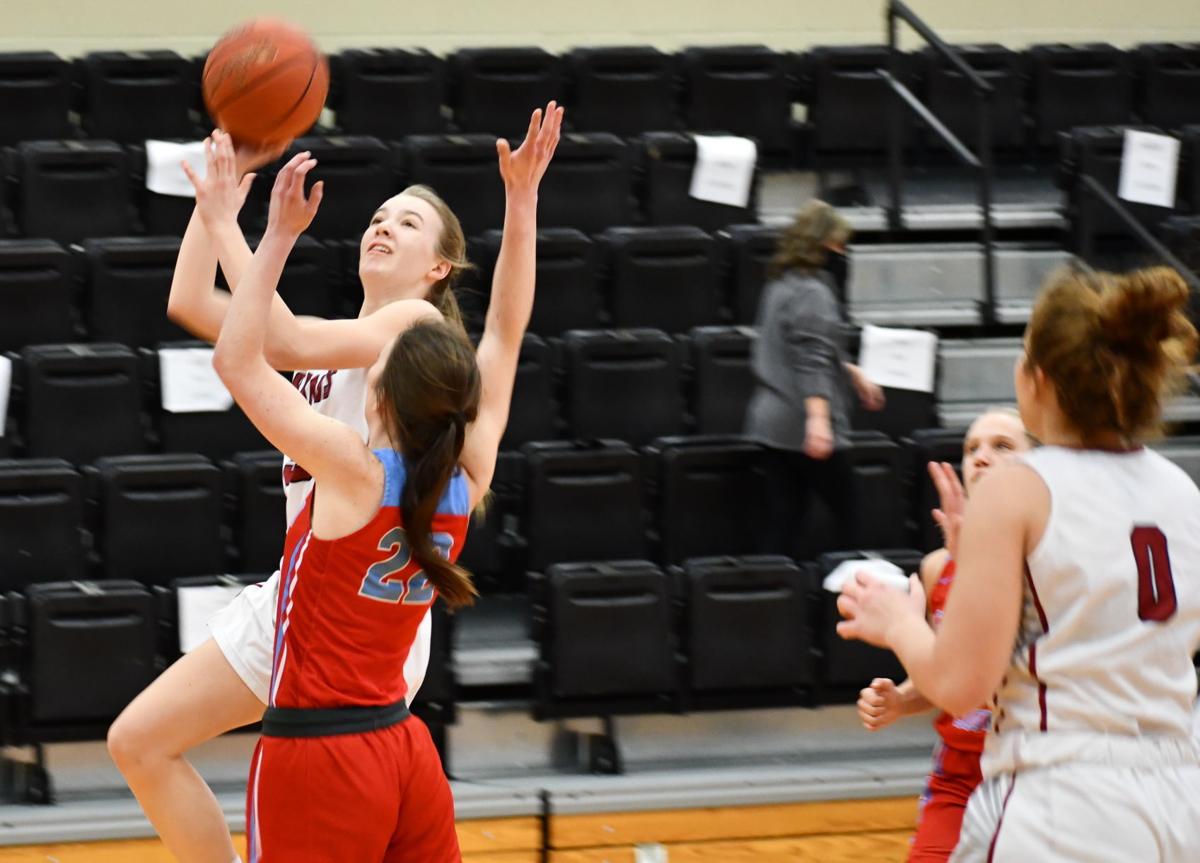 McCracken County freshman Mikee Buchanan looks to get off a contested shot over Calloway County’s Sunny Clark during Saturday’s game. 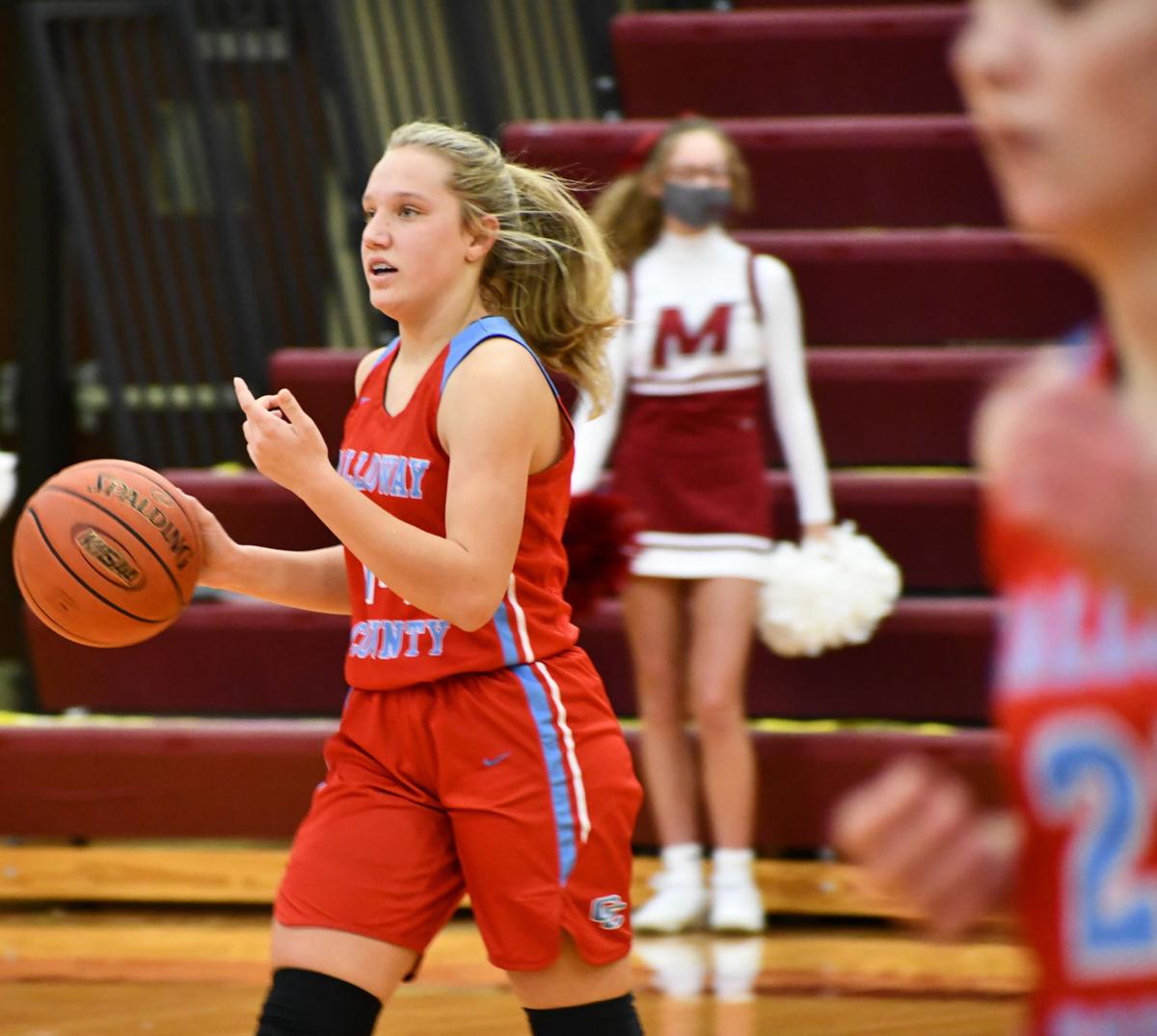 Calloway County’s Skylar Waller dribbles the ball up the court during Saturday’s game at McCracken County. Waller finished with 22 points.

McCracken County freshman Mikee Buchanan looks to get off a contested shot over Calloway County’s Sunny Clark during Saturday’s game.

Calloway County’s Skylar Waller dribbles the ball up the court during Saturday’s game at McCracken County. Waller finished with 22 points.

With somewhat of a sluggish start Saturday, the McCracken County girls basketball team appeared to pick up where it left off in Friday’s 20-point loss to Louisville Mercy. But the Lady Mustangs finally found a groove in an impressive second quarter that spurred them to a 65-42 victory over visiting Calloway County.

“I love the resiliency of our kids,” McCracken head coach Scott Sivills said. “Calloway has had our number for the last three or four years, so this is a good win for us. It’s a good bounce-back from last night. We had a great team effort tonight. I thought all of our kids played terrific.”

It was the second quarter that proved to be the difference-maker in Saturday’s game, as the Lady Mustangs outscored the Lady Lakers 27-3 in the period to take a commanding 38-19 halftime lead after trailing 16-11 at the end of the first.

“In the first quarter, we had to get on the girls a little bit to get them to refocus, and they did that,” Sivills said.

They did so in a big way, opening the second quarter with an 8-0 run and closing it on a 15-0 spurt thanks to lockdown defensive play and solid offensive execution.

“We made shots and got people going,” Sivills said. “I knew it would take us a while in that first quarter because we were so gassed from last night. But we had a great second quarter.”

Back-to-back 3-pointers from freshman Claire Johnson and junior Lacey Cruse got the second-quarter scoring started. Those two ended up leading the Lady Mustangs (7-4) in scoring with 15 and 11 points, respectively. Cruse made three of McCracken’s five triples in the game.

“Lacey Cruse came in off the bench and made some big threes for us to kind of get us going,” Sivills said. “And I thought Claire Johnson had a terrific game. She’s coming into her own.”

“I love how Shymiya Daye scored in double figures. If she does that for us, that gives us a whole different dimension that we haven’t seen in a while,” Sivills said. “Shymiya is very capable of doing that. It’s just that she loves to pass, and she does all the other things like rebounding and getting deflections and steals. But if she’s scoring, then we may be a tough out come March.”

McCracken’s 15-0 run over the final 4:53 of the opening half was highlighted by four points each from Johnson and freshman Mikee Buchanan and a 3-pointer from junior Haidyn Green.

The Lady Mustangs didn’t let the halftime break slow them down, as they opened the third quarter with a 10-0 run spurred by four points each from Johnson and sophomore Caroline Sivills. All told, McCracken held the Lady Lakers (11-5) scoreless over a period of nearly 10 minutes spanning the end of the second and start of the third quarter en route to taking a 48-19 lead thanks to that combined 25-0 run.

“It’s our defense that really won us this game,” Sivills said. “We converted a lot of deflections into steals and steals into points.”

The Lady Mustangs cruised to the victory after taking a 53-28 edge into the fourth quarter. Buchanan and freshman Grace Henderson chipped in eight points apiece in the victory to go with six from Sivills in what was a balanced scoring afternoon for McCracken.

The Lady Lakers, meanwhile, featured just one double-figure scorer, eighth-grader Skylar Waller, who finished with a game-high 22 points. Junior Sunny Clark was the next-highest scorer for Calloway with six points.

Looking ahead, Sivills said his team would use Saturday’s game to build off of as it tries to return to some sense of a normal schedule following the past week’s snowstorm. The Lady Mustangs are scheduled to play home games against McLean County and Trigg County on Tuesday and Thursday, respectively, followed by a road game at Webster County on Friday.

“We have three big games next week. The big thing for us is getting back to some form of normalcy. The pandemic plus all this crazy weather has been tough for all of us,” Sivills said. “I like how we’ve competed in back-to-back games with very little practice time together. It’ll be good getting back into the gym to work on some things in practice and get our legs back underneath us again and get in better shape, and we’ll see how we do going forward. We’re just trying to finish strong going into March.”