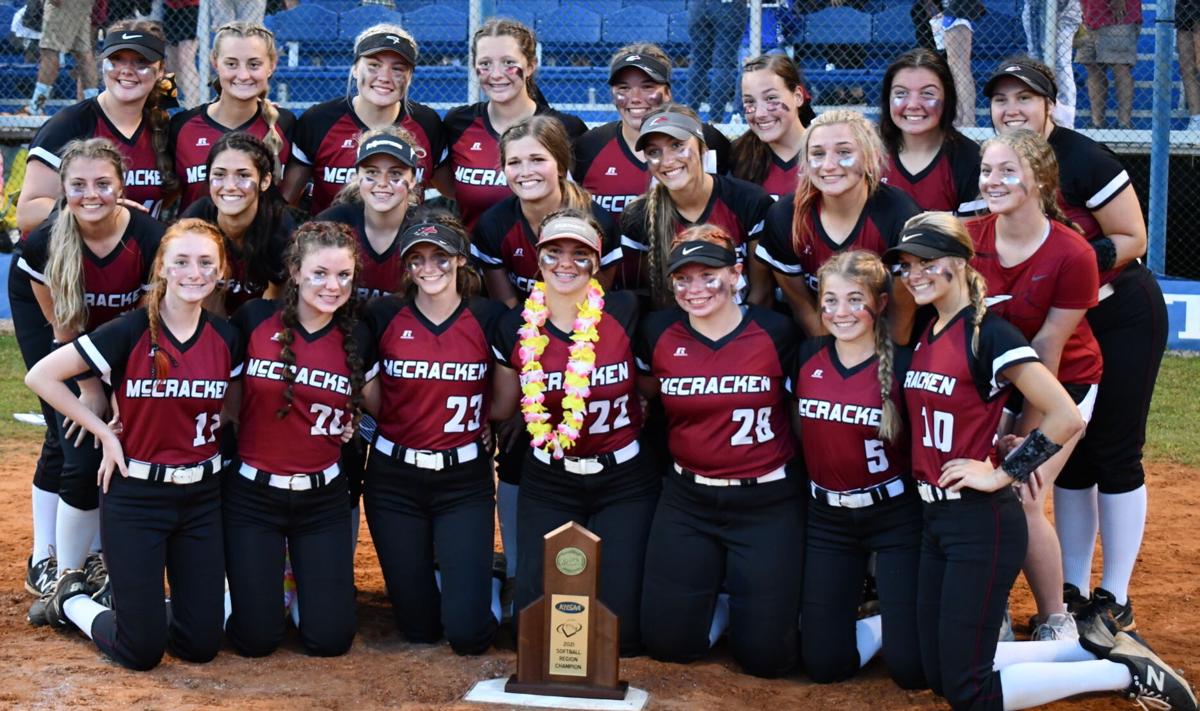 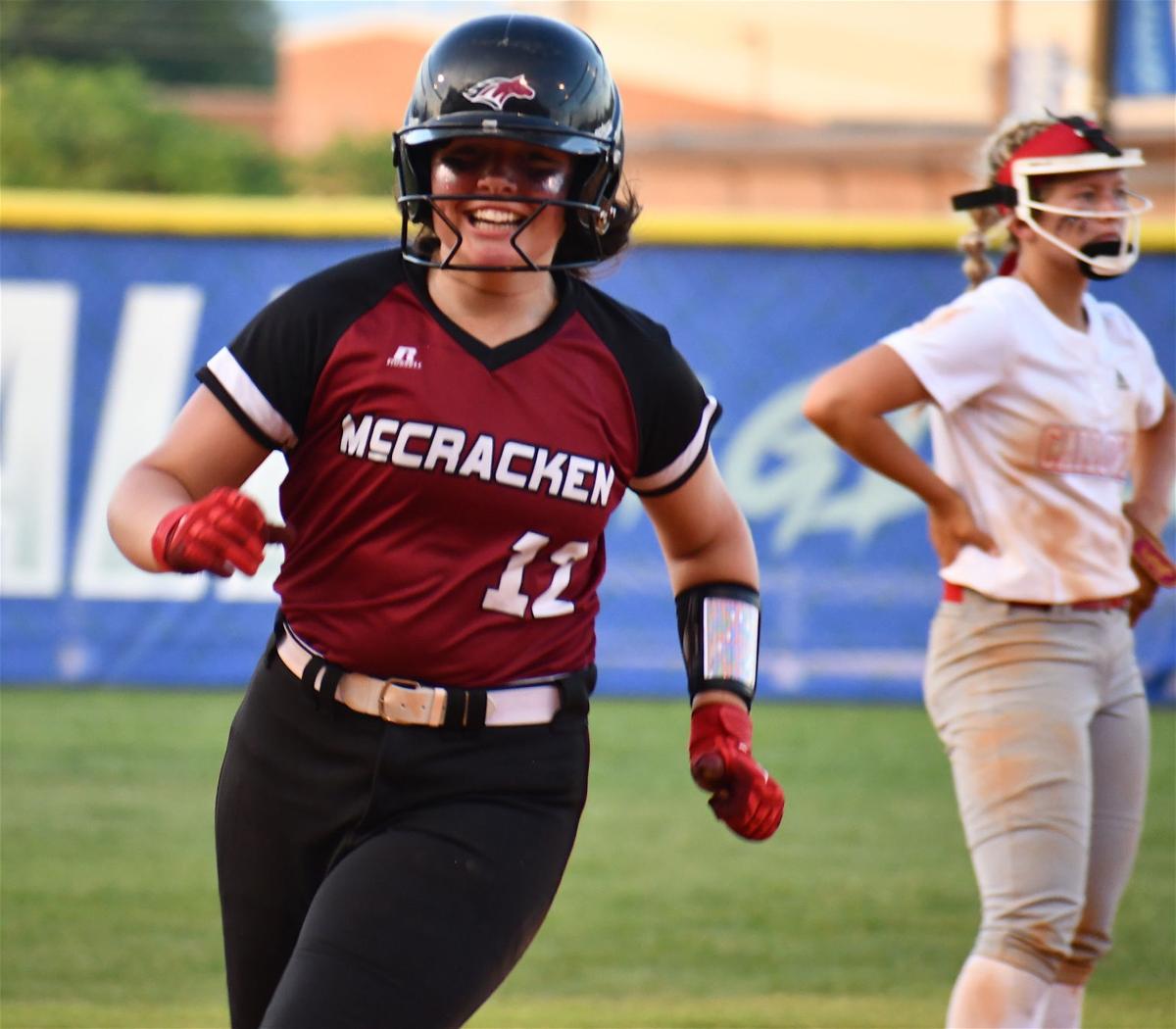 McCracken County’s Izzy Story trots toward third base after hitting a three-run homer to cap a 10-run sixth inning for the Lady Mustangs in Monday’s game against Calloway County. 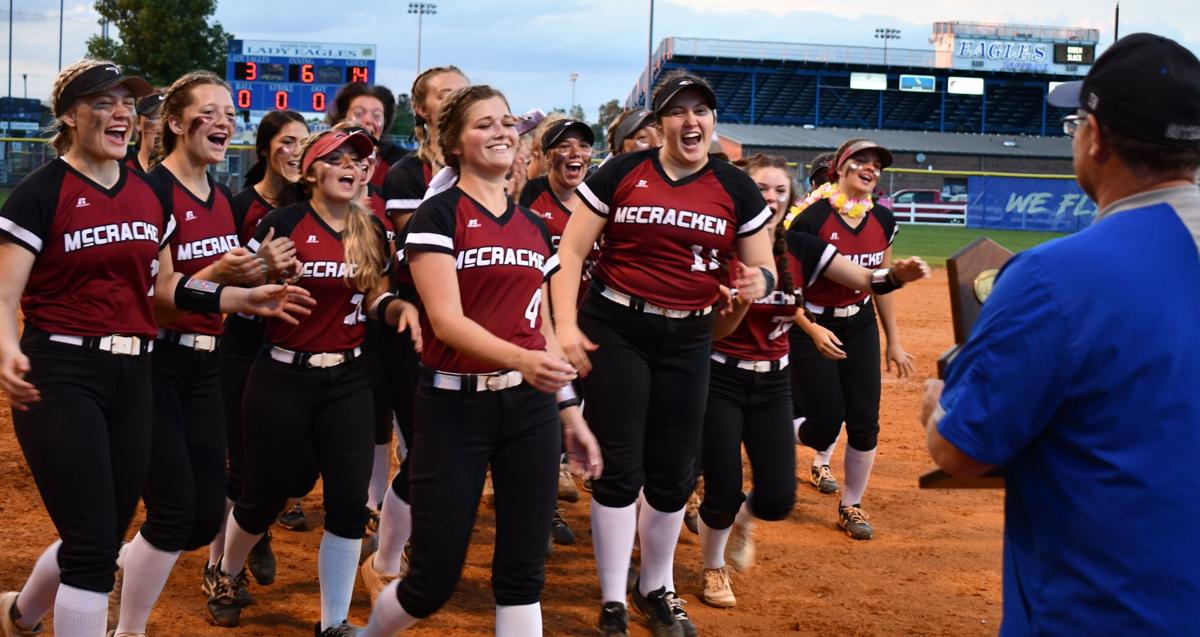 McCracken County’s Izzy Story trots toward third base after hitting a three-run homer to cap a 10-run sixth inning for the Lady Mustangs in Monday’s game against Calloway County.

MAYFIELD — The McCracken County softball team picked a great time to put together one of its most dominant outings of the season Monday in the First Region Tournament championship game.

Sophomore starting pitcher Ally Hutchins had a no-hitter through 51/3 innings, and the Lady Mustang offense strung together a 10-run sixth frame in a 14-3 rout of Calloway County at Graves County High School. The victory marked their fifth region title in the past seven seasons but first since 2017.

“This feels great, especially with us not making it to the championship game in my freshman and sophomore years and not being able to play last year (due to COVID-19) and with this being my last year to ever play,” McCracken senior Ashby Murt said after the game.

“This feels great,” she said. “We’ve been working our butts off this whole season, and we came out today fired up and ready to go.”

Smithson ended up being named the tournament MVP after reaching base three times on Monday with a walk and a pair of singles to go with three RBIs. In McCracken’s three tournament games, she totaled two doubles, five singles and six RBIs.

“It means so much,” Smithson said of being named MVP. “I’ve been playing since I was 4 years old, and it feels great to be able to show what I can do out on the field and continue with my sport.”

Hutchins, meanwhile, pitched a dominant first five innings before allowing Calloway to get on the board in the sixth. She faced just one batter more than the minimum over the first five frames and struck out the side in the fifth. The sophomore threw 79 pitches over six innings, giving up the three runs on two hits and one walk while striking out six.

“She did great,” Murt said of Hutchins. “She’s pitched great all season, especially to be just a sophomore. She has a bright future. She’s a great pitcher and a great player.”

Hutchins said she found her typical rhythm with freshman catcher KG Walker and attributed her shaky sixth inning to easing up with the victory in hand.

“I always throw really good with KG — we’re usually pretty well in sync. It was just like practice at this point. I was really ready for this game,” she said. “I think I just kind of got ahead of myself in the sixth inning. I kind of wanted to get the game over with because we were all really hyped up. But eventually we were able to settle down and get the three outs.”

Monday’s game was much different from the last time these teams met. McCracken and Calloway split a doubleheader on May 26 with both games needing extra innings to decide.

Calloway junior starting pitcher Izzy Housden held McCracken scoreless through the first three innings, but the Lady Mustangs broke through in the fourth via an RBI single from Smithson and an RBI double from Joiner.

McCracken plated two more in the fifth with an RBI single from Murt and a passed ball.

Calloway head coach Kady Arant brought in senior Caitlyn Powers to pitch in that fifth frame but would eventually bring back Housden as the game got away from the Lady Lakers in the sixth.

The Lady Mustangs tallied eight of their 13 total hits in the sixth inning, but none was bigger than Story’s three-run homer that soared over the left-field fence for a 14-0 lead. The inning also included a two-RBI double from Fox, two-RBI singles from Smithson and Joiner and an RBI single from Murt.

“Once we got one hit, then we just rallied together,” Murt said of the offensive breakthrough. “That’s usually how it goes for us — once one person hits, then we follow them up together pretty well.”

Hutchins hit Calloway senior Kylie Stallings with a pitch to lead off the bottom of the sixth and then gave up her first hit of the game — a one-out double to junior Adison Hicks. Senior Paige Kramer walked to load the bases, and sophomore Emerson Grogan followed with a two-RBI double. The Lady Lakers scored their final run on an RBI groundout from Housden.