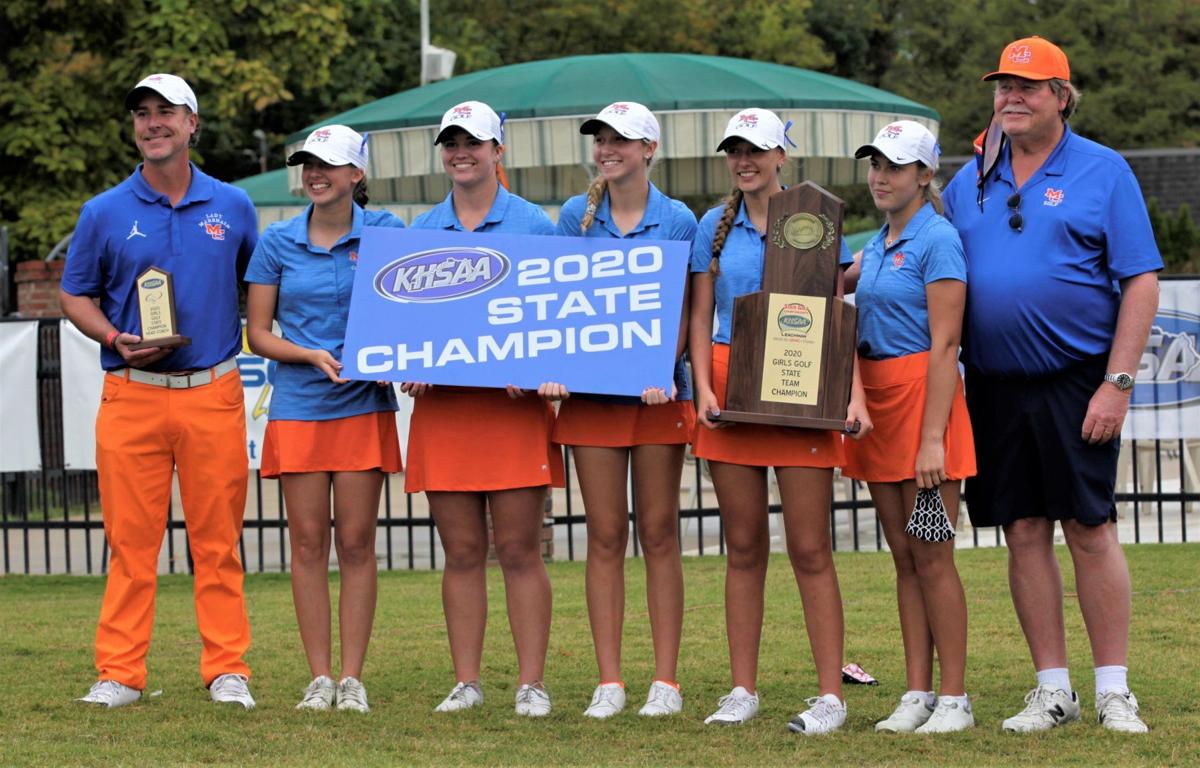 A second-day 305 in the KHSAA Girls Golf State Tournament helped the Marshall County Lady Marshals come away with an emphatic 39-stroke championship win on Saturday at Bowling Green Country Club in Warren County. 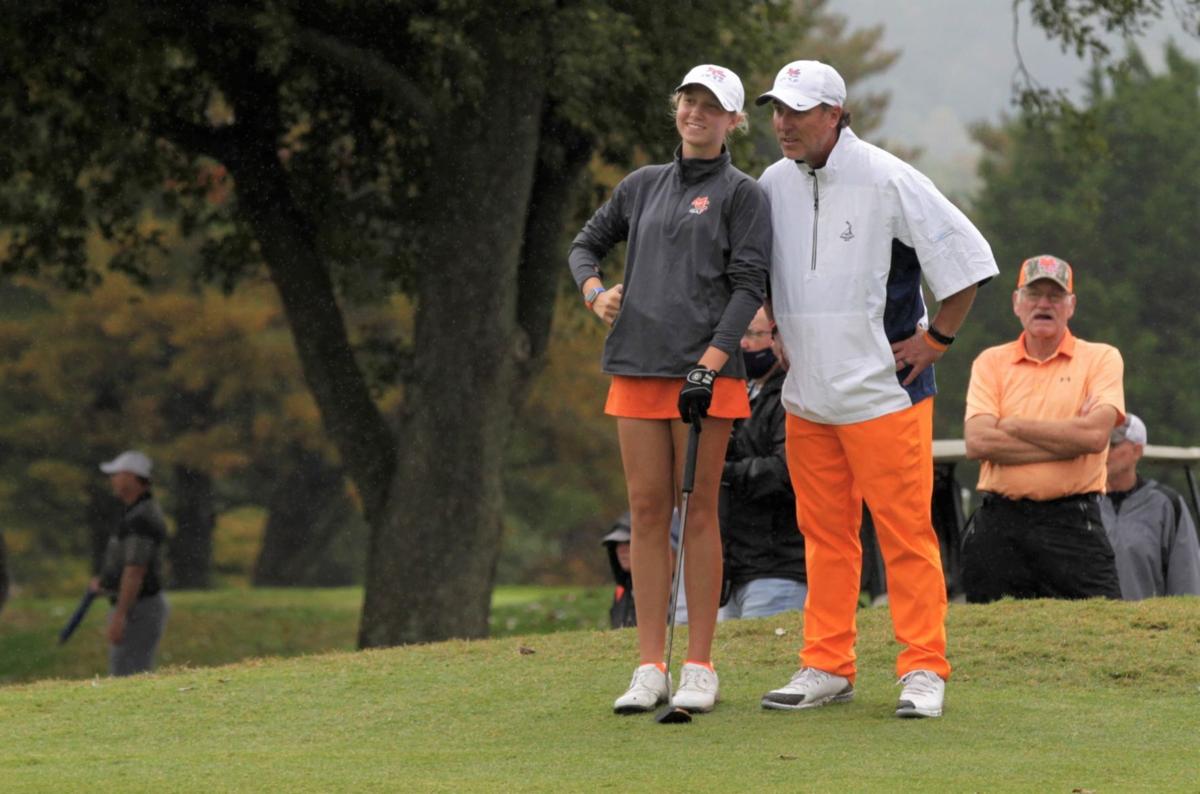 Marshall County’s Trinity and Aaron Beth were all smiles at the end of Saturday’s round, as the Lady Marshals knew the team title was secure. Trinity, in her first state tournament, would finish fourth overall with a 5-over 149.

A second-day 305 in the KHSAA Girls Golf State Tournament helped the Marshall County Lady Marshals come away with an emphatic 39-stroke championship win on Saturday at Bowling Green Country Club in Warren County.

Marshall County’s Trinity and Aaron Beth were all smiles at the end of Saturday’s round, as the Lady Marshals knew the team title was secure. Trinity, in her first state tournament, would finish fourth overall with a 5-over 149.

BOWLING GREEN — Maybe in a couple of decades, Trinity Beth, Savannah Howell, Megan Hertter, Katie Roberts and Elsie Riley will understand the full magnitude of what transpired on a soggy Saturday afternoon at Bowling Green Country Club in the final round of the 2020 KHSAA Girls Golf State Tournament.

Owning a precarious six-shot lead on the field after a touch-and-go Friday morning, these Marshall County Lady Marshals pulled away for a 39-shot victory for a state title with a two-day total of 314-305-619 — besting South Warren, two-time defending champion Lexington Christian and Sacred Heart by a wide margin.

It goes down as one of the more stunning team performances in Kentucky girls golf history, though not particularly because of the outcome. After all, Marshall County was favored to win after its stellar championship showing two weeks ago at the Kentucky Golf Coaches Association All-State Tournament in Lexington.

It’s just the amount of new history written, as these Lady Marshals became just the second First Region team to ever secure a state title, joining the 1977 Caldwell County Lady Tigers, and the 619 (43-over) is the third-best finish in state history behind Sacred Heart’s 615 in 2013, and Sacred Heart’s 617 in 2017.

“I understand the impact this is going to have on the rest of their life, because 20 years from now, we’ll come back together and celebrate the 2020 state championship,” noted an emotional coach in Aaron Beth. “They don’t understand it yet because they’re kids, but I’ve been around it. You strive to win and win and win, but you can win a lot of games and still come up short and not have that (title). We’re the only team who got to win their last match.”

With wisps of wind and rain trailing in from the outskirts of the Delta Depression, teams and KHSAA officials weren’t sure how much — if any — of the second round would even be completed.

Thankfully, torrential downpours never came, but it didn’t stop the Lady Marshals from shedding shots right out of the gate.

By the turn, the Lady Marshals had turned a six-shot advantage into 30-shot advantages against the likes of Faith Martin and McKenna Stahl’s South Warren squad, the Abigail Sutherland and Emily Warner’s Sacred Heart squad, and the Christy Ann Carter and Carter Lankford’s LCA squad.

“We didn’t know for sure if we were going to get to finish the day, because of the rain, so we wanted to sure we got it done in our first few holes and however many we could play,” said Trinity Beth, who finished fourth overall in her first state tournament appearance with a two-day 5-over (149). “So we just really got off to a big start.”

Playing in her seventh state tournament, Howell was perhaps the steadiest of all on Saturday, sitting at 4-under after 11 holes (with no bogeys) and approaching the top of the individual leaderboard ... before a double-bogey at No. 12, and bogeys at No. 14, No. 15 and No. 17 deflated a little of the magic.

“I was glad I started out really well,” she said, finishing fifth overall with a 6-over (150). “I wish I could’ve finished better, but it still gave me a good cushion, and I’m glad it helped the team out a lot to win by 39.

“I’ve always liked this course, and I feel comfortable playing it a lot. It helped me this week, knowing I was comfortable here and at the state tournament.”

While Beth, Howell and Hertter were all expected to contribute for both days, it was Roberts who was the wild-card in this scenario.

And just like she did two weeks ago on her home course in the First Region Tournament (firing a 74), she picked Saturday to flip over an ace ... firing a 6-over 78 after shooting an 85 on Friday.

The 6-over ended up being Marshall County’s third-best score of the day, just edging out Hertter’s 80.

“You get your No. 4 person to do that, it’s special,” Aaron Beth said.

The back-nine wasn’t as kind to the Lady Marshals as the front, but it wasn’t kind to anyone over this two-day sortie. Holes No. 13-18 were particularly painful on both days for all the players, and on Saturday, the Lady Marshals went 14-over on the stretch with just three birdies — one each from Howell, Beth and Roberts.

But the one from Beth came in the final group of the afternoon and on Marshall County’s final, masterful stroke: a 10-foot putt on No. 18, leading to a warm, championship embrace between a father-turned-coach, and a daughter-turned-star.

“You couldn’t top it off any better.”

The Lady Marshals lose no one to graduation, so one has to ask: is it too early to talk of what’s to come?