Marshall County senior Cayson Conner dribbles the ball up the court in transition during Friday’s game against Paducah Tilghman. 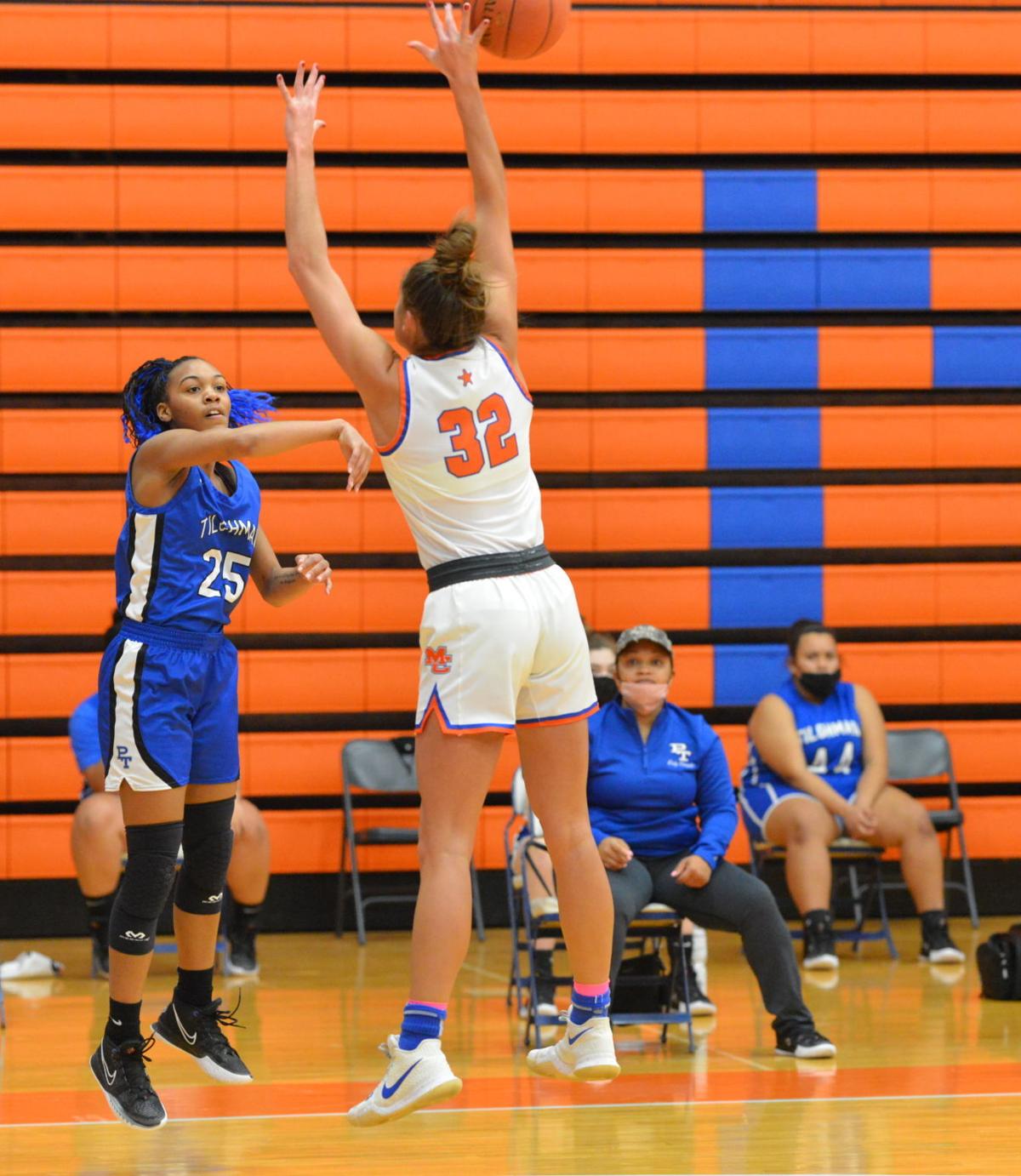 Marshall County senior Cayson Conner dribbles the ball up the court in transition during Friday’s game against Paducah Tilghman.

DRAFFENVILLE — Just when Region 1 champion Marshall County thought it was headed for success at Rupp Arena last season for the KHSAA Girls Sweet 16 Basketball Tournament, that experience ended up being canceled right before they were to take the court because of the COVID-19 pandemic.

So the Lady Marshals are back with a purpose this year.

“Coming off of last year and not getting to play at Rupp Arena, I think we were all fired up and wanting to put in the extra work to make it back there this year,” senior Cayson Conner said following Friday’s 76-19 rout of Paducah Tilghman.

The Lady Marshals followed up that victory with a 66-41 win at Ohio County on Saturday, improving their record to 6-1 on the season. They’re currently riding a six-game winning streak after opening the season with a 67-60 loss at Bethlehem.

“Starting out with Bethlehem, that was a tough game. They’re a great team, so that really showed us where we were at as a team,” Conner said. “We’ve won all of our games since then, so that’s been good, and I hope we can keep this going.”

The Lady Marshals finished last season with a record of 24-9 and returned a veteran-laden group that includes six seniors for 2021. A close loss to Bethlehem, an 8-0 team that entered last week ranked No. 2 in the Associated Press poll, was nothing to hang their heads over, and they’ve won every game since by an average margin of nearly 31 points. They’re scoring 62.6 points per game while allowing just 37.1 points per contest.

Head coach Aaron Beth said he’s especially proud of his team’s defensive play and how it has improved over the course of the season.

If you advance in the postseason, you’re going to have to play defense day in and day out, so the girls have really started buying into that. We’re trying to change things up a little bit with some presses and zone looks, and our man-to-man has been good all year, so we have a lot of versatility both on offense and defense.”

Offensively, the Lady Marshals have three players — Conner (15.7 points per game) and juniors Halle Langhi (13.0) and Jada Driver (10.6) — averaging double-figure scoring, while seniors Layne Pea (8.0), Graves County transfer Sophie Galloway (7.1) and Presley Jezik (6.6) aren’t far behind. Conner has scored in double figures in every game this season, including a high of 25 points Saturday against Ohio County.

“She’s a super leader,” Beth said of Conner. “She does all the little things and doesn’t care if she scores or not. She can score, and I actually want her to shoot more part of the time, but she’s so unselfish and is a great person as well as a great basketball player.”

While Conner leads the way, Beth said the entire group is special.

“Their character and the personalities and the unselfishness and the chemistry — those are things that are the intangibles that a lot of teams don’t have, and this bunch has it,” he said. “You put those things with the talent and the effort and the positive attitudes and the work ethic, that’s what makes them so special.”

The word “special” also came up as Conner described this year’s team.

“This team is so special,” she said. “We’ve played together since we were 6 years old. Sophie (Galloway) was with us when we were young and then moved off and came back, and having her back with us is special. The team chemistry is awesome. We love each other and love hanging out on and off the court. It couldn’t be any better.”

Beth added that this year’s group is a joy to coach, as the players take his teachings to heart.

“All of them have improved in some way, which makes coaching very enjoyable,” he said. “When you can suggest things for them to do to correct things, and then for them to go out and do it and get better, that’s very rewarding as a coach.”

Beth’s talented, tight-knit team entered last week at No. 8 in the AP poll and could rise even further when the new poll results are released Monday. The Lady Marshals are basically where Beth thought they’d be at this point of the season.

“You always have high hopes and high expectations, but with this group, they were really high. But at the same time, you never know how it’s going to go until you start playing games,” he said. “I couldn’t be happier with how we’ve started off. I feel like we’re getting better week to week, and hopefully we’ll be playing our best basketball come March.”

It’s all about putting in the work to make that trip to Rupp a reality this year, Conner added.

“If we just keep working, there’s no limit to how far we can go,” she said. “We’ll keep working and see what happens.”