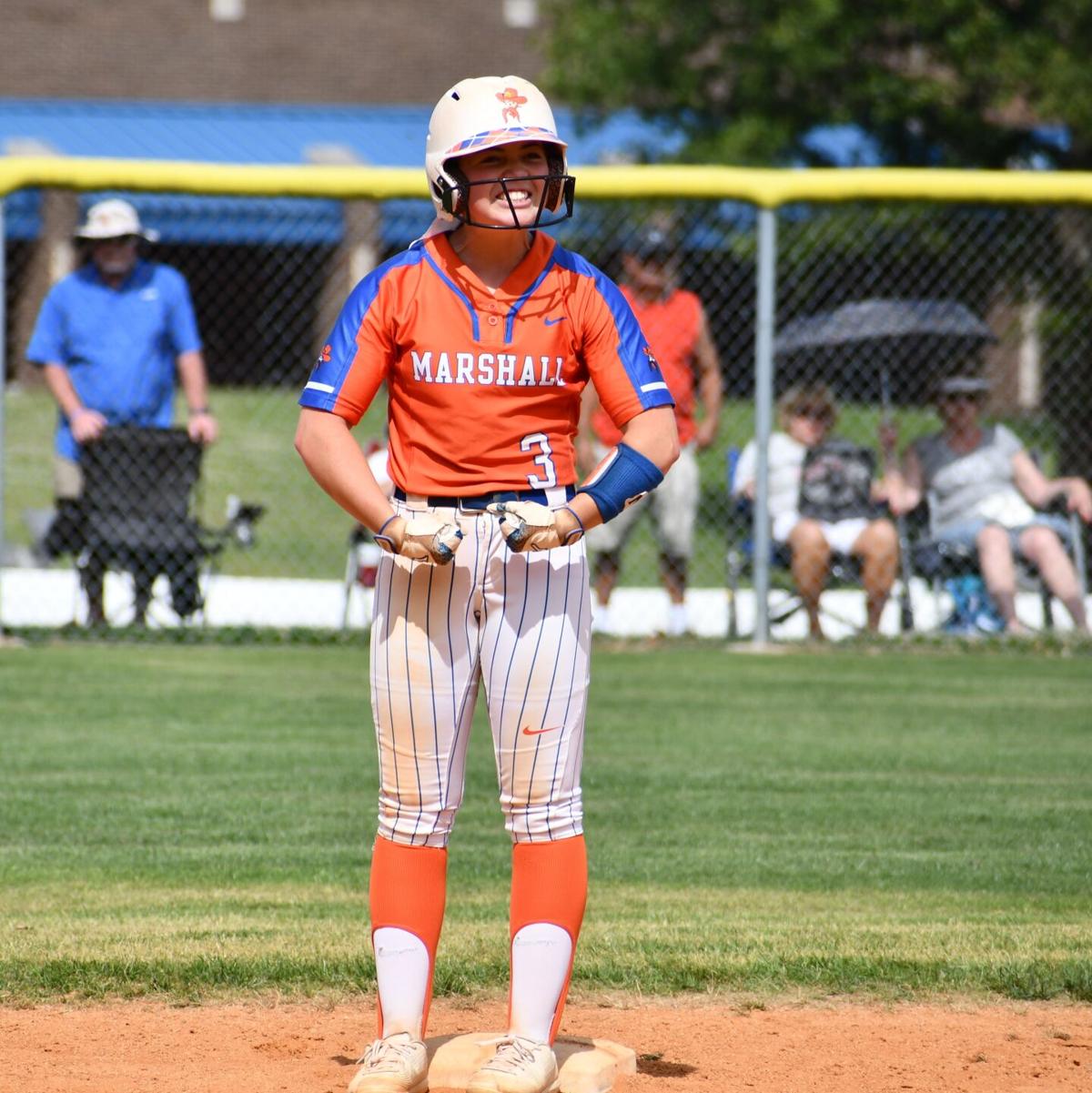 Marshall County junior Charley Pursley celebrates at second base after hitting what proved to be the game-winning RBI double in the eighth inning of Saturday’s First Region Tournament quarterfinal game against Graves County. The Lady Marshals won, 5-3. 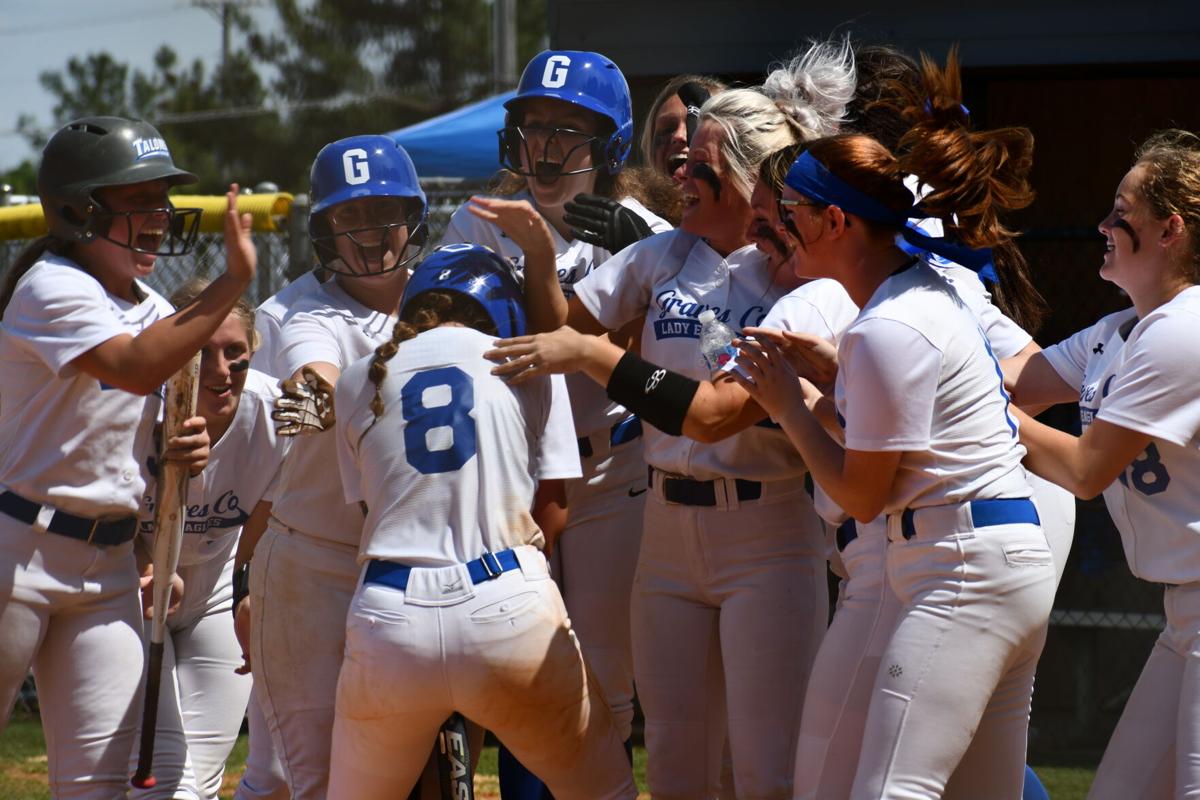 Graves County freshman Bailey Wimsatt (8) is surrounded by her teammates at home plate to celebrate her two-run home run that tied the score at 2-2 in the fourth inning of Saturday’s game against Marshall County.

Marshall County junior Charley Pursley celebrates at second base after hitting what proved to be the game-winning RBI double in the eighth inning of Saturday’s First Region Tournament quarterfinal game against Graves County. The Lady Marshals won, 5-3.

Graves County freshman Bailey Wimsatt (8) is surrounded by her teammates at home plate to celebrate her two-run home run that tied the score at 2-2 in the fourth inning of Saturday’s game against Marshall County.

MAYFIELD — The last time the softball teams from Marshall County and Graves County met, they needed extra innings to decide the outcome. It was the same story Saturday, but the outcome was of much greater import, as a berth in the First Region Tournament semifinals was on the line. After Graves had tied the game in the seventh inning, Marshall answered with a pair of runs in the eighth and held off the host Lady Eagles for a 5-3 victory.

“Today was really exciting,” Marshall head coach Mallory Newton said after the game. “I felt like Graves played a really good game and fought hard. They’re a really solid team, so for us to get the win was huge.”

The victory advances the Lady Marshals (25-12) to the semifinals to face McCracken County, which defeated Carlisle County, 11-1, in Saturday’s final quarterfinal game.

The Lady Eagles (12-9) didn’t make it easy, though. Much like Marshall’s 3-2 win over Graves in nine innings on May 24, Saturday’s matchup went down to the wire.

“Graves is a really good team, so we knew we had to play our absolute best,” Marshall junior Charley Pursley said.

Pursley ended up playing a big role in the eventual victory, finishing with a double, single and two RBIs. Her RBI double in the top of the eighth inning proved to be the game-winner.

“I knew I had to do my job, so I was just focusing on getting the run in,” Pursley said of her eighth-inning at-bat.

Pursley’s heroics were set up by a seventh-inning comeback from the Lady Eagles. Trailing 3-2, Graves led off with a single from seventh-grader Ginger Martin, who was bunted to second by senior Erin Myatt. A strikeout of freshman Anna Rogers put the Lady Marshals one out away from victory, but sophomore Ellie Davis came through with a game-tying RBI double to left field that ended up sending the game to the eighth inning.

Unfazed by the newly tied score, the Lady Marshals responded in the top of the eighth with a leadoff bunt single from senior Layne Pea. Two batters later, Pursley drove in Pea with her double to left field.

“Charley has been clutch all year. She’s a really solid ballplayer,” Newton said. “For her to come through like that and be a leader, I’m really proud of her.”

The Lady Marshals added an insurance run with a bunt single from senior Gabbi Lovett after Pursley had advanced to third on a wild pitch, and they entered the bottom of the eighth with a 5-3 lead to protect.

“Graves did a good job of fighting back, and I think we answered really well,” Newton said. “Layne Pea got us started, and for us to come up with two more runs showed how much fight we have.”

After getting a solid seven innings from freshman starting pitcher Gracelyn Darnall, Newton put Lovett in the circle for the save opportunity, and the senior delivered. She allowed a one-out single to junior Abbey Williams but got the next two batters out to preserve the victory.

The combination of Darnall and Lovett proved quite effective in limiting the Lady Eagles’ offense. Darnall allowed the three runs on five hits to go with five strikeouts and did not issue a walk over seven innings.

“I’m really proud of Gracelyn. She’s been really consistent all year long,” Newton said. “For her to come out in this kind of situation as a freshman says a lot about her composure and attitude.”

Prior to the seventh inning, Graves’ only other scoring came in the fourth frame. Williams led off with a single, and freshman Bailey Wimsatt followed with a two-run homer over the left-field fence.

Wimsatt’s homer tied the score at 2-2 after Marshall had plated a run in each of the second and fourth innings. Thanks to some clever base-running with the bases loaded, senior Sarenna Tomassi stole home to score in the second, and an RBI sacrifice fly from Pursley plated the run in the fourth.

The Lady Marshals took a 3-2 lead in the fifth on an RBI groundout from senior Kinley Edwards but were unable to hold that edge in the seventh.

The Lady Marshals out-hit the Lady Eagles 14-6 but stranded 12 base-runners as Wimsatt was able to work out of several jams. Seven of those hits were bunts or other balls that stayed in the infield, as Marshall’s small-ball approach proved quite effective.

“Small ball is the name of the game,” Newton said. “We have a really fast team, and you have to capitalize on that speed, so being able to lay down those bunts and hit ground balls to put pressure on the defense was what made us so successful today.”