American flags lined the track around the field in remembrance of the 20th anniversary of 9/11. 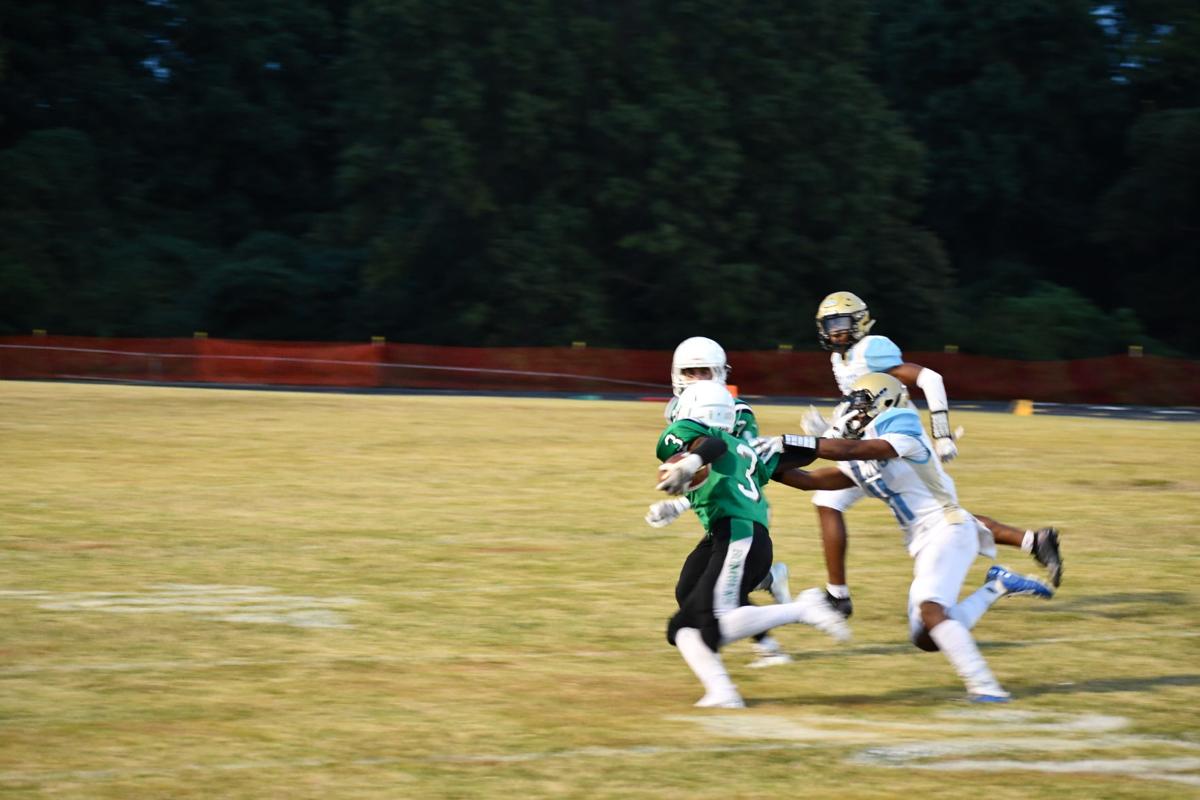 Jerrico Wilson runs down field with ball in hand as the defense looks to take him down.

American flags lined the track around the field in remembrance of the 20th anniversary of 9/11.

Jerrico Wilson runs down field with ball in hand as the defense looks to take him down.

Ballard Memorial and Fulton County squared up Friday night, Sept. 10, each looking for their first win of the season.

Both teams came into the game 0-3 but only one would be victorious in adding a number to the win column.

The Pilots claimed that right with an 8-0 win in a game where neither team could hold onto any momentum due to a plethora of penalties.

Before the game, veterans of the United States military were honored for their service in the wake of the 20th anniversary of 9/11.

Veterans from various branches of the military were welcomed onto the field for the National Anthem and pre-game prayer before kick-off, setting a tone of remembrance for the rest of the night as fireworks sounded behind the scoreboard.

The Bombers had their first big play of the night when Ballard’s Carson Buchanan took the ball 21 yards down field; add another 15 yards after the play thanks to a penalty against the Pilots and the Bombers were in contention for a touchdown.

Several penalties took Ballard in the opposite direction and resulted in a turnover on downs.

With just over three minutes left in the first quarter Fulton’s Damien Hill caught a 40-yard pass from quarterback Max Gibbs for a touchdown and the lead.

The Pilots would finish the drive with a two-point conversion and boost their lead to eight.

A handful of interceptions were thrown by both quarterbacks, keeping either team from scoring the rest of the half.

Though, Fulton did convert big plays on second and long for 27 yards. The half would end with an interception within the 10-yard line picked off by Bomber Jamison Smith.

Changes were made at quarterback for the Bombers, as sophomore Daniel Meinschein hobbled off the field after limping most of the second quarter.

Freshman Hunner Bealmear took his place, as the Bombers looked to turn the game around.

With just nine yards from the end zone and hard push to get there with under a minute to play in the third quarter the Bomber lined up for the first down.A fumble under center with 22 seconds remaining would end that hope and led to Fulton ending the quarter on a long run.

The score would remain the same for the duration of the game as flags continued to fly against both teams and pace of play stayed slow.

Up next for Ballard Memorial will be a trip to Hopkins County to play Hopkins County Central on Friday, Sept. 17 while Fulton County crosses the state line to play South Fulton, Tenn., the same evening.