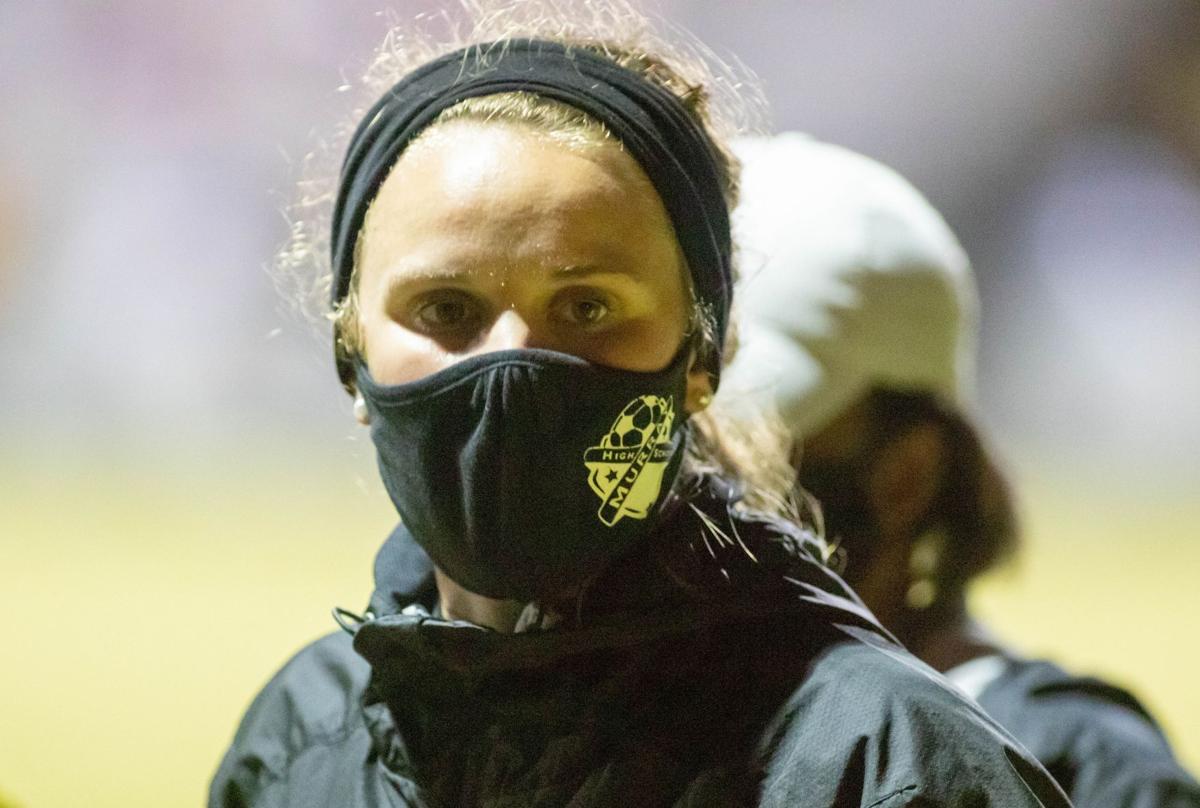 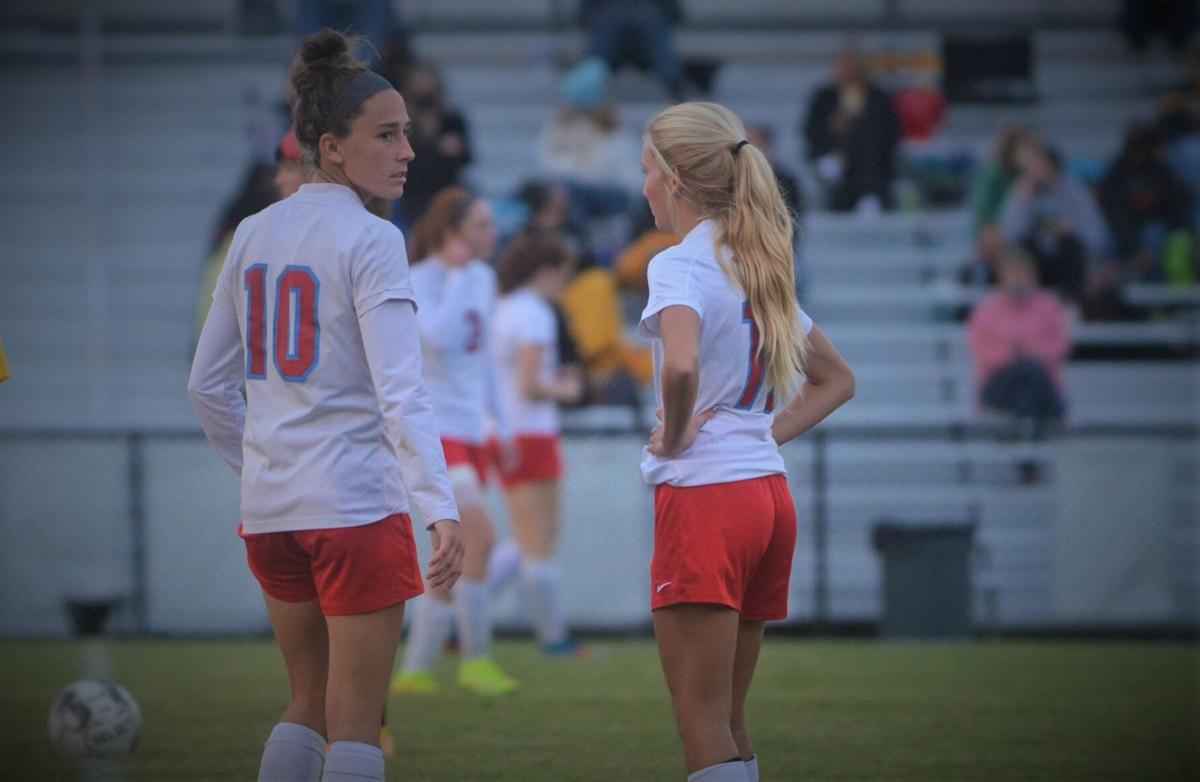 Above: After scoring 28 goals and six assists in 13 games this season, Calloway County’s Elle Carson has been selected as the 2020 Paducah Sun All-Purchase “Player of the Year” for girls soccer. Left: Murray High School girls soccer coach Shauna Traylor has been named the 2020 All-Purchase “Coach of the Year.”

Above: After scoring 28 goals and six assists in 13 games this season, Calloway County’s Elle Carson has been selected as the 2020 Paducah Sun All-Purchase “Player of the Year” for girls soccer. Left: Murray High School girls soccer coach Shauna Traylor has been named the 2020 All-Purchase “Coach of the Year.”

She had 29 goals and 16 assists as a sophomore.

And in her final year for Calloway County, she had 28 goals and six assists.

One of the fastest players in west Kentucky, and with strong foot skills, First Region coaches fittingly have selected Calloway County’s Elle Carson to be the 2020 Paducah Sun All-Purchase Player of the Year for girls soccer.

The longtime Lady Laker, who recently committed to Bethel University for soccer, spent the last three years being a primary facilitator with a knack for scoring alongside the likes of Zoe Stom, Kirsten Houston and Kallie Garrison.

But this year, Carson had to pass less and score more for first-year coach Savana Thielen, and Calloway County finished 7-3-3 in a pandemic-shortened schedule.

Carson had the lone goal in a Sept. 22 home win over McCracken County, scored seven goals in three matchups against Murray (where the Lady Lakers went 1-0-2), and notched a goal in every game until the season finale in a 4-0 loss to Marshall County in the Second District semifinals.

“I’ve always loved playing soccer ever since I was little, so it’s always been something that I’ve worked hard at,” Carson said. “Over the summer, I knew it was a goal that I could possibly achieve in being a regional player of the year. I worked really hard this summer, especially with my dad. We’d shoot a lot at the school. And I shot a lot with Ethan, my brother, during the quarantine period.

“(But) I didn’t want to let my teammates down, or my coaches, because I knew they had put a lot into the season. In order for us to get to where we wanted to be, I knew I had to be at my best. And I think that’s what really pushed me.”

Carson will have to take this mentality into the 2020-21 high school basketball season, where she’ll undoubtedly be asked to become Calloway County’s top option with the basketball in her hands.

And then, she’ll turn back to soccer, preparing for a collegiate slate she didn’t know she’d even pursue until she felt the yearning this past summer.

“It’s definitely very humbling, but very exciting, at the same time,” she added. “I didn’t really decide until this year that I wanted to play college soccer. But once I decided I really wanted to, I’m super excited to learn from coaching down in Bethel, my game is going to grow even further. It gives me an opportunity to play for another four years, and it’s close to home so my parents and family can come and watch me if they want to. That’s the most exciting part about it for me. I’ve never not had my dad as a coach, and just having him on the sideline supporting me is exciting, too.”

After starting the season 1-4 with tough losses against Marshall County, McCracken County, Henry County (Tennessee) and Calloway County, the Murray Lady Tigers bounced back in a big way — going 8-3 the rest of the way en route to a 2020 First Region runner-up finish.

Along that path came an All “A” Final Four finish, a critical 4-3 win over Graves County in the Second District semifinals and a 4-3 win over McCracken in the First Region semifinals.

This complete reversal, along with the steady development of some younger talent, helped push Shauna Traylor into All-Purchase Coach of the Year honors — a selection from peers following the completion of the season.

“I’m very honored,” Traylor said. “My husband and I talk soccer a lot, and obviously in the past, I’ve had some really amazing teams, and sometimes we’ve ended up on the winning side of the tournament, and other times we haven’t.

“But honestly, I’ve told Zack (her husband), I felt like this year was the first year where I had an underdog, and a mediocre team. And I had to really coach, you know what I mean? We didn’t have subs. At times, we had zero subs because of COVID and injuries. And other times, we had one or two. We really had to work some players around. And it’s definitely a coaching staff.

“There’s a head coach, but then you have ... I feel like I have the best coaching staff that I’ve ever had, where we had it last year and going into this year. It makes coaching really fun when you have a good group.”

Perhaps one of the more shrewd moves from Traylor came in a personnel change, when she moved her leading goal scorer from 2019 in Hollis Bourque to defense, and allowed senior Angela Gierhart and sophomore Kyra Jones take more control of the offense.

“Sometimes you need to score goals,” Traylor noted. “But sometimes, you need to really prevent goals from being scored, too. There was that balance.

“But it was a lot of fun. I kind of really enjoyed being the underdog, because the pressure is not there. And when you do things you’re not supposed to (like make it to a regional championship), it’s that much more exciting.”