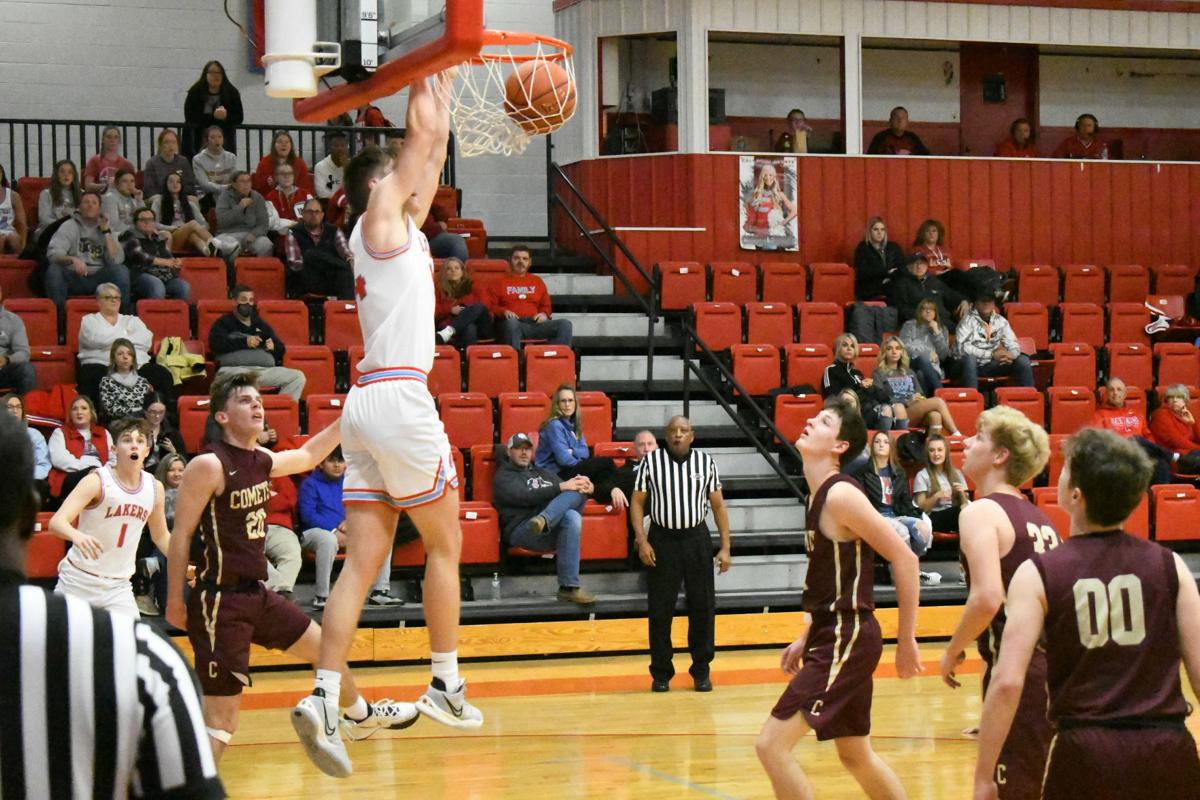 Matthew Ray slams it down as part of his double-double performance (11 points, 20 rebounds) in Calloway County’s 54-51 win over Carlisle County on Monday, Jan. 3. 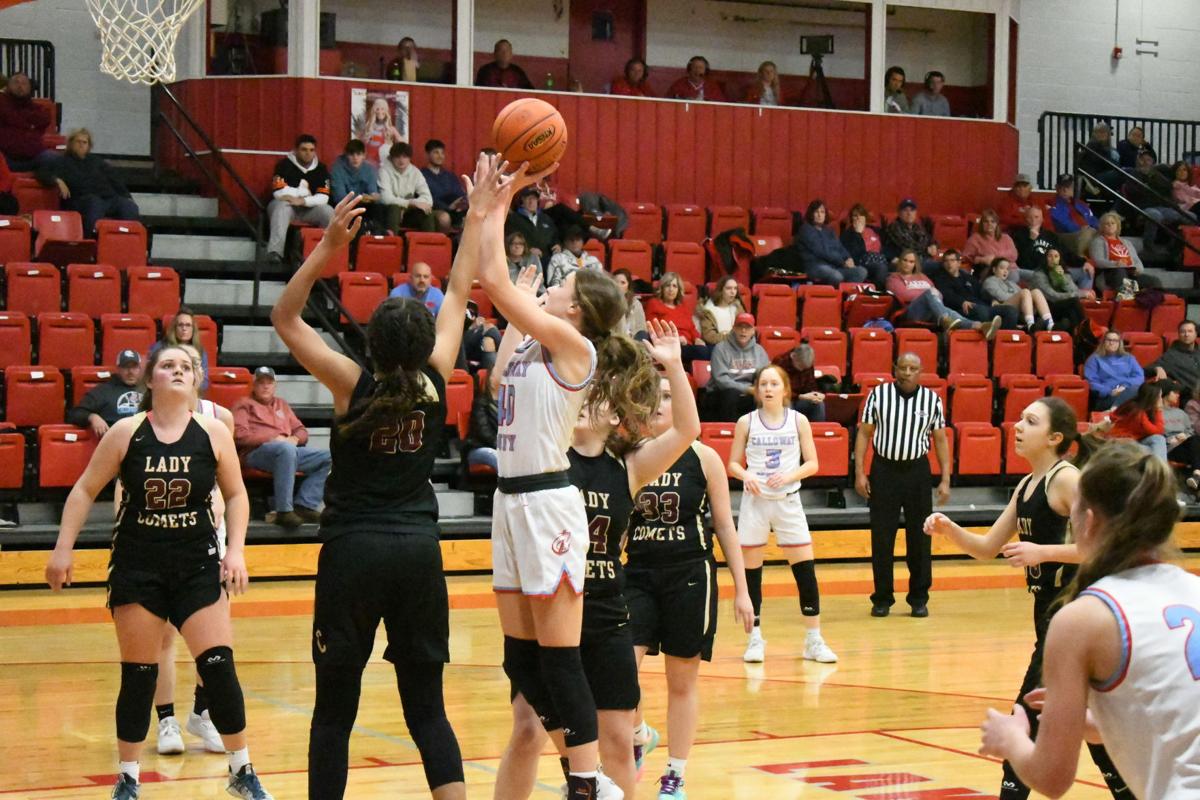 Calloway County’s Sayler Lowe takes the shot over the Carlisle County defense in her 26-point performance in the Lady Lakers’ 58-31 win over the Lady Comets.

Matthew Ray slams it down as part of his double-double performance (11 points, 20 rebounds) in Calloway County’s 54-51 win over Carlisle County on Monday, Jan. 3.

Calloway County’s Sayler Lowe takes the shot over the Carlisle County defense in her 26-point performance in the Lady Lakers’ 58-31 win over the Lady Comets.

After a slow start and physical second half, the Calloway County Lakers pulled off a 54-51 win over visiting Carlisle County Comets on Monday, for the first game of the New Year. From halftime on, it was a neck-and-neck battle for the lead with multiple lead changes, but a strong performance from freshman Eli Finley would seal the deal.

“This was a tough, great win for us,” Calloway County head coach Brad Cleaver said. “I was really proud of our guys, we were resilient, we dug in and made some tough defensive plays and got some great rebounds.”

An 8-0 run midway through the second quarter for the Lakers would be what made the difference in tying up the game at 19 points going into halftime. It might have been the momentum builder to surge the home team through the second half and on to victory.

Finley led his team with 27 points, 10 coming from the charity stripe, while Matthew Ray had himself a double-double with 11 points and 20 rebounds.

“The poise that I thought Eli Finley had as a freshman, he was 4-for-4 from the field and the free throw line in the fourth quarter, as a freshman that is pretty solid,” Cleaver said.

It wasn’t until the second half of play that Finley came alive. He put up nine points in the quarter and finished off the night with 14 in the final frame, where he made all four of his free throws.

On the Carlisle County side of things Hayden had another impressive night, knocking down 34 points to lead all scorers to be one of just four Comets to put points on the board.

The intensity level grew between the two teams as the clock wound down and it was still anybody’s game. With just 12 seconds remaining, the Comets found themselves down by four points, but a dagger from the corner by Zach Grogan would make it a one-point game. It would be a battle from the free throw line the rest of the way to seal the deal as the Comets would miss the buzzer-beating three pointer to send it to overtime.

Calloway County improves to a record of 8-6 and will play in the Kentucky 2A Championship Sectional Tournament next while Carlisle County takes their third loss, 8-3 and will play host to Fulton County on Jan. 7.

The Lady Lakers completed the sweep of Carlisle County when they came out with the 58-31 win over the Lady Comets after the boys game, to start 2022 on a high note.

It was again Carlisle County who had the advantage the majority of the first quarter as Kierra Whitaker had 11 of the 14 first quarter points for the Lady Comets. Whitaker would lead her team with 18 points. Calloway stayed resilient though, never letting their opponent out of their sight, only ever trailing by as much as six points in the opening quarter.

After the first eight minutes of play, the Lady Comets led by only four points, 14-10 and a slow second quarter by both teams brought the halftime score to just 20-16 in favor of the visitors.

A 14-point third quarter by eighth grader Sayler Lowe would be just who the Lady Lakers needed to take control of the game and run with it. Lowe finished the night leading all scorers with 26 points. The defense would also ramp up in the second half as the home team kept their opponents to just five points in the third quarter and six in the closing eight minutes.

Freshman Madison Futrell would take over in the fourth quarter for the Lady Lakers with 12 points, including six from the perimeter to help seal the deal. Calloway County improves to 5-6 while Carlisle County holds a 7-4 record.

Up next for the Lady Lakers the Kentucky 2A Championship Sectional Tournament while Carlisle County hosts Livingston Central on Tuesday, Jan. 4.