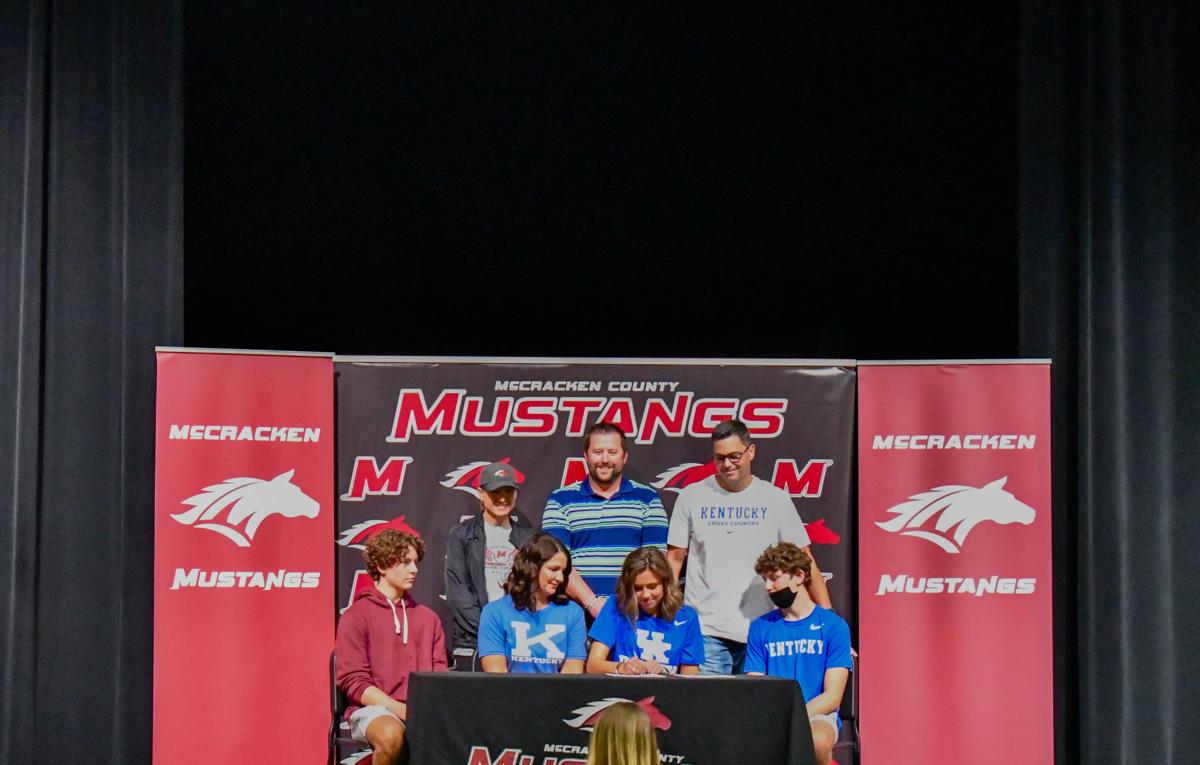 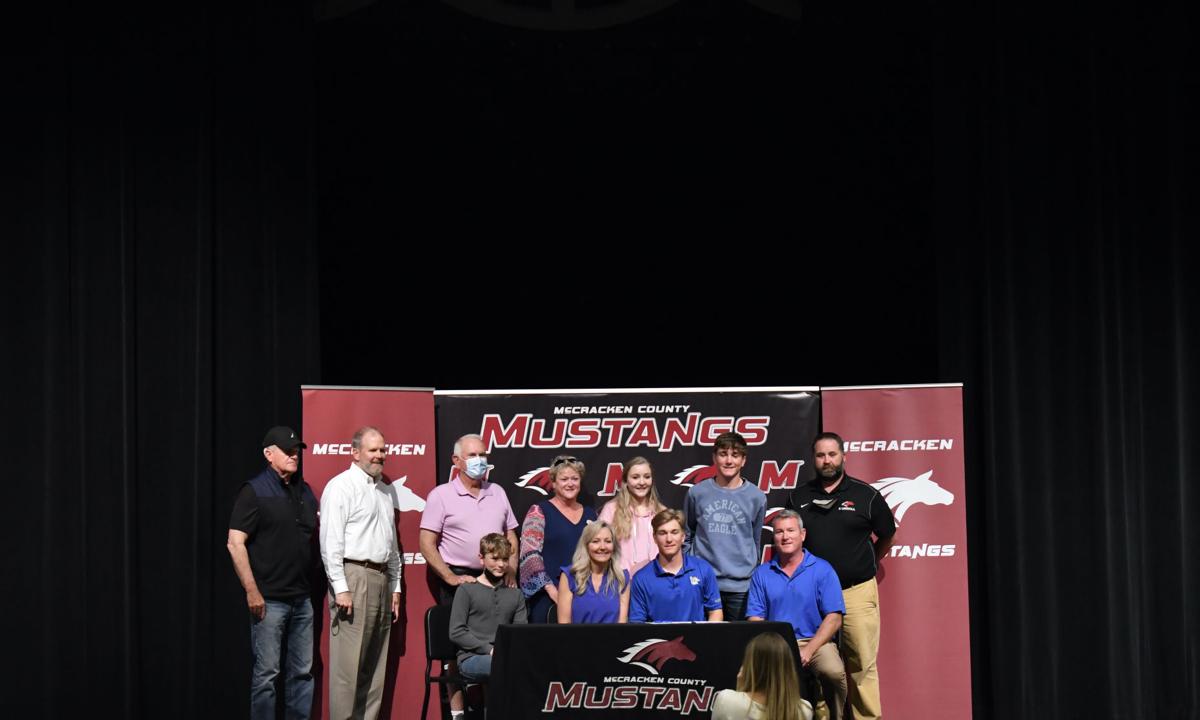 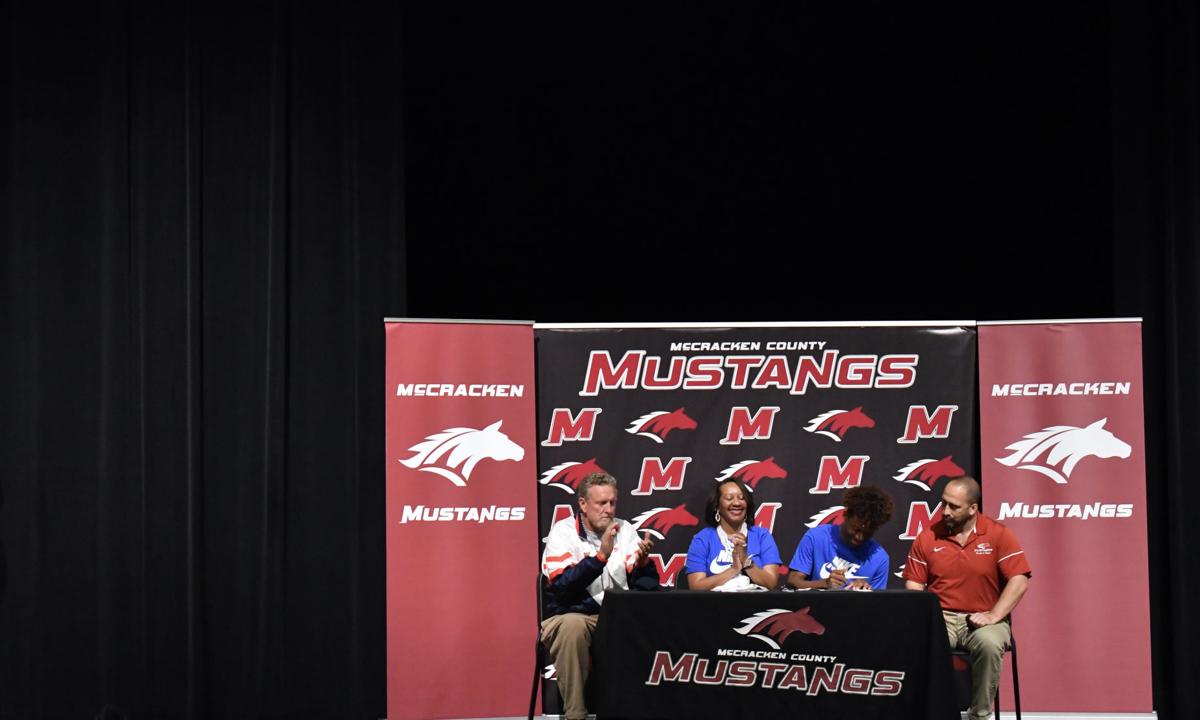 Senior Donsten Brown signs with the University of Kentucky for track and field on Tuesday afternoon at McCracken County High School. 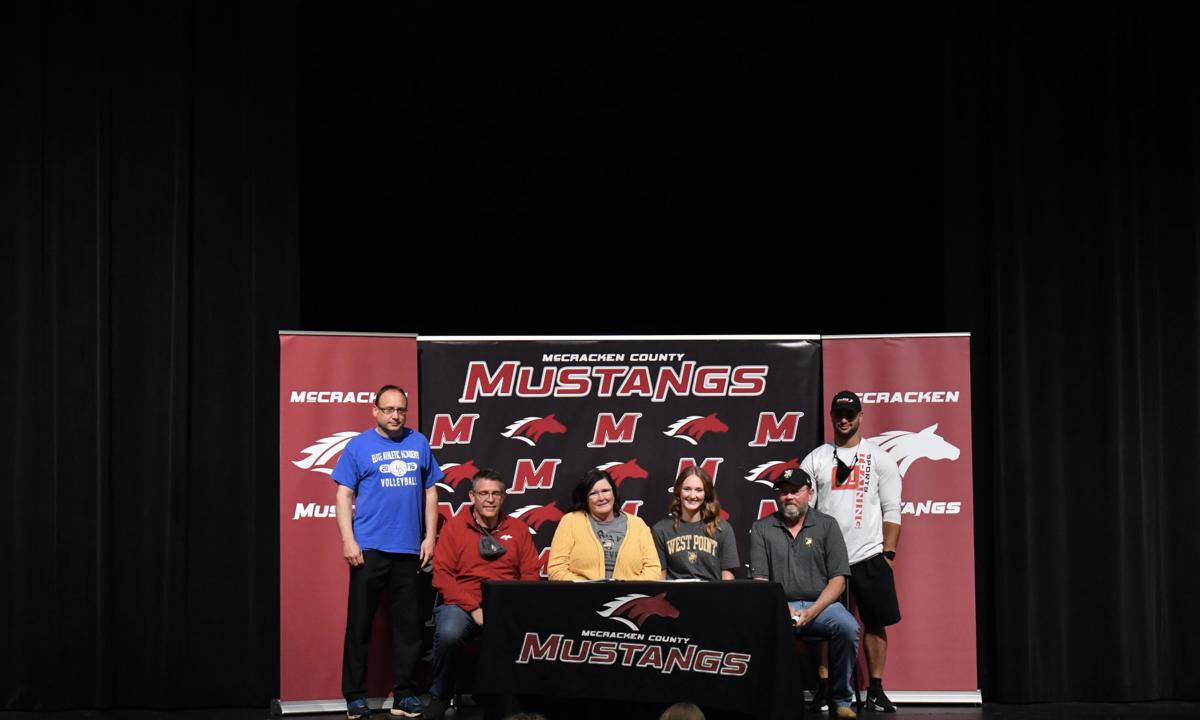 Senior Donsten Brown signs with the University of Kentucky for track and field on Tuesday afternoon at McCracken County High School.

On Tuesday afternoon, McCracken County High School’s athletic department celebrated 18 seniors who will be continuing their athletic careers next year in college.

The ceremony kicked off with McCracken Athletic Director Geno Miller speaking. Miller spoke about the amount of personal sacrifice and dedication each student-athlete has gone through during their time participating in McCracken’s athletics.

With baseball season in full swing, Zach Hobbs’ group was recognized first before heading to practice. Brandon Dodd, Austin Harper, Ben Higdon, Josh Tucker and Braden Vinyard were each greeted by Hobbs before signing with family and friends surrounding them.

Dodd will be attending Dyersburg State in the fall and continuing his baseball career. During his time at McCracken, he lettered all four years in baseball and was the 2018 MCHS Varsity Baseball Rookie of the Year. He was a member of the 2019 KHSAA state runner-up team, the KHSAA state semifinalist team, a member of the KHSAA Academic All-State Team and was included in the 2020 Perfect Game WWBA All-Tournament Team.

Harper will be attending Berea College to continue playing baseball. He was recruited by five different schools and has been a member of the baseball team for four years. Harper boasts a 3.6 GPA and is an honors graduate.

Higdon will head to the University of Memphis to continue his career. The four-year varsity baseball player is currently No. 4 in the KHSAA’s Top 25 hit leaders with 31 and counting. He is also ranked No. 17 in KHSAA’s Top 25 batting averages (.525) and No. 9 in doubles with nine. Higdon is an honors student, a member of FCA and was selected for homecoming court. When Higdon is not on the baseball field, he is the Stang Gang Pep Club Leader.

Tucker is continuing his career at Kentucky Wesleyan College. He is the Paducah Chamber of Commerce Youth Lead Class No. 9 graduate, a Rotary Club of Paducah Junior Rotarian and an honor graduate. He is also First Team Academic All-State and will be attending Kentucky Wesleyan on an athletic and academic scholarship. The senior currently sits with an ERA of 0.67 with 22 strikeouts in 21 innings pitched.

Vinyard will attend Volunteer State College in the fall. He is a four-year varsity baseball player, four-year Academic All-State and two-year regional champion. The senior is also a member of FCA and the Pep Club and was a part of the 2019 state runner-up team.

Once the members of the baseball team were dismissed, Miller continued with recognizing the remaining McCracken signees.

Aydt, who has been a solid figure in McCracken’s track and field program, will attend the University of Kentucky this fall. She is the three-time Region 1 3A cross country champion, three-time Region 1 Runner of the Year, five-time KHSAA Academic All-State First Team for cross county and two-time MCHS Most Valuable Runner Award recipient. Aydt was also named the Heisman Award state winner.

Bohde will continue his soccer career at Spalding University. Bohde is a two-time Academic All-State member, four-time district champion, 2020 region champion, a member of the 2020 All-District Team and 2020 All-Region First Team. He also participated in the KHSAA Sweet 16.

Brown will continue with track and field at the University of Kentucky. He is a two-time KHSAA Class 3A state qualifier in high jump, a two-time member of the All-Area 1 First Team, 2019 Region 1 Class 3A champion and came in third place during the 2019 AAU Junior Olympics. He was named 2019 and 2020 MCHS Track and Field Male Athlete of the Year. The senior track star was the 2020 SEAAU Track and Field Indoor Invitational champion and the 2021 Paducah Tilghman Track Invitational Augie Schiller Male Field Athlete of the Meet.

The senior is a three-year member of the district champion and state playoff teams. He made the All-Western Kentucky Regional Teams as a senior safety.

McCune led the football team in interceptions and was third in total tackles in his senior season.

McCune was on the All-District and All-Region teams in 2020 and 2021. He was the recipient of the Joey Fosko MVP Award during the 2021 regional tournament. The basketball star plans to major in sports management and communications and received the maximum merit and business scholarships to attend Mount Saint Joseph University this fall.

Patrick will continue his career in cheer at Austin Peay. The senior was named for the Kentucky Athletic Association Academic All-State teams in 2018-19 and 2019-20. He was a member of the KMEA First District All-District while at Paducah Tilghman. He has received the DAR Youth Citizenship Award and Band Distinguished Award in Solo and Ensemble.

He was a member of the first-place Kentucky State Coed Cheer Championship and the UCA virtual Coed National Championships.

Patrick was selected to attend the NYLP in Advanced Health Care and Medicine and as a Mayoral Intern under Mayor Brandi Harless. He was also a Paducah Bank Teen Ambassador and on the alumni board.

Puryear will attend Indiana Tech and continue her career in tennis. She was a member of the 2016 and 2017 state championship tennis teams. The senior was also a part of the 2018 state runner-up team. She was runner-up in doubles in 2017 and was a quarterfinalist in the state doubles in 2018 and 2019.

The senior was named valedictorian for the graduating class of 2021. She has been an academic scholar from 2016 to the present day. She is a member of the National Honors Society, Rotary Club and Beta Club.

Rikel will head to John A. Logan in the fall and continue his career in golf. He was a member of the KHSAA First Team Academic All-State during all four years of high school. He began playing on the golf team during seventh grade and has lettered all six years.

Shell will continue her soccer career at Wabash Valley College. She was a member of the district team that won four years in a row. She was also a member of the regional runner-up team in 2019. Shell lettered in varsity soccer in her sophomore, junior and senior years. She received a full-ride scholarship to Wabash Valley and will graduate with All Honors.

Trueblood will continue his football career at Campbellsville University. He was the recipient of the 2018 McCracken County Football Coaches Award. He came in second place during the 2019 Border Brawl Powerlifting Meet for the 250-pound weight class and was a state qualifier.

He was named the football team’s Iron Horseman of the Year in 2019 and 2020. He was also a state qualifier for powerlifting in the heavyweight division in the spring of 2020. Trueblood was named for All WKC Football in 2020.

Vlach will attend Massachusetts Maritime Academy and continue his football career. He is a three-year varsity letterman and the four-year recipient of the Coaches Choice Award and was named Freshman Defensive Player of the Year.

Vlach was an honorable mention for the 2018-2020 KHSAA Academic All-State.