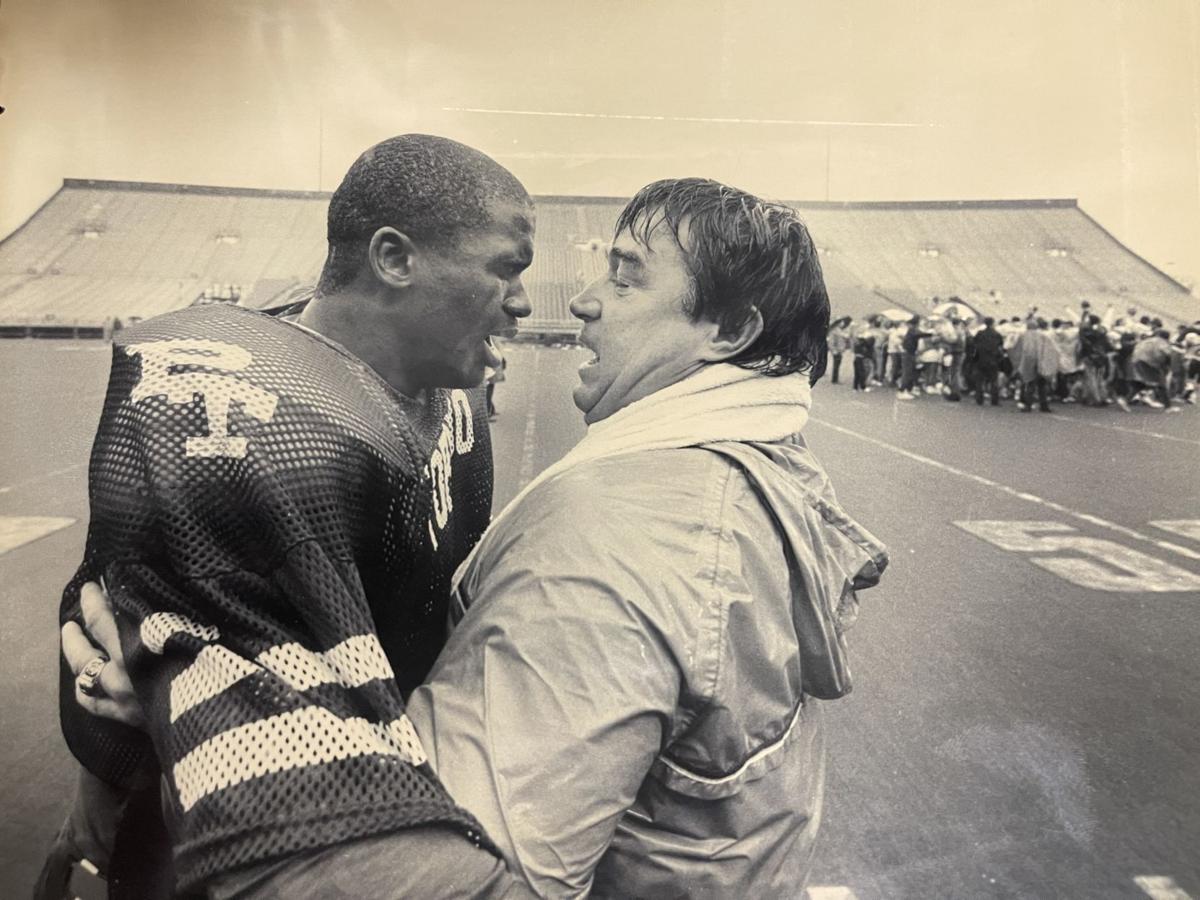 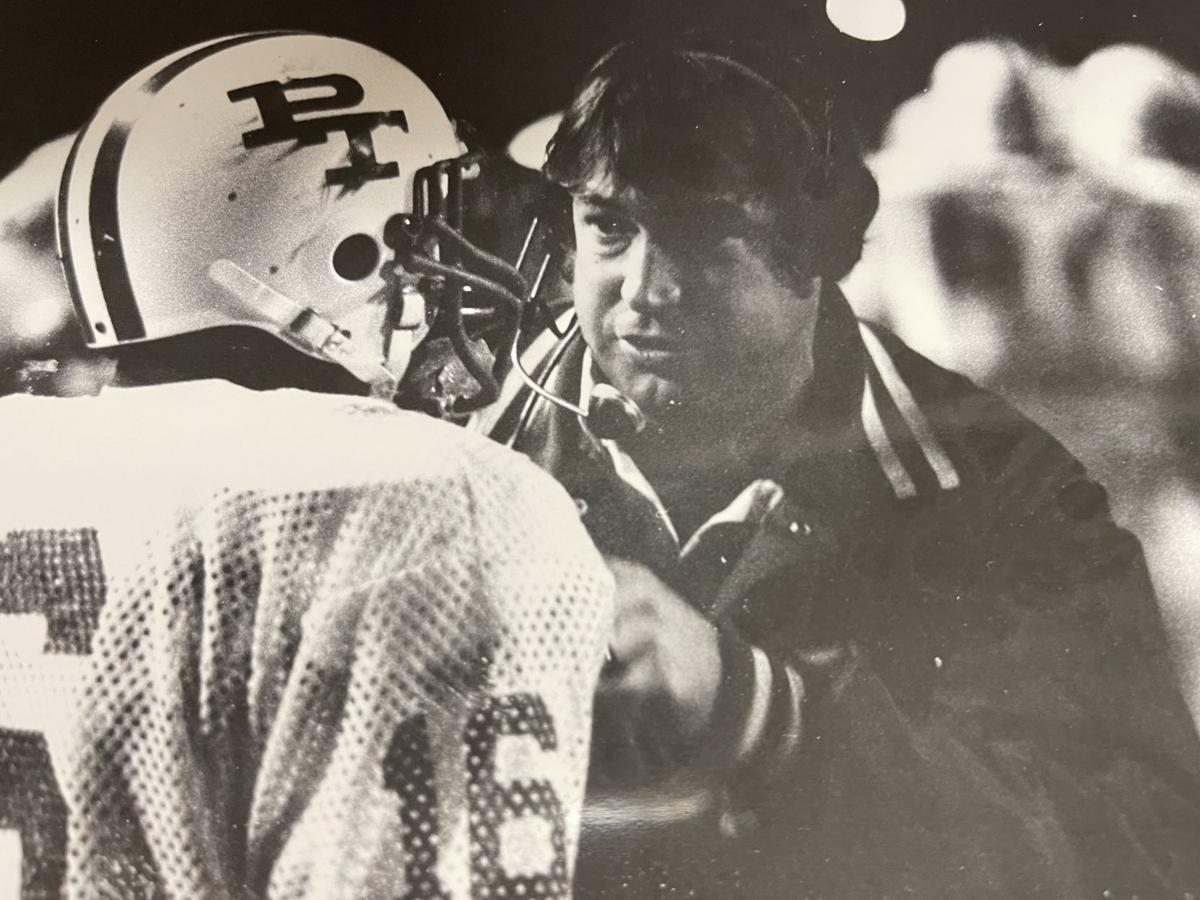 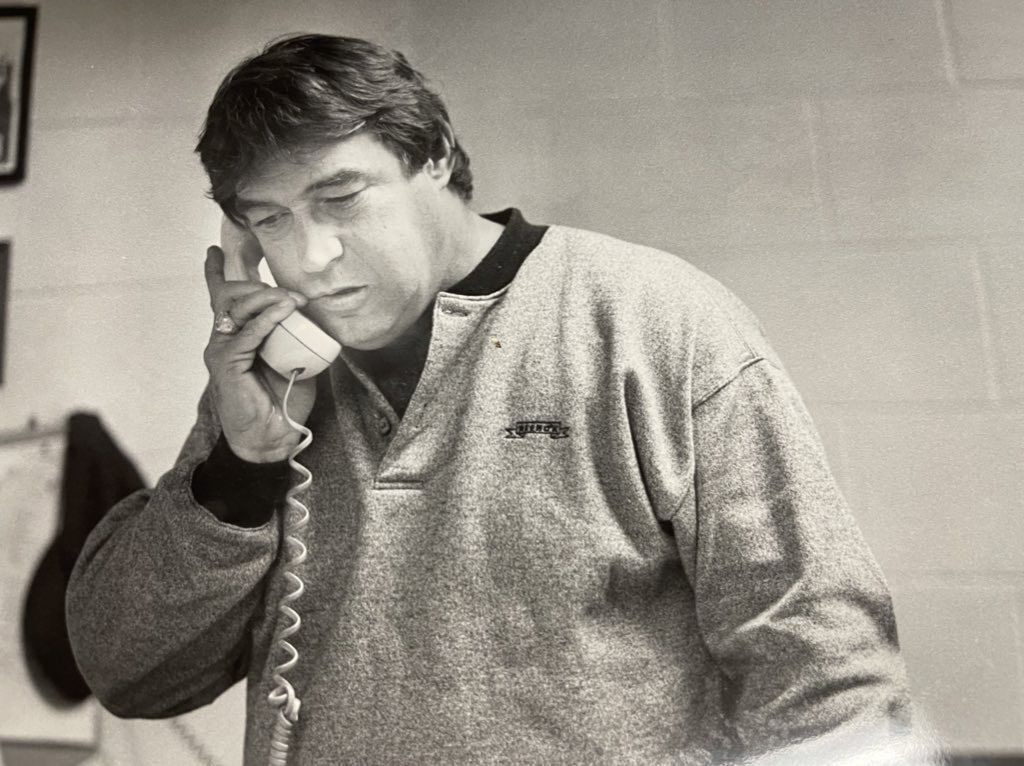 Allan Cox on the phone at Paducah Tilghman High School in the mid-1980s. Cox served as head football coach at PTHS from 1983-93. He spent 21 years with the Blue Tornado football program.

Allan Cox on the phone at Paducah Tilghman High School in the mid-1980s. Cox served as head football coach at PTHS from 1983-93. He spent 21 years with the Blue Tornado football program.

Former Paducah Tilghman High School head football coach Allan Cox left behind something extraordinary, a gift that will keep his name alive for years to come.

While many have cause to believe it came in football, the gift came in his acts of kindness, passion, and grit for life. Allan Cox was not a soft man. Instead, he was loud and boisterous, making him the man many former players and staff loved dearly.

He was best known for his 21 years with Paducah Tilghman’s football program, from 1973 to 1993. Under his guidance, the Blue Tornado collected 106 wins in 11 years, including five state championship game appearances, winning it all in 1985.

“He meant everything to me. He was part of what I call a village in terms of helping raise me along with my mom and dad,” Paducah Tilghman track and football coach Randy Wyatt told The Sun. “Having a coach like himself, Coach (Lyman) Brown and Coach (Cecil) Ward teaching us and using those tools in the sport they were coaching to help build better men and women means the world to me.”

Wyatt played for Cox at Paducah Tilghman each fall from 1986-1989, later taking on the role of head coach for the Blue Tornado football program as an adult. Like his predecessor and coach, he led Paducah Tilghman to a state title in 2009.

“It’s a tough loss, and I struggled with it,” Wyatt said. “Watched the interview several times, and I cried. Death hits you at different times, and when I first heard about it, I was kind of numb to it, then after that, the next day, it was very emotional for me.”

Wyatt recalled a moment that he will never forget from the 1988 state football finals. The Blue Tornado fell in overtime to Covington Catholic, 30-24. The team’s loss kept him awake at night for years. But, in his eyes, he told The Sun the state win in 2009 was dedicated to his ’88 teammates and Coach Cox.

“Not only did he touch my life, but he also touched so many other athletes’ lives throughout his years as a coach,” Wyatt said. “He was everything a man is supposed to be.”

In an article from The Sun written by Ward Willingham on Dec. 4, 1988, Willingham recalled the 1988 loss.

“The warmth and light the sun splashed on the celebrating Covington Catholic fans above couldn’t penetrate the space where Tilghman coach Allan Cox was telling his players of his pride in their efforts and achievements,” Willingham wrote.

While Cox was often fiery on the sidelines during game time and at practice, his devotion and realness to the young men he coached did not go unnoticed by fans, media and the players themselves.

“He gave me the courage to never to give up,” former PTHS football player Dee Smith said. “Don’t give up because he didn’t give up even for a second. Life might get you down, but sports can take you a long way. Coach Cox was real. He never sugarcoated anything.”

A football coach for 44 years, now retired, Larry Shanks knew Cox before he became a Paducah Tilghman legend. The two began a friendship at UT Martin, playing as teammates on the football field, and that bond lasted until Cox’s final day.

“Coach Cox and I have known each other since 1964, we both played football at UT Martin, and I was a year ahead of him,” Shanks said. “We played on the Tangerine Bowl team at UT Martin, and after he finished with football, he went to Vietnam. Once Coach got back from Vietnam, we stayed in touch with each other, talking on the phone every week. He was like a brother to me. We have always been like that.”

Cox suggested that Shanks serve as the defensive coordinator for Paducah Tilghman in the late 2000s under Wyatt. Shanks had previously coached at UT Martin, Graves County, Union City, and Fulton City before moving to the Blue Tornado.

“At the time he was in Vietnam, he was 22 years old when he started. He was the youngest guy in the platoon, and they fought in some of the worst battles there was,” Shanks said. “But he never lost a man, every one of them came back home. And that is a tribute to the type of man he was.”

His acts of heroism as an infantry platoon leader with the 101st Airborne Division earned him a bronze star, bringing his men back home safely. But, like Shanks said, getting all his men home from war was a prime example of the type of person Allan Cox was even from an early age.

“We all came from different schools for that first year of high school, and he was able to make that link between a lot of guys that didn’t know each other,” former PTHS football player Shawn Holmes said. “Some of us knew each other but had never played together.”

Cox was a man who did not judge someone by their demographic, his players said. If a young man played under Cox, he treated them fairly from when the player made the roster until his last days.

“Coach Cox was like a father figure to a lot of us,” Holmes said. “A lot of guys didn’t have a father, and Coach Cox cared. It was deeper than football for all of us. What Coach Cox instilled in us is still with us. He taught us to have strong work habits, and we are all thankful for that.”