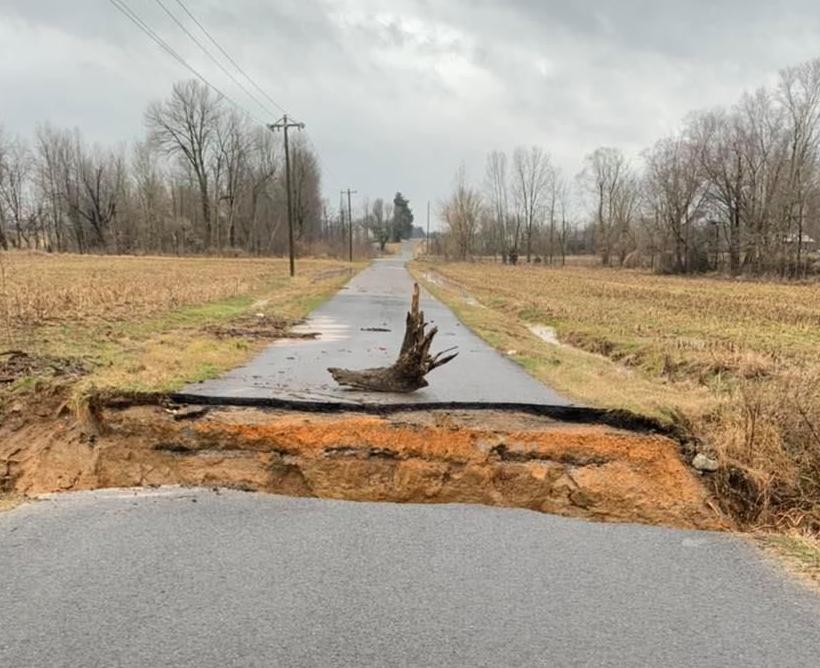 Pictured is a washed-out section of Wingo Road from this weekend’s storms and floods. 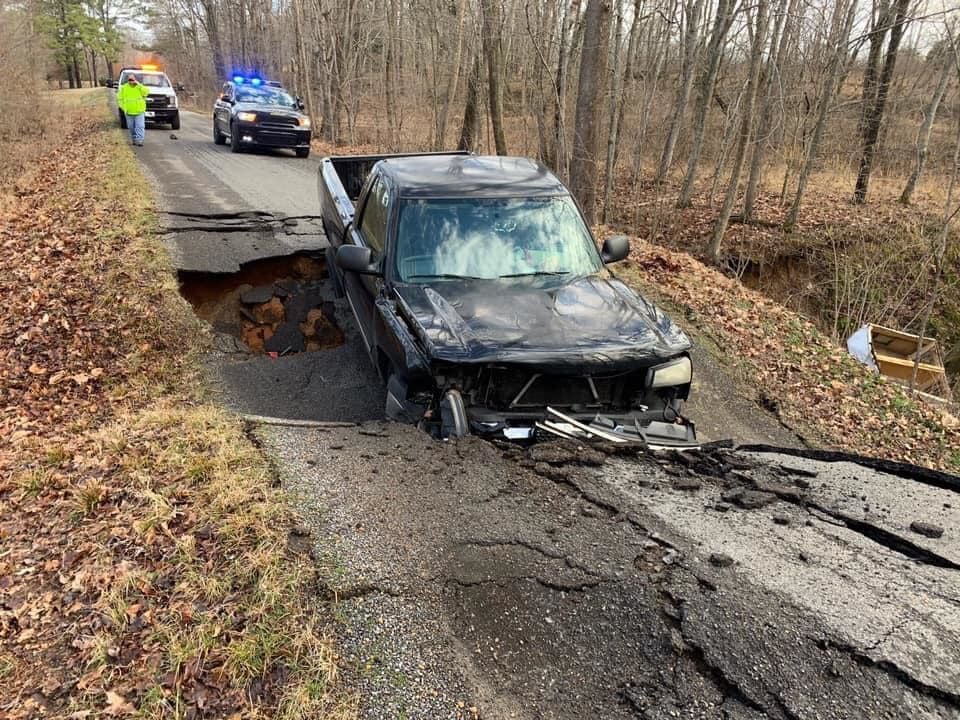 A truck driven by Brett Crawford of Clinton smashed into the section of Knob Creek Road Monday following weekend heavy rains. Crawford was injured in the wreck.

Debris from a destroyed chicken barn along Ky. 129 from January 2020 hangs in the trees and almost appears to be suspended in midair following an EF-1 tornado.

Pictured is a washed-out section of Wingo Road from this weekend’s storms and floods.

A truck driven by Brett Crawford of Clinton smashed into the section of Knob Creek Road Monday following weekend heavy rains. Crawford was injured in the wreck.

Debris from a destroyed chicken barn along Ky. 129 from January 2020 hangs in the trees and almost appears to be suspended in midair following an EF-1 tornado.

MAYFIELD — The old adage about Kentucky weather is that if you don’t like it, wait a few minutes. The past few weeks have been prime examples with snowstorms, spring-like temperatures and flooding.

Across-the-board meteorological patterns underscore the need for people to be prepared for any sort of weather. This week, through March 7, also happens to be Severe Weather Preparedness Week with organizations such as NOAA and Graves County Emergency Management helping spread the word about being prepared for anything.

“We’re trying to, on social media, put stuff out there about tornadoes, make sure people have ways to get information as far as the weather,” said Graves County Emergency Management Director Tracy Warner. “Two weeks ago, we had freezing temperatures and not it’s in the 50s. It’s very weird. We get a little bit of everything.”

Over the weekend, between 3-6 inches of rain fell on areas of the Jackson Purchase. Murray and parts of neighboring Calloway County were hit hardest, prompting Gov. Andy Beshear to survey the scene Tuesday. In Graves County, some roadways were damaged when culverts were washed away in the swift and powerful waters.

The Graves County Sheriff’s Office posted on its Facebook page a culvert being out and tearing apart a section of Wingo Road Sunday morning. The sheriff’s office also reported a Hickman County man was injured Monday when he drove into a washed out section of Knob Creek Road in southern Graves County.

Warner said several roads had to be closed during the weekend floods, but no homes had to be evacuated. She said one driver reported she couldn’t get to her home. By the time first responders arrived, Warner said, the water had receded enough where they escorted her home.

“Luckily, she didn’t go through it. Before we got there, it was probably flowing pretty rapidly,” Warner added. “I credit her. She turned around.”

Typically, the idea of severe weather centers around spring; however Warner said severe weather can literally strike any time of the year. In January 2019, straight line winds damaged homes, outbuildings and fencing near Symsonia. Later in June, a wind microburst blew out a side wall to a Hickory business. Then in January 2020, an EF-1 tornado was confirmed in south Graves County that damaged several buildings including a large poultry operation on Stubblefield Road.

Warner is also reminding county residents they may sign up for the Code Red emergency notification system that sends NWS alerts to a person’s cell phone. Registration is free and involves accessing the Graves County website (www.gravescountyky.com) and clicking on the Emergency Management tab under the County Government dropbox menu on the home page. Once on the Office of Emergency Management page, click on “Community Notification Enrollment” to begin the sign-up process.