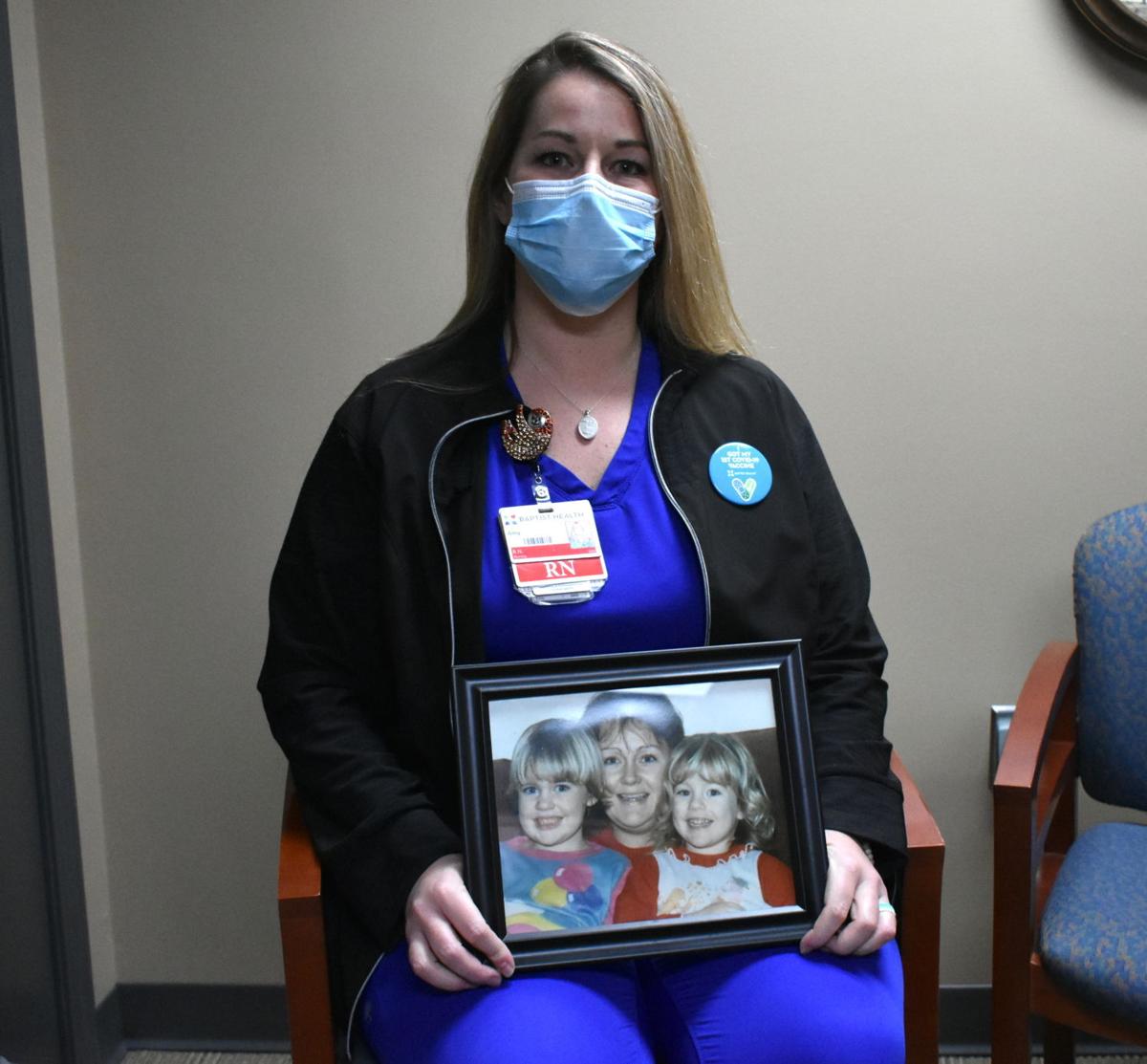 Marion resident Amy Byford, a registered nurse at Baptist Health Paducah, wears an “I got my 1st COVID-19 vaccine” pin and holds up a childhood family photo with her late mother, Linda McDowell.

Marion resident Amy Byford, a registered nurse at Baptist Health Paducah, wears an “I got my 1st COVID-19 vaccine” pin and holds up a childhood family photo with her late mother, Linda McDowell.

Like many daughters, Marion resident Amy Byford talked to her mother almost every day. She drives an hour-long commute to Baptist Health Paducah, where she’s a longtime nurse, and that’s what Byford would do on the way home.

“I talked to my mom about everything, before I talked to my husband or anything usually. I had to run it by my mom first,” she said.

Byford’s life has since changed forever, after she and her family lost its “glue,” Linda McDowell of Marion, to COVID-19 on Nov. 30. She was 70 years old. A retired teacher, McDowell had taught for more than 30 years in Crittenden County.

“Driving home now, I’ve even found myself picking up the phone,” she said.

“Just like, ‘What am I doing with this? There’s nobody to call.’ It’s been hard. She was just always there for me no matter what it was. Her family was her top priority. She took our needs over her own always, even when we begged her not to.”

Byford, who’s a registered nurse in outpatient surgery, explained that her mother had underlying health issues — diabetes and mild kidney problems. It didn’t hold her back and she was “very active.” She shared the news about testing positive on a Monday and, initially, didn’t have many symptoms.

“She might have been holding some of this back for me because she knew I would be like, ‘You need to go (seek treatment),’ ” Byford said.

“But she said she was kind of achy. A little bit of fever, not bad. She went and got tested. She was positive. By Wednesday, she’s having shortness of air, having trouble breathing.”

McDowell went to Baptist Health’s emergency room and got admitted to the COVID unit, having low oxygen saturation levels. In the hospital, a friend had helped set up a Zoom call for Byford and her sister.

“One of the worst things in my life will always be seeing her on the other side of the screen struggling to breathe and trying to talk and barely being able to talk to me,” she said. “And you can’t be with them. That was the hardest part. When I was sick, even as an adult, she was always there holding my hand. I couldn’t do any of that.”

She also praised the Baptist Health nurses on the unit as “amazing,” and explained they always took time to speak with her anytime she called.

“I’ve worked with some of those nurses for years and some of them I’ve never met before in my life, but they were all phenomenal and they took good care of her and they assured me that they were telling her when I called,” she said.

McDowell’s hospital treatment included 15 days on a ventilator, and there were “ups and downs,” but her condition declined to the point where she was taken off the ventilator on Nov. 30. She died a short while later, leaving the family shattered.

Naturally, her mother hasn’t been far from her heart and mind. That proved especially true when Byford got her first round of the Moderna COVID-19 vaccine on Jan. 2. She’s due for the vaccination’s second round on Jan. 30.

“It is absolutely surreal,” Byford said, on losing her mother.

“It doesn’t even seem real to me still half the time, but just the quickness of her getting it and us thinking it’s going to be OK and then, within that a couple of days, she’s in the hospital. And, a couple more days, she’s on the ventilator.”

A health care professional, Byford noted she would have gotten the vaccination anyway and she’s a “believer in science,” but it was an emotional moment to get that shot — just about a month after losing her mother to the virus’s effects.

“There’s going to be people that can’t take it just like with any kind of vaccine or medicine, and I hope enough people get it to where we give them that herd immunity that they need to protect them,” she said.