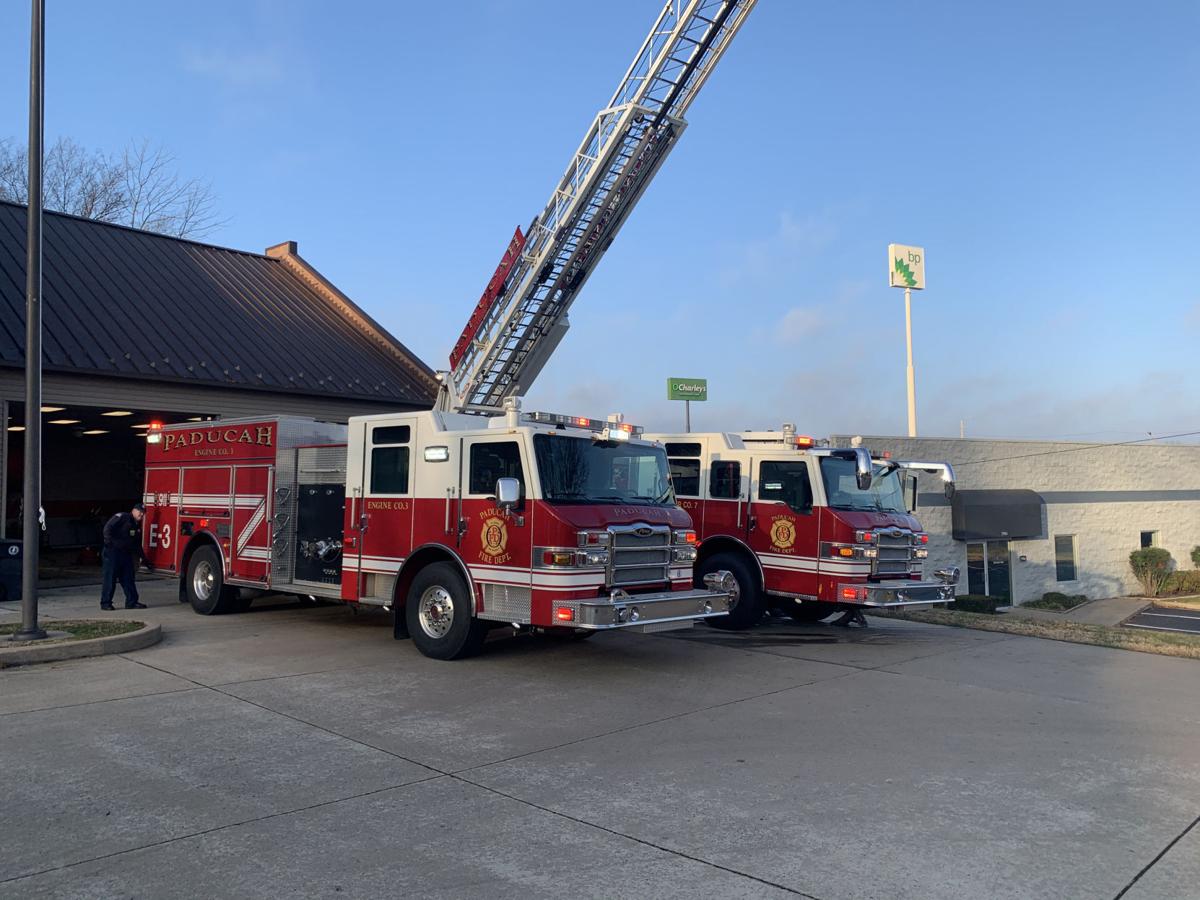 Capt. Nathan Torian, who serves as president of Paducah Professional Firefighters Local 168, has concerns about the department’s staffing level. He’s advocating for the city to develop a plan to add staffing within the fire department, citing a National Fire Protection Association recommendation. 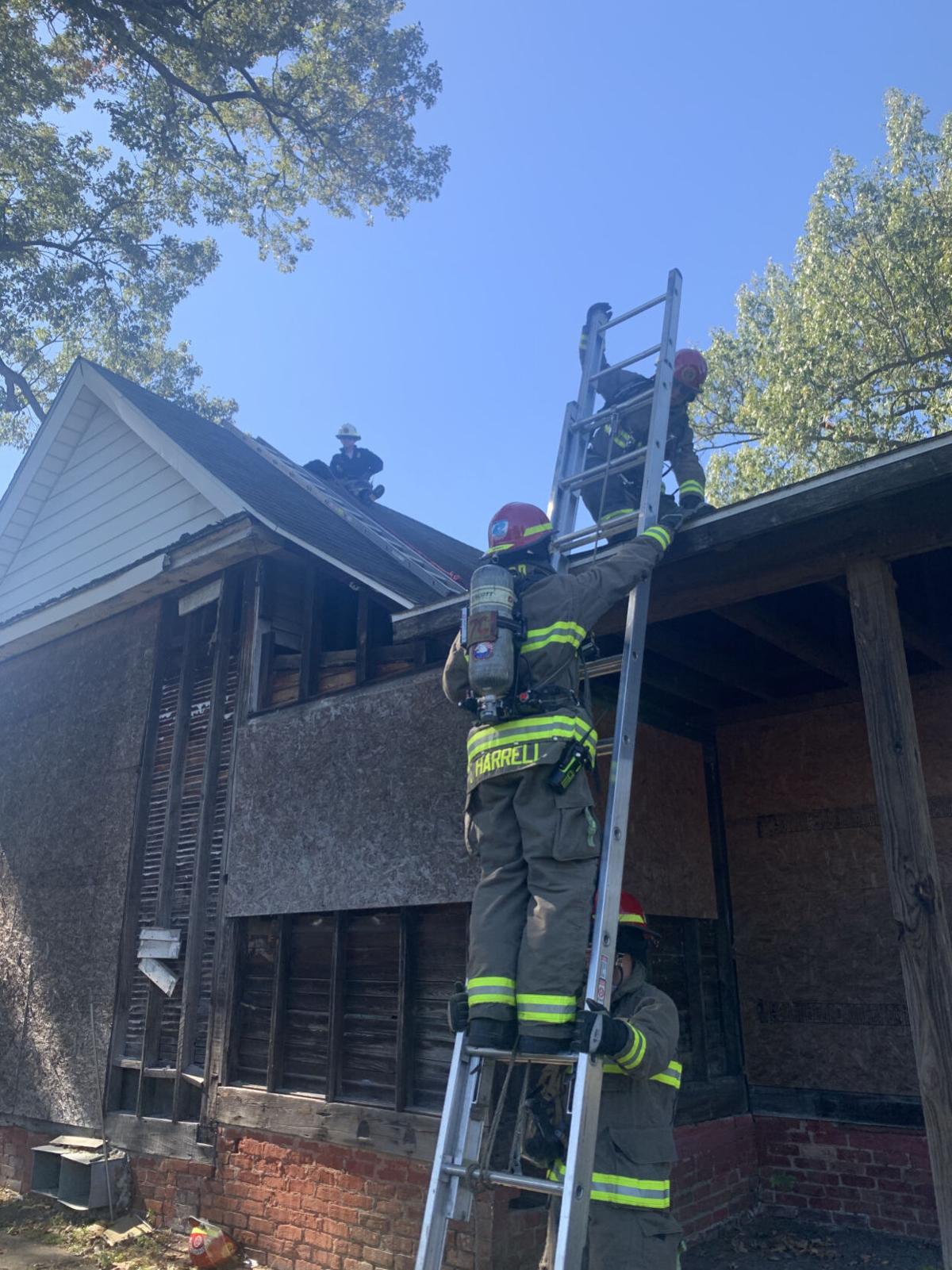 Fire personnel work together to climb onto the roof of a structure, in this undated photo provided by Paducah Fire Department Capt. Nathan Torian. He serves as president for Paducah Professional Firefighters Local 168 and has concerns for the department’s staffing level.

Capt. Nathan Torian, who serves as president of Paducah Professional Firefighters Local 168, has concerns about the department’s staffing level. He’s advocating for the city to develop a plan to add staffing within the fire department, citing a National Fire Protection Association recommendation.

Fire personnel work together to climb onto the roof of a structure, in this undated photo provided by Paducah Fire Department Capt. Nathan Torian. He serves as president for Paducah Professional Firefighters Local 168 and has concerns for the department’s staffing level.

Capt. Nathan Torian, who serves as president of Paducah Professional Firefighters Local 168, wants the city to develop a plan to increase staffing levels within the Paducah Fire Department.

The fire department currently operates with 58 firefighters, and has two vacancies because of retirement and resignation. According to officials, the fire department can hire a minimum of three people at once and plans to do that, after another vacancy arises.

“If we get another person that commits to retirement or puts their paperwork in, then we have been told we have the green light to hire,” Torian told The Sun. “That is a positive for us, but it still only takes us to the 60 people.”

The 60 personnel, Torian explained, would be below the National Fire Protection Association’s minimum recommendation of 69 firefighters.

“We do not have enough people on fire scenes to do the tasks that are needed to do on any given fire,” he said. “Right now, when we fight a structure fire here in town — if it goes on for so many minutes — we’re having to call in a minimum of eight people on overtime to come in and help staff the fireground.”

He thinks it poses a danger to firefighters and residents.

“Our response times are good when you have your first incoming engines, but we need more people and more apparatus (fire trucks) running at the scenes that we’re working,” he said.

“We’re not just doing structure fires. We’re doing hazmat calls. We’re doing high angle rescue. We’re doing water rescue and we’re doing it with the bare minimum and we can’t perform all these functions, all the time, like we need to, because we just don’t have the staffing.”

Regarding what’s next, Torian wants to speak at a city commission meeting and he would love for this to be a top priority for the city.

He also wants the city to apply for a federal “Staffing for Adequate Fire and Emergency Response” (SAFER) grant again this year, which could garner funding to hire additional firefighters. It applied unsuccessfully last year.

“Everyone knows that this is going to be a large endeavor and an expensive task.” Torian said. A 16-year department member, he also emphasized a need to rebuild a couple of fire stations, or potentially relocate them in the future, noting the city is “growing west” and there’s farther territory to cover.

“Just start developing a plan,” he continued. “Whether it be five years down the road, seven, 10, up to 15 years — when we’re starting to see our firehouses get replaced and manning start creeping up slowly, so where the city can afford it.”

Earlier this week, The Sun reached out to city officials about Torian’s concerns and the fire department’s staffing levels, including Paducah Fire Chief Steve Kyle and Paducah Mayor George Bray, who took office earlier this month.

“Certainly, there’s information out there that supports that 69 number for the jobs that need to be done on the fireground and the deployment of resources for the city,” Kyle said, about the NFPA recommendation.

“But we do the best with what we have and what the commission authorizes us to have and continue to try to pursue that number, as opportunities present themselves.”

He cited last year’s application for a SAFER grant as an example of working toward that number. It’s his hope that the fire department will be allowed to apply for the SAFER grant again this year.

“Our personnel give a 110% to provide the best services that they can for our citizens, our community — seven days a week, 365 days a year,” Kyle added.

In his response, Bray explained that he’s “fully cognizant” of the fact that fire and police protection are critical city services and it’s “job one.”

“I think that before we would add additional monies into a budget of any type that we would really need to understand the number of firefighters that ... really is required to get the work done,” he said.

Bray said he’s had conversations with Torian and understands his views and respect them, but there’s “a lot of uncertainty” around the budget with COVID-19 and the city will be “in COVID” for at least the first half of next fiscal year.

“I think myself and the new commission needs to review data on fire suppression in the United States, kind of what’s going on with fire departments in cities and towns that are of our size — with our demographics and our similarities,” he said. “I think to do all that is going to take some time.”

Bray also shared that he spent two hours this week with the fire chief looking at fire stations, and some of them need attention.

“We have deferred maintenance on some of our fire stations and that’s a can that we cannot keep kicking down the road, but we can’t do everything. We have to balance out our needs, as it relates to firefighter personnel versus firefighter infrastructure,” he said.

“And so, we just have to balance that in the long-run. But rest assured, from my perspective, the safety of our citizens is top priority. We just have to make the most efficient use of city funds that we possibly can.”

However, Bray added that he is willing to have a conversation about long-term needs for firefighting, which include both personnel and facilities.

“The reality is that it’s going to take money for both and so, we just have to balance that discussion and we have to have data to support any decision we make.”

As for future plans, city officials will take part in an annual strategic planning retreat set for early February, at the convention center. It’s a chance for city leaders to discuss the strategic plan and hammer out priorities.