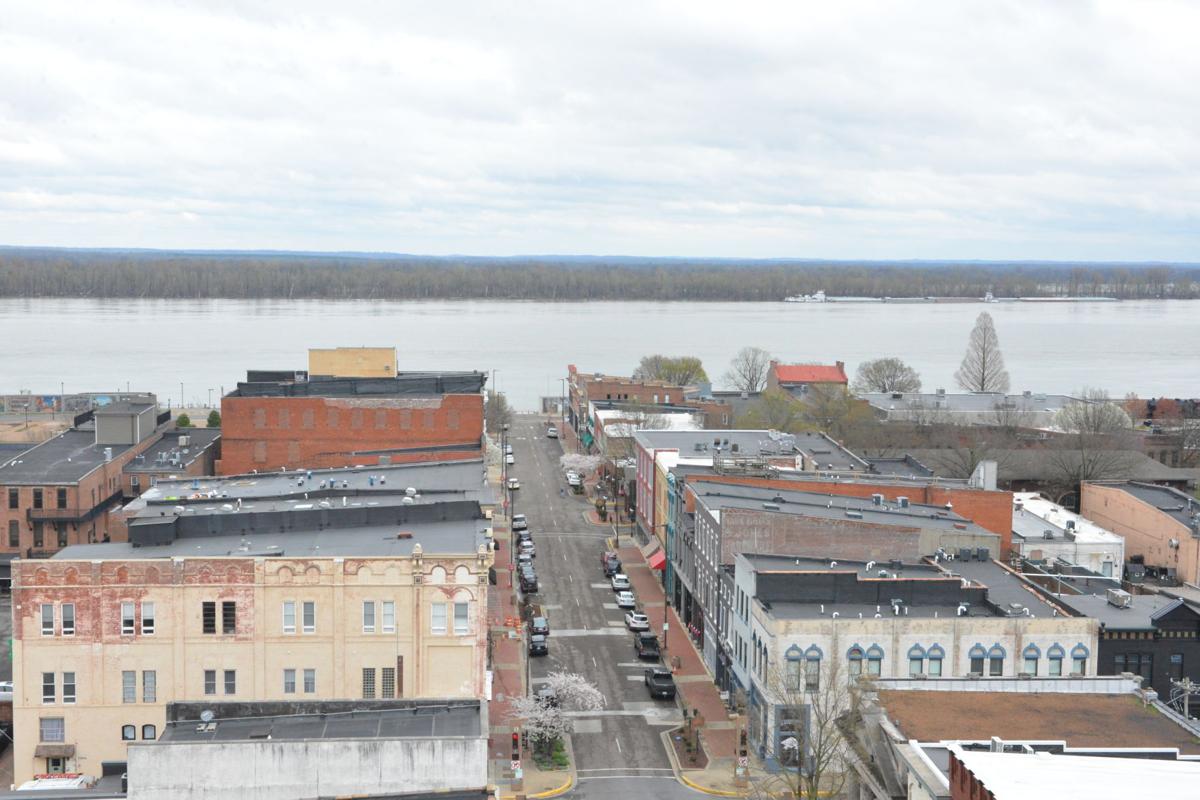 The Kentucky Economic Development Finance Authority gave final approval for Paducah’s Tax Increment Financing District, during its monthly meeting on Thursday. It authorized up to $21.4 million in tax increment financing. The district encompasses about 315 acres in Paducah’s downtown and riverfront area, which can be partially seen in this view of Broadway, taken from the U.S. Bank building. 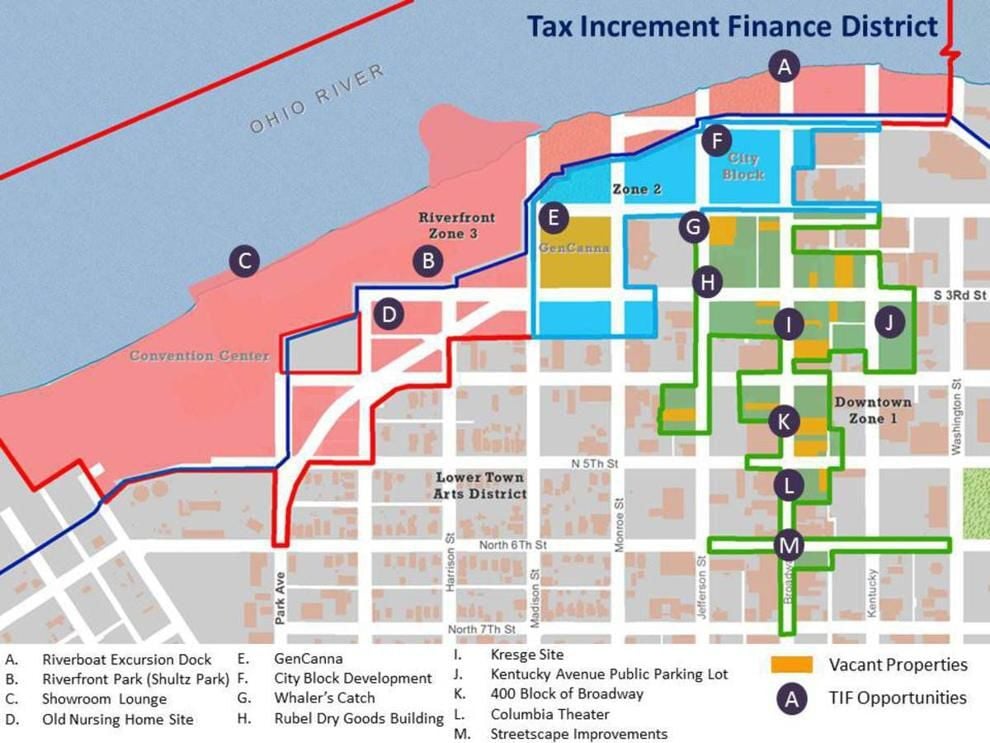 Paducah’s Tax Increment Financing district, a roughly 315-acre area in the downtown and riverfront area (depicted on map) received final approval from the state on Thursday. It received preliminary approval in August 2019.

The Kentucky Economic Development Finance Authority gave final approval for Paducah’s Tax Increment Financing District, during its monthly meeting on Thursday. It authorized up to $21.4 million in tax increment financing. The district encompasses about 315 acres in Paducah’s downtown and riverfront area, which can be partially seen in this view of Broadway, taken from the U.S. Bank building.

Paducah’s Tax Increment Financing district, a roughly 315-acre area in the downtown and riverfront area (depicted on map) received final approval from the state on Thursday. It received preliminary approval in August 2019.

Paducah received final approval on Thursday for the city’s first Tax Increment Financing District — a milestone moment that city officials herald as a way to spur more growth in the downtown and riverfront area.

The Kentucky Economic Development Finance Authority — which is responsible for awarding “most of the financial incentives offered” by the state’s Cabinet for Economic Development — met virtually Thursday morning for its monthly meeting, and gave final TIF approval, authorizing up to $21.4 million in tax increment financing for the city.

The city received preliminary TIF approval from KEDFA in August 2019. The TIF district’s goals are to revitalize the downtown area, capture state dollars, reinvest local dollars and help developers with public infrastructure costs, according to a city news release.

Paducah’s TIF district is about 315 acres in the downtown and riverfront area that’s ripe for various redevelopment projects, such as the approximately $21 million City Block project at Second and Broadway.

According to the city, tax increment financing is an “economic development tool” that allows local governments to capture future increases in property and other taxes generated by new development within an area. It’s “not a new tax,” but a way of using dollars that normally go toward the state, and reinvesting it within the TIF district through eligible infrastructure projects.

Bray described the TIF approval as a “culmination” of many people’s efforts.

“The last administration here certainly played an important role, but the efforts started a long time ago, and I think the TIF will become sort of a driver for a lot of our downtown growth,” he added.

Former mayor Brandi Harless told The Sun it “feels really great” to see the final approval accomplished. She thinks of a TIF district as one of the tools available to bring more funding to development in the city.

“When we started getting serious about the TIF and really pushing to get the approval, it was always with the idea that we needed to learn how to do a TIF district in Paducah, so we could replicate that in other places in the city,” she said.

“And so, I think hopefully, this is just the beginning of more TIF districts in our city to leverage those funds. Because the truth is we send those funds — our tax dollars to the state every year — and we don’t usually see them back in Paducah. And, with the TIF, we get to bring those dollars back home and spend them here locally.”

“I really love this idea of the baton pass in leadership, and we passed the baton and this commission took it forward,” she said. “I think we all have a lot to be proud of.”

“I appreciate the vision and commitment of the current and previous Board of Commissioners as we worked to launch the tax increment financing district,” Arndt said, in a news release.

“We are being fiscally responsible and creative by implementing a TIF since it creates a new revenue stream for the city by capturing state dollars with the goal of accelerating the revitalization of Paducah’s lovely downtown.”

Wilson, who’s been on the commission for the TIF planning, pre-approval and approval process, thanked KEDFA for its support and called Thursday an “exciting day” for the community.

“This is something that we’ve been working on and talking about for probably the last 10 years, and had started making steps moving forward on it,” she told The Sun.

“In 2018, we hired Commonwealth Economics to start evaluating whether or not we could qualify, and could apply. The TIF district is something that we know other communities have used to help spur growth in certain areas of their community.”

Both Wilson and Bray think the $21.4 million amount is “fair.” As an example, Owensboro (which has more than one TIF district) was authorized $24.5 million over 20 years for its downtown TIF in 2016, according to state documents.

“There are new TIF rules in place out there that I think made it challenging for us to understand fully — those TIF rules and the way the TIF was going to be calculated, but at the end of the day, we were successful in gaining a $21 million dollar TIF,” Bray said.

“I feel like that’s a fair amount and I think it’s enough for us to stimulate development in the TIF district. I’m excited. I’m excited about the opportunity of moving forward.”

“It has been a long time coming,” she said.

“It is a transformative project for Paducah, and it brings much needed new revenue to do infrastructure projects in our downtown, in our riverfront, and really kind of pushes us forward for implementing transformation and revitalization in downtown.”

In regard to the amount, Axt noted the city applied for $56 million worth of infrastructure projects, when it applied to the state.

“We knew going in that the state would award a portion of it, and I think we’re really pleased with the amount of the award that was given to us,” she said. “We can do a lot with the $21.4 million that the state has allocated.”

Axt gave several examples of infrastructure projects eligible for TIF revenues, which include the City Block project’s town square space — in terms of “much needed repairs and upgrades” to the existing parking lot — and other things, such as lighting, wayfinding, utility connections, remediation of historic buildings and shoreline enhancements.

What’s next for the TIF district?

“If a private property owner is redeveloping a ground floor space and opening a new business, that counts,” she said. “If a developer is creating apartments on our second and third stories of our historic buildings, that counts.

“New infill development — that’s City Block, that could be the Kresge lot, that could be Showroom Lounge — all of those projects count, and then also, BUILD and our riverfront park, all go towards that $150 million dollars of investment, which is the value of the entire TIF project.”

She also estimated there was about $6 million to $7 million of private investment, including real estate transactions and redevelopment projects, in 2020, and there are new projects that have opened or are opening this year, such as the Over/Under restaurant and sports bar on Broadway.

As for the City Block project, the previous city commission approved a development agreement last year with Louisville-based developer Weyland Ventures. It’s on track to break ground this fall, as Axt indicated to KEDFA.

It’s a private investment by Weyland Ventures and features development of a boutique hotel, parking, open space, and mixed-use buildings on the lot.

“Weyland Ventures is very excited about KEDFA’s approval of the TIF for Paducah. It has been a long process, but it is a significant accomplishment for the entire Paducah community,” Chief Strategy Officer Bill Weyland said, in a news release.

“Our company has valued its relationship with the city of Paducah, and we are looking forward to the next steps in implementing the TIF, breaking ground on City Block, and looking ahead to more redevelopment projects in the city.”

Bray also gave an update on the project’s status.

“They are continuing to work through the design of that, and certainly trying to make sure that whatever they design fits within the scope of what we want, and the budget that we’re willing to commit to certain elements of that project,” he said.

“So, I think we have ongoing discussions with them. I think that’s the next step with that project, but there are other projects going on in downtown. I think it’s exciting.”