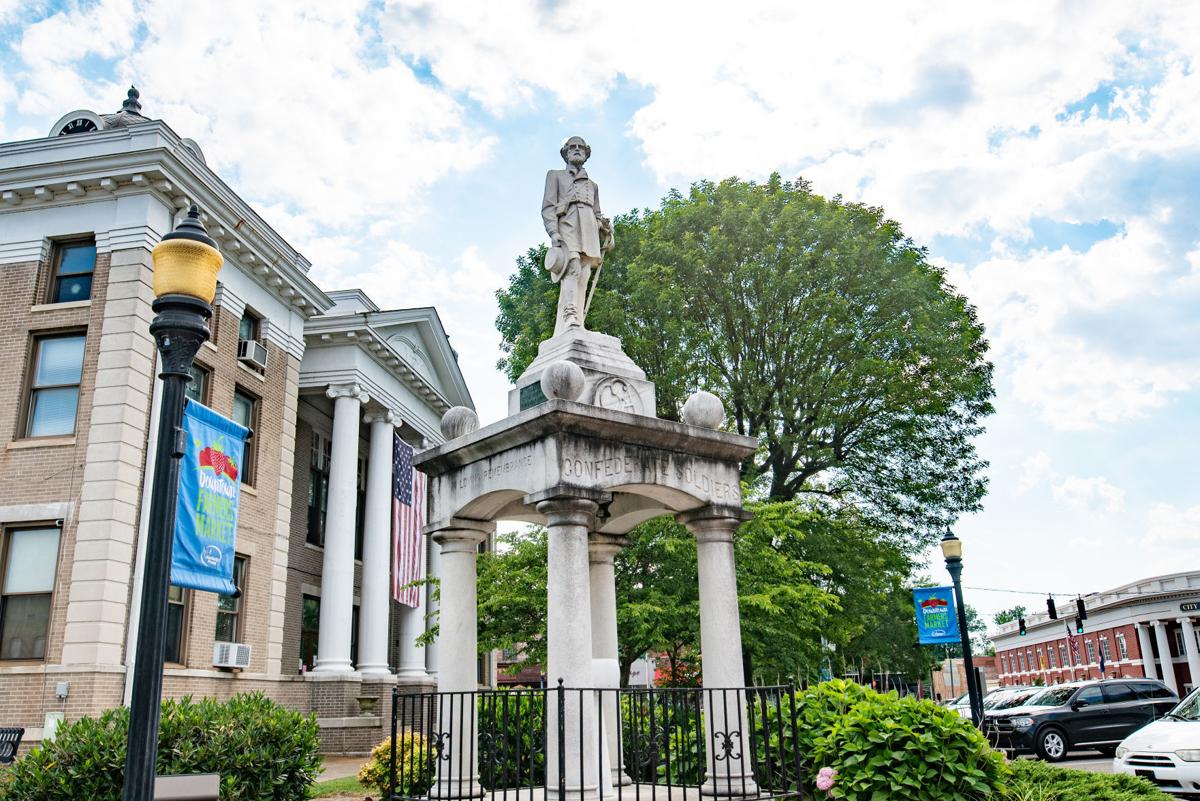 The Robert E. Lee statue on the lawn of the Calloway County Courthouse has become a source of controversy within the community, with some petitioning for its removal and others advocating for it to remain. 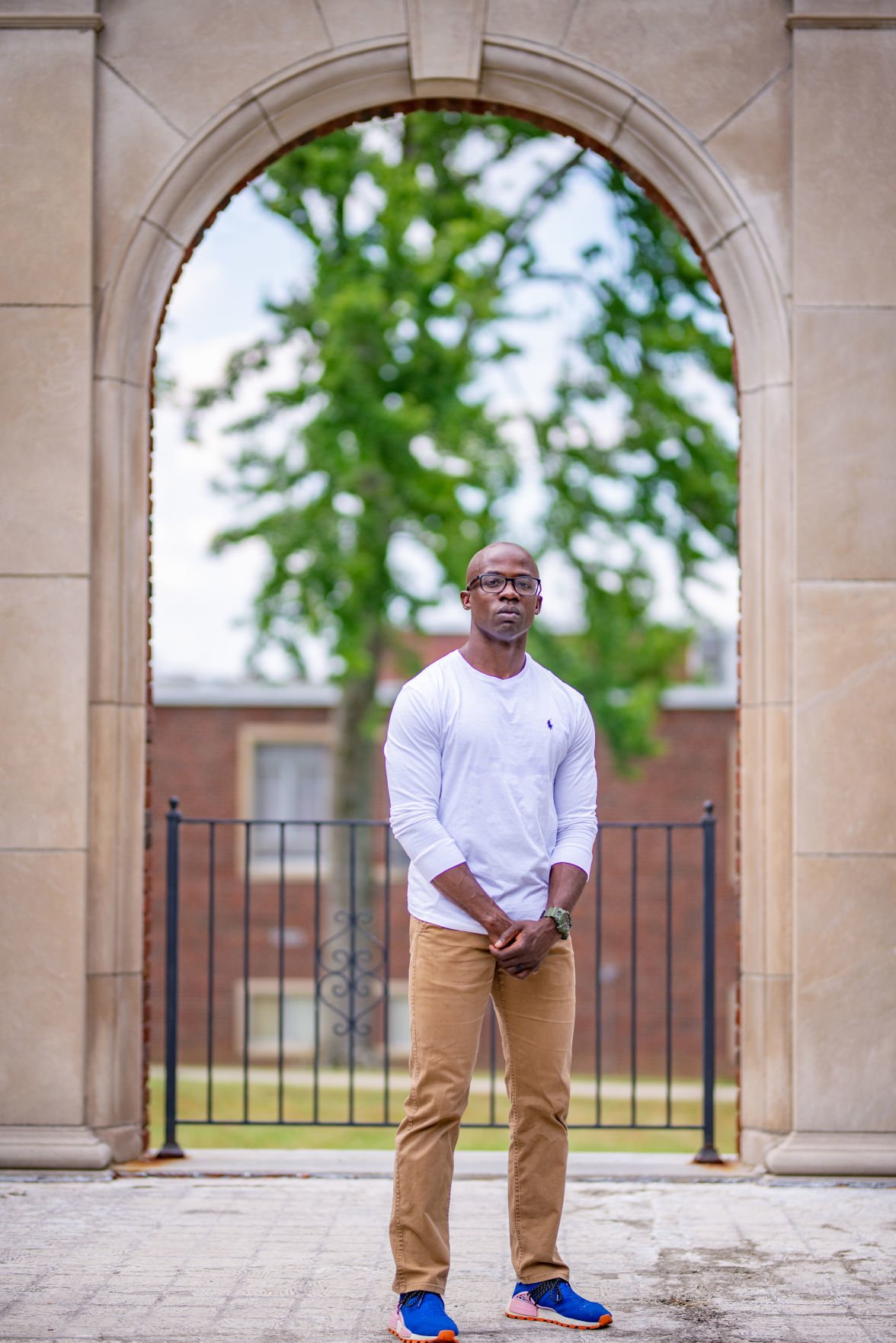 Sherman Neal, a football coach at Murray State University, stands for a portrait at the campus. Neal has become a strong voice in opposition to the Robert E. Lee statue that stands in front of the Calloway County Courthouse.

The Robert E. Lee statue on the lawn of the Calloway County Courthouse has become a source of controversy within the community, with some petitioning for its removal and others advocating for it to remain.

Sherman Neal, a football coach at Murray State University, stands for a portrait at the campus. Neal has become a strong voice in opposition to the Robert E. Lee statue that stands in front of the Calloway County Courthouse.

In early 2019, when Sherman Neal was considering moving to Murray to take a job as a football coach at Murray State University, he performed a simple Google search to find out about the city.

“The first thing that comes up is the statue,” he said.

The statue, a carven likeness of Confederate General Robert E. Lee, has stood sentry outside the Calloway County Courthouse for more than 100 years. It was commissioned shortly after the cornerstone for the courthouse was laid in 1913.

Though Neal has routinely run past the monument to Confederate soldiers, deploring the message the statue sends about the community, it took the death of George Floyd in a Minneapolis police incident last month to spark Neal into activism.

Since writing a letter requesting the statue’s removal at the beginning of this month, Neal has become a leading voice against the statue, and garnered support from Murray State University.

Though Neal, as a black man, objects to the cause of the Confederacy, his experience as a veteran also gives him further cause to deplore Lee — as a traitor.

At the last meeting of the Calloway County Fiscal Court, Neal called Lee, who joined the Confederacy after more than three decades in the United States Army, “an enemy combatant against the United States.”

He also pointed out that the Confederacy, a group of states which seceded from the United States in the 1860s, precipitating the Civil War, fought explicitly to preserve the institution of slavery.

“The man sitting on top of that statue was for the subjugation of other human beings,” he told the fiscal court.

Neal’s plea has garnered significant support, including from the university where he coaches.

The university’s history department, as well as its English and philosophy department, wrote letters in support of Neal.

As of Saturday, a change.org petition requesting removal of the statue had garnered nearly 10,000 signatures.

Neal initially took his case to the Murray City Council, but was redirected, as that body informed him the county owns the property where the statue is located.

Mayor Bob Rogers told The Sun that he and the council are working on a resolution to be voted on at their next meeting “which would request that the county locate the statue off of that property.”

“I understand all the perspectives,” Rogers said.

But Rogers said he’s most concerned for “the safety of the people in our community and or our property.”

He said the existence of the statue poses a risk in case of other protests or demonstrations that could end with someone injured, whatever cause they’re in support of.

“Nobody’s asking (the county) to tear it down or anything like that, but we’ll ask them to relocate it and preserve that history in another location.” Rogers lamented that the statue is gathering negative attention and causing the county to be seen as racially insensitive.

“That’s not our image, and we don’t want it to impact the ability of Murray State to recruit a diversity of students to our town and our area.”

Not all the response’s to Neal’s cause have been positive or even accommodating.

After Neal spoke to the fiscal court Wednesday, Murray resident Blake Hughes said removing the statue would be akin to “cultural genocide.”

“This is about getting power and control over people and using that to oppress them,” said Hughes, calling those who would remove the statues “Marxists intent on destroying our history and our way of life, doing so in the false name of equality and progress.”

“This is an attack on you and on me,” Hughes said.

“It won’t stop before our country is wholly unrecognizable to us.”

While at one point, a petition on change.org advocating against the statue’s removal had more than 2,000 signatures, the only such petition on the site Saturday had just over 600 signatures.

Neal said he’s encouraged by the support he’s had over the weeks of his campaign, referencing a failed effort by a group in 2017 to have the monument removed.

“This time is different, and this time we can change,” Neal said, adding that, whatever the opposition, he’s not quitting.

“I’m going to continue to try,” he said, confident he will continue to receive community support and hopeful that will be enough to sway the fiscal court into taking action.

He said in particular the support of the university could be a strong economic motivator, and the county may be forced to decide “whether Robert E. Lee is worth losing your main revenue source.”

For Neal, the issue is black and white, and the decision to remove a statue honoring a traitor and slave owner who fought for a pro-slavery cause should be a no-brainer.

“It’s something most of us should be able to agree is not a tradition that we want to honor,” he said.