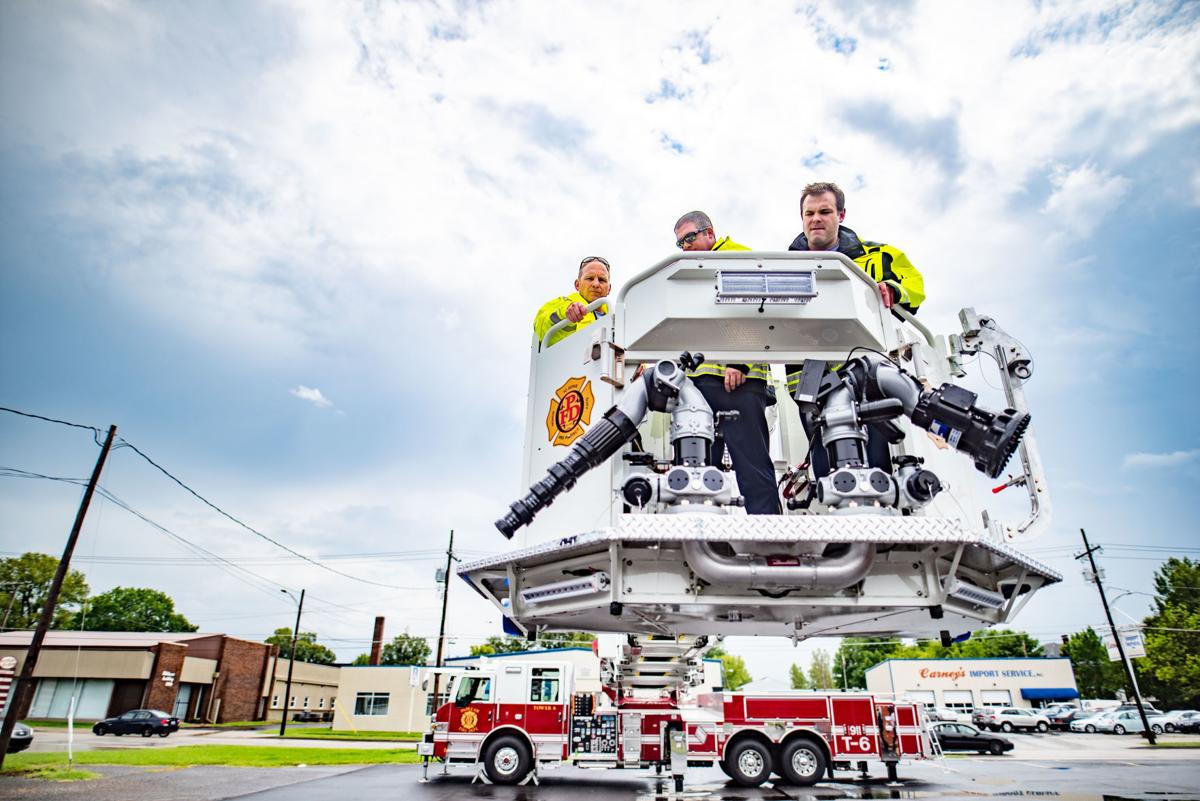 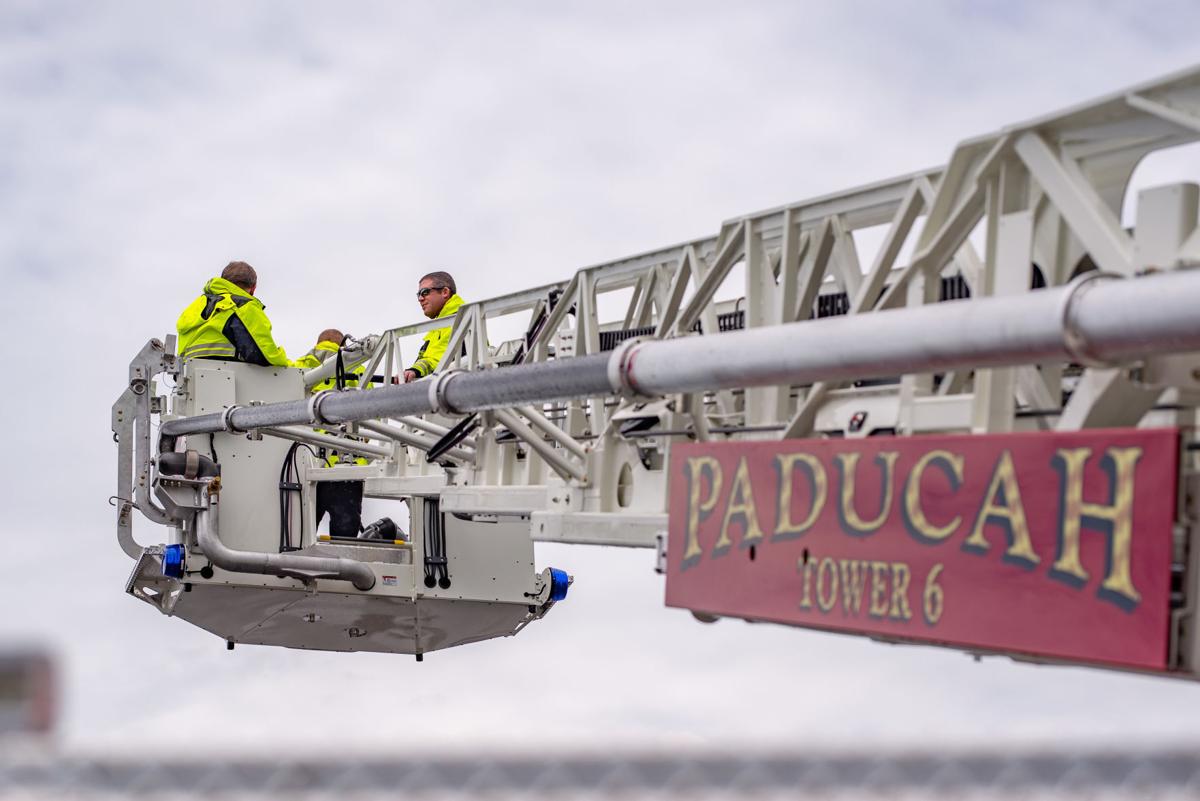 Paducah firefighters train on the city’s new platform truck Thursday. The truck replaces a 20-plus year-old vehicle that the department hopes to sell to recoup a portion of the cost. 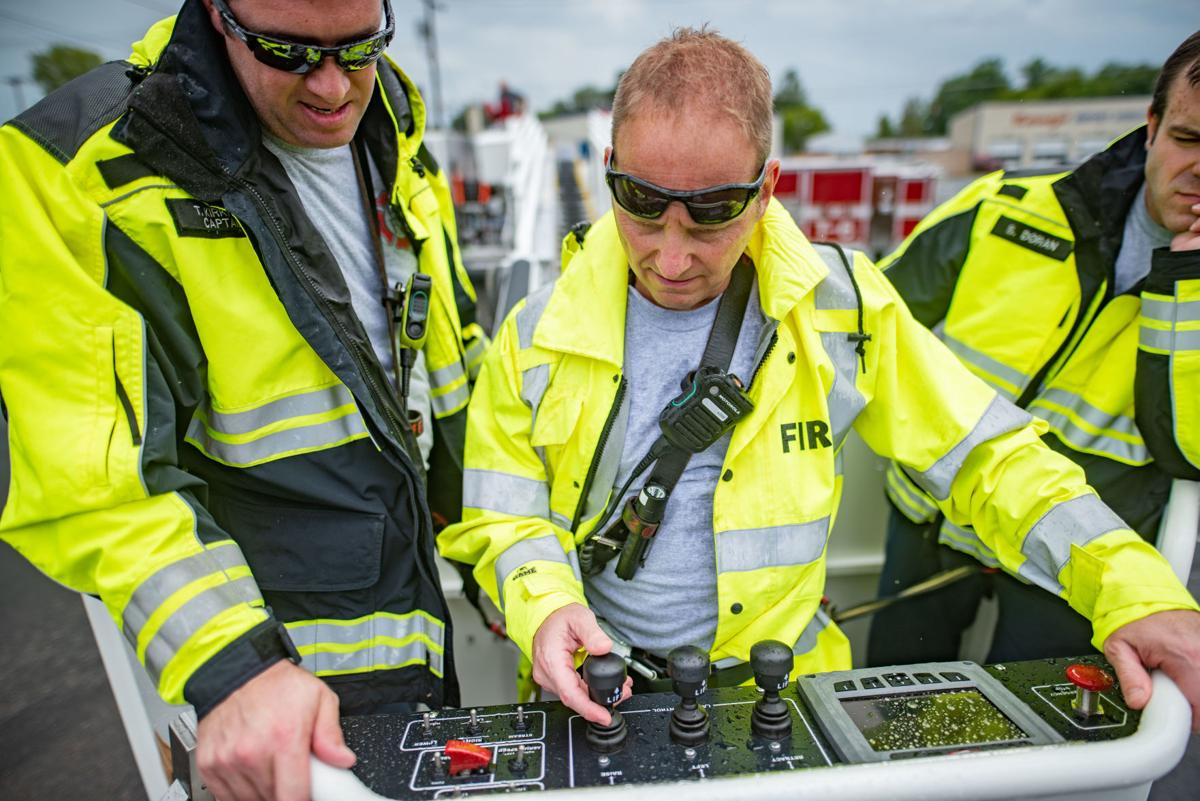 Assistant Paducah Fire Chief Patrick Hatton (center), accompanied by Capt. Tim Kirkham (left) and Firefighter Steve Doran, tests out the onboard controls on the platform of the city’s new firetruck, which is expected to be operational in the coming weeks.

Paducah firefighters train on the city’s new platform truck Thursday. The truck replaces a 20-plus year-old vehicle that the department hopes to sell to recoup a portion of the cost.

Assistant Paducah Fire Chief Patrick Hatton (center), accompanied by Capt. Tim Kirkham (left) and Firefighter Steve Doran, tests out the onboard controls on the platform of the city’s new firetruck, which is expected to be operational in the coming weeks.

The last time the Paducah Fire Department bought a new aerial truck, Barack Obama was in his first term, Taylor Swift was still a country singer and a small company called Zoom was trying to break into the videotelephony market.

With nine years of improved technology and design since then, the department is on the cusp of activating its new state-of-the-art platform truck that chiefs see as an upgrade in virtually every sense.

Deputy Chief Matt Tinsley said that, in part due to COVID-19 restrictions, only the group of firefighters stationed at the truck’s base of operations, Station Five on Broadway, and those who would replace them in an emergency or during their time off, have been trained on the new truck.

The rest of the department just wants to get a look.

“Several of them are doing a drive-by as we’re out training,” Tinsley laughed.

Now that the vehicle has been mostly outfitted and crews have been trained, Tinsley estimated the vehicle would be put into service by the end of the month.

Chief Steve Kyle said the platform truck is unlike any the department has used, having previously relied on ladder trucks for any aerial operations.

“It gives us capabilities that we’ve never had as well … especially from the rescue perspective,” Kyle said.

Among those capabilities are significantly reduced clearance needed to park the truck, a Stokes basket that attaches directly to the platform for rescuing injured victims, controls mounted on the platform and LED-lit rigging to illuminate dark situations.

Tinsley said the truck can also pump 2,000 gallons per minute and has two nozzles mounted on the platform.

“The ability to put two aerial nozzles off of one truck and cover both sides of the building,” Tinsley said, is significant.

“Those older buildings even though they may look different on the front, a lot of them are interconnected somehow.”

Kyle praised the maneuverability of the truck — both the platform that can descend to 20 feet below grade and the smaller footprint of the vehicle itself.

The truck, which Kyle said came with a price tag of $1.2 million, replaces the department’s oldest ladder truck, a 1994 model. He said firefighters are “appreciative” of the upgrades the truck brings.

“It has all the things on it to help keep them safe while doing their job,” Kyle said.

“I think it does give the morale a little boost to know that we’re going to stay on the edge of technology.”

The old truck is expected to go up for auction through a government website, but Kyle said he doesn’t have any expectations on what the department might be able to recoup from a truck more than a quarter of a century old.

“I’ll take all I can get,” he said, noting that if all stays well with the current vehicles, the department won’t likely be purchasing a new aerial vehicle for another 10 years or so.

“We’re expecting a minimum of 20 years” from each truck, Kyle said.

The department is planning an unveiling ceremony for the new apparatus once it enters service, but the date has not been determined.

Paducah firefighters train on the city's new platform truck. The $1.2 million vehicle brings a host of technological and maneuverability upgra…