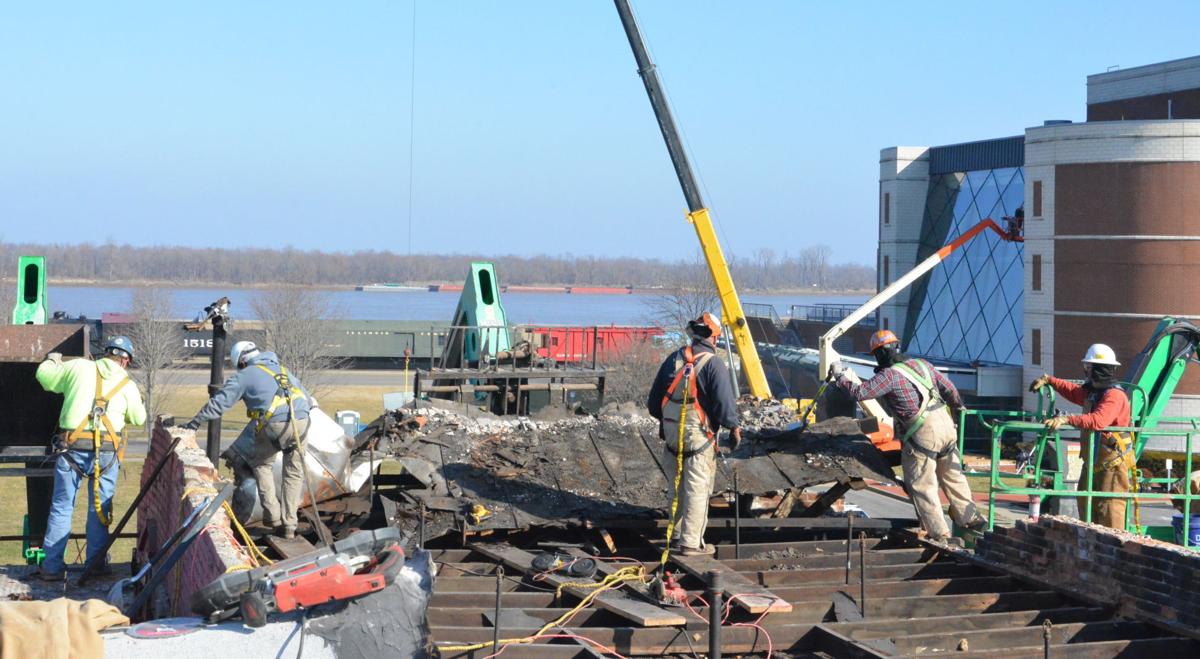 A team from Ray Black & Son construction works on the roof of the Finkel building Tuesday in downtown Paducah, demolishing portions of the second story in order to stabilize the building as a whole. The building is the final portion of Market House Theatre’s 10-year Next Stage campaign to establish an 11-building campus. 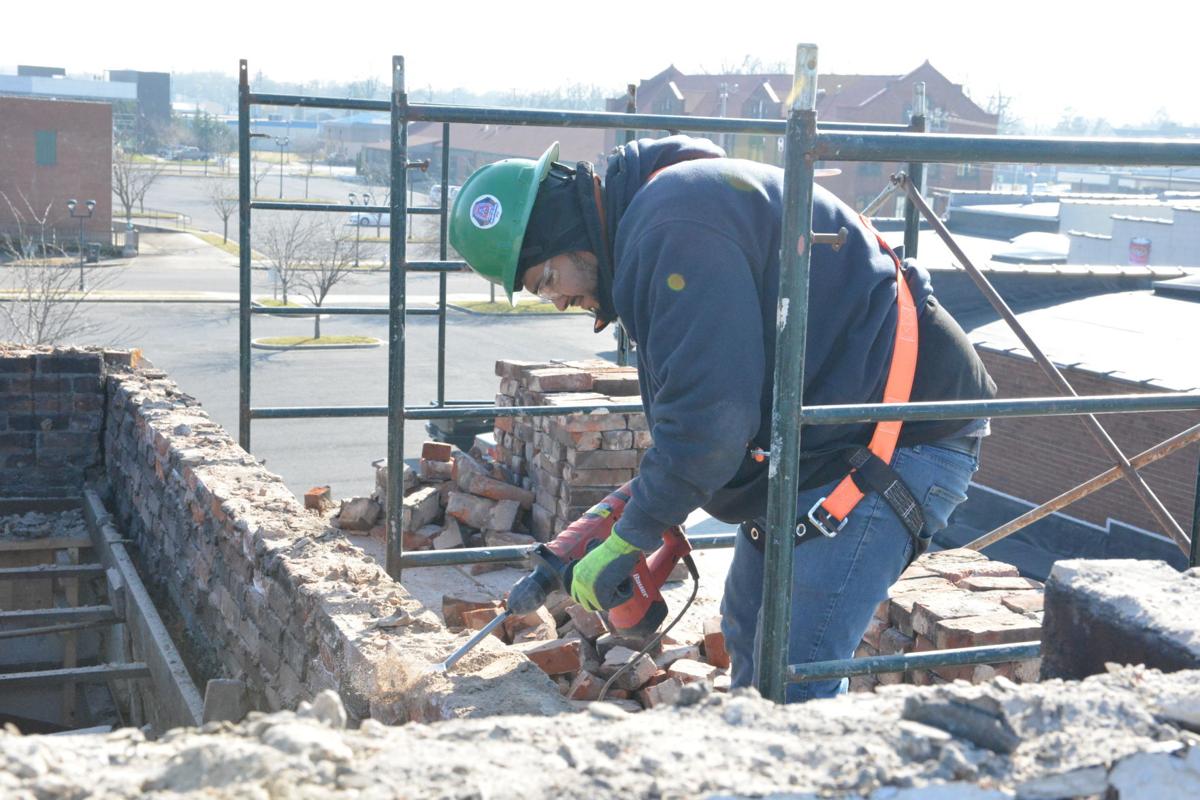 Josue Hernandez, of Ray Black & Son, works on the roof of the Finkel building — the renovation of which is the final piece of Market House Theatre’s Next Stage campaign — in downtown Paducah. Construction on the building is expected to be completed in June.

A team from Ray Black & Son construction works on the roof of the Finkel building Tuesday in downtown Paducah, demolishing portions of the second story in order to stabilize the building as a whole. The building is the final portion of Market House Theatre’s 10-year Next Stage campaign to establish an 11-building campus.

Josue Hernandez, of Ray Black & Son, works on the roof of the Finkel building — the renovation of which is the final piece of Market House Theatre’s Next Stage campaign — in downtown Paducah. Construction on the building is expected to be completed in June.

After a decade of planning, fundraising and renovating, Paducah’s Market House Theatre has reached the final act of its Next Stage campaign.

Once completed this year, MHT will have created an 11-building downtown campus.

The thing MHT executive director Michael Cochran is most proud of is that, throughout this process, his organization has adapted and fundraised to be able to come out of it debt free.

“The money informs the project. We adapt and we create with what we’ve got,” he said. “We will finish this project with no debt. Everything we’ve done so far we’ve paid off.”

Construction on the Finkel building — the former clothing store located on the corner of Kentucky Avenue and Marine Way — is the final portion of the $4.6 million project. The building’s former owners donated the property to the theater in 2017. Work on that began earlier this year and is expected to wrap up in June.

“The Finkel building was always the last piece planned because it was the thing that had the biggest cost,” Cochran told the Sun.

Portions of the building’s second story are being demolished in order to stabilize the remaining lower story and make them usable as programming spaces.

This is being done very carefully to preserve the structural integrity of the building, which Cochran feels is an apt metaphor for the project as a whole.

“Brick by brick, slowly and methodically to build a strong foundation is the perfect metaphor with each donation building on the one before it to reach the point that we have built a campus for theater, music and dance,” he said. “There were days I wasn’t sure we’d get to this point and we’re still not totally done, but to see what has been accomplished over 10 years is coming to fruition is nothing short of amazing.”

Early in the planning process, MHT leadership had envisioned building a large new children’s theater in the space. As the project evolved, it became evident that it would benefit the arts organization more to develop other buildings into a bevy of support spaces — a scene shop, prop storage, a meeting room, an event space, a costume shop and dance studios, among other resources.

“Over the 10 years, needs have changed. Our original design for this corner building was $2.3 million,” Cochran said. “The pandemic hit … we didn’t get (some tax credits we’d hope to get). So then we weren’t doing a $2.4 million project, we were doing a $1 million project.”

The total project shrank in cost from an originally proposed $6 million to its current $4.6 million price tag.

“The original business plan income goals for this project was accomplished five years ago with all of the growth that we had. Everything since then has been beyond what we imagined we could raise,” Cochran explained. “Adding this last piece in allows us to double the kinds of classes/recitals/dance things that we could do before.

“We’ve accomplished everything we’ve set out to do.”

All that’s left to raise is $150,000 to further improve the building once construction is completed. Cochran hopes to raise these funds by March. Anyone interested in donating can learn more at www.markethousetheatre.org.

MHT board of directors secretary Chris Beal is exceedingly pleased with the community backing the project has received over the last decade.

“Paducah has made it clear that Market House Theatre is a significant contributor to our quality of life and the downtown area is worth investing in,” he said. “To see the progress we have made after many years of planning is immensely gratifying.”

Through this new campus, Cochran hopes to make MHT a leading light among local theaters across the country — producing and putting on new and original plays, developing and educating local talent and bringing more and more great art to the community.

The board of directors is completely behind this mission.

“A great deal of strategic planning and wise leadership has gone into the development and execution of the Next Stage campaign,” said Jessica Vasseur, the MHT board’s president. “It’s taken many years for the theater to reach this stage of the campaign, and I am thrilled to see the many historic buildings getting repurposed and revitalized for future generations to enjoy.”