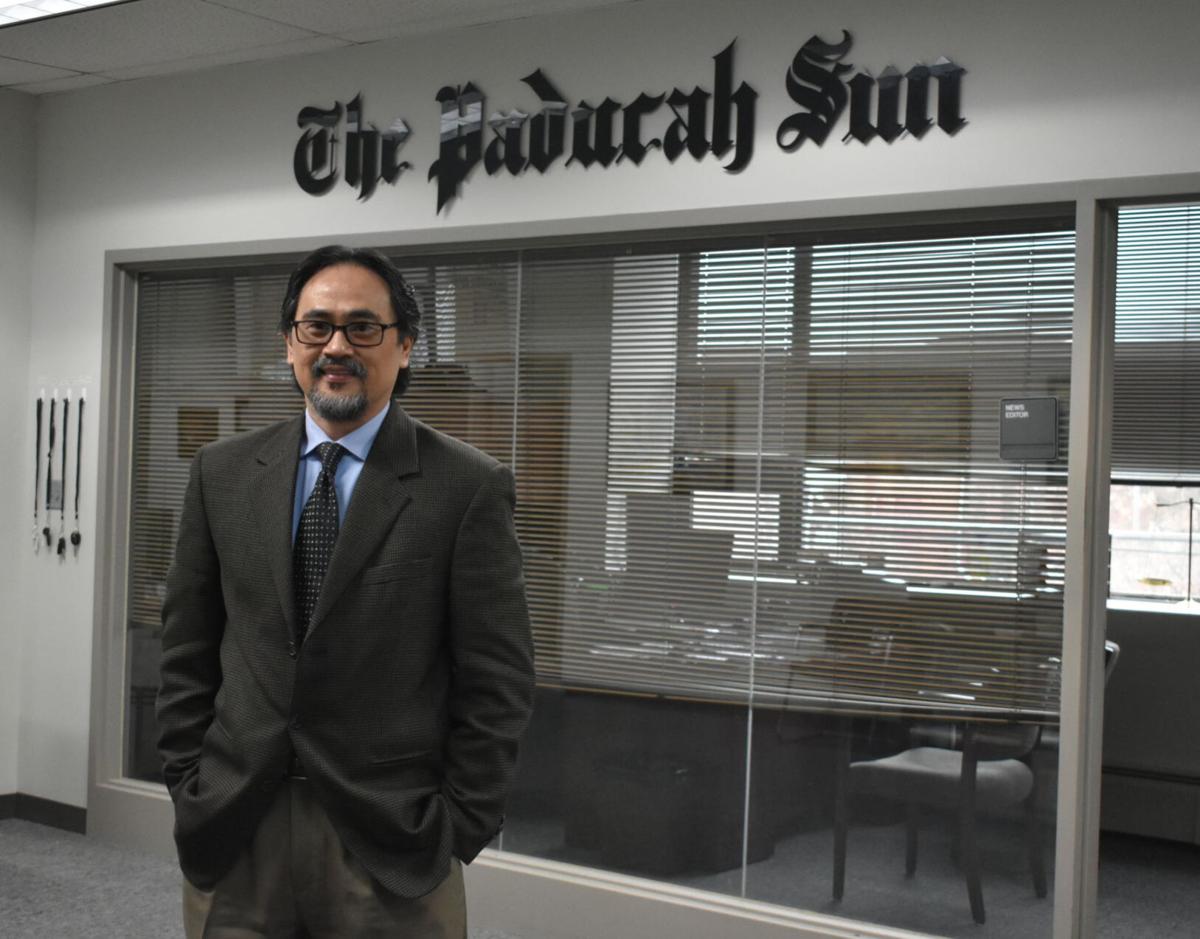 John Mangalonzo, managing editor for The Paducah Sun, started work at the paper on Monday, after relocating to the area in December from Virginia. He brings decades of journalism experience with him to The Sun’s newsroom. 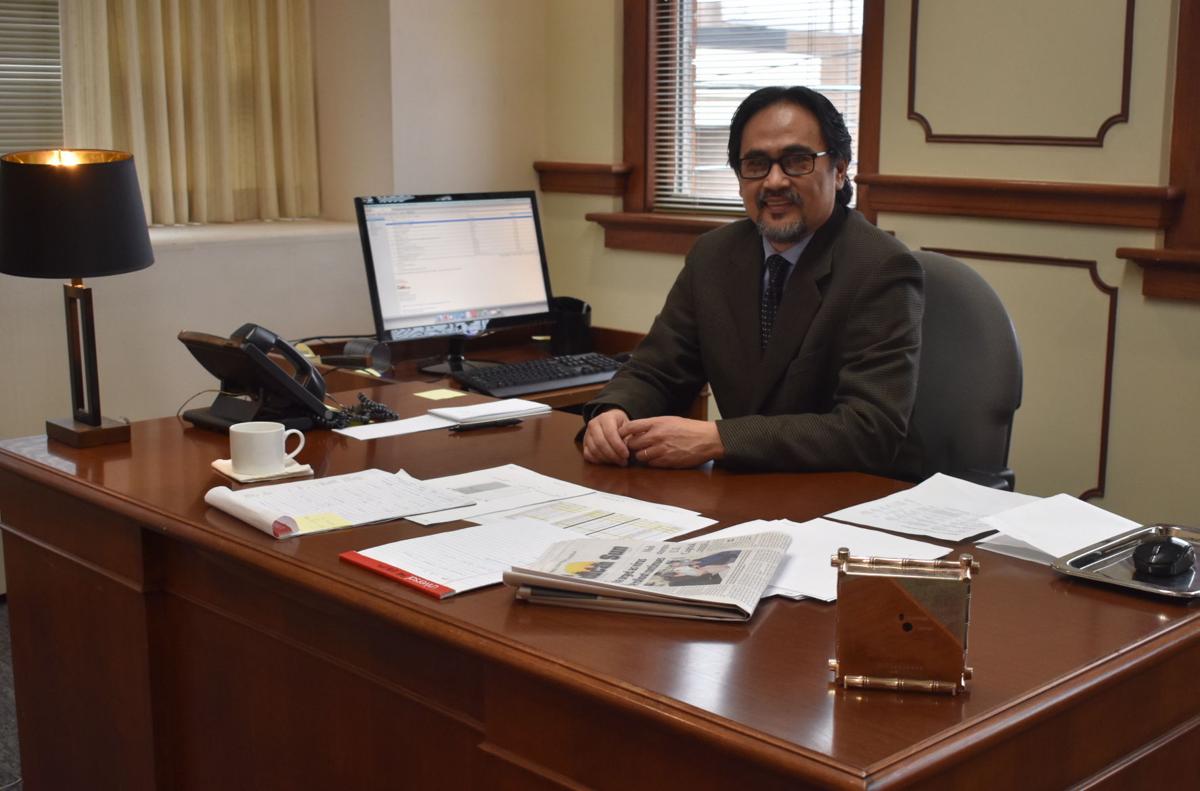 John Mangalonzo, managing editor of The Paducah Sun, sits at his office desk near The Sun’s newsroom earlier this week. He comes to Paxton Media Group’s flagship newspaper from Virginia and relocated to the area in December.

John Mangalonzo, managing editor for The Paducah Sun, started work at the paper on Monday, after relocating to the area in December from Virginia. He brings decades of journalism experience with him to The Sun’s newsroom.

John Mangalonzo, managing editor of The Paducah Sun, sits at his office desk near The Sun’s newsroom earlier this week. He comes to Paxton Media Group’s flagship newspaper from Virginia and relocated to the area in December.

Readers with a keen eye may have noticed a new name gracing the pages of The Paducah Sun this week: John Mangalonzo.

Mangalonzo, 51, is the paper’s new managing editor, filling a seat that had been vacant since Carrie Dillard’s departure in February 2020.

“I am humbled, honored and excited to lead the best media team in western Kentucky and southern Illinois into a new era,” he said earlier this week. “I believe The Paducah Sun and our weeklies serve a great purpose, and I’m committed to strengthening our presence and presenting stories that better reflect the communities we serve.”

Before joining Paxton Media Group, Mangalonzo was the managing editor for a trio of daily online publications in Virginia. He graduated with his degree from Lyceum of the Philippines University in 1990 and worked as a reporter in Manila until 1992, when he moved to the United States. Since then he has worked as an editor for papers in Washington, Utah and Nevada with other reporting and editing stints for papers in New York, California, Texas, Iowa and Colorado.

“John and I share the same vision when it comes to journalism. He and I are both First Amendment people. We know the importance of content to local readers and communities,” he said. “It just impressed me how much he got that.

“What excites me about John in this position is that he can marry the print content and the new digital formats and give our community and our readers so much more.”

Evans is also inspired by Mangalonzo’s roots in journalism, which stem from his growing up in the Philippines during the time of the People Power Revolution.

“In 1983 when a very popular senator in the Philippines was assassinated … everything was shut down, you couldn’t get the news, power was shut off … there was no radio or TV, the newspapers weren’t running,” Mangalonzo recalled.

“I realized that there were a lot of untold stories from people on the street and from the rebels and about why two career politicians jeopardized probably the rest of their careers and lives. I wanted to write about not only events, I wanted to write about how those events were affecting the lives of people. Seeking the truth is the ultimate mission of a journalist.”

It was that event that inspired Mangalonzo to be a journalist.

Evans hopes that under Mangalonzo’s leadership the paper will pursue deeper journalistic efforts, more investigative pieces and also a more enriched integration of video and photo content across the Sun’s web and social media platforms. Ideally, Mangalonzo said, the staff will be storytellers instead of merely reporters.

“News is about people and about their lives, and how each event affects their lives … when I first started this job in 1990, I covered five of the most dangerous cities in Manila,” the editor said. “We had shootings, stabbings, hackings every night. That could be all you wrote about. But to tell the stories of the people, that’s a different thing. We need the why.”

His time embedded with the military in the Philippines in the early 1990s colors his view on the role of newspapers in communities.

“I was there and I started writing about the actual stories instead of writing about gun battles, it served my purpose as a person and as a journalist, too,” he added. “It’s not only a source of information but it’s something that people can trust.

“We’re their history takers and their information one-stop shop. In a time of crises, that’s when we need to step up and be the source of that information.”

Hired in early December, Mangalonzo relocated to Paducah from Virginia in late 2020 with his wife of 23 years, Tina, and his 22-year-old daughter, Samantha.

Ultimately, Mangalonzo wants to carry on the long legacy of The Paducah Sun and create a newspaper that both he and the community he now serves can be proud of.

“(Readers) ought to look at us as still the dominant news source,” he said. “In the olden days, people would hear the news on the radio and they would watch it on TV, but they don’t actually believe it until they read it in the newspaper. That’s the level of trust that people should put in a newspaper.”