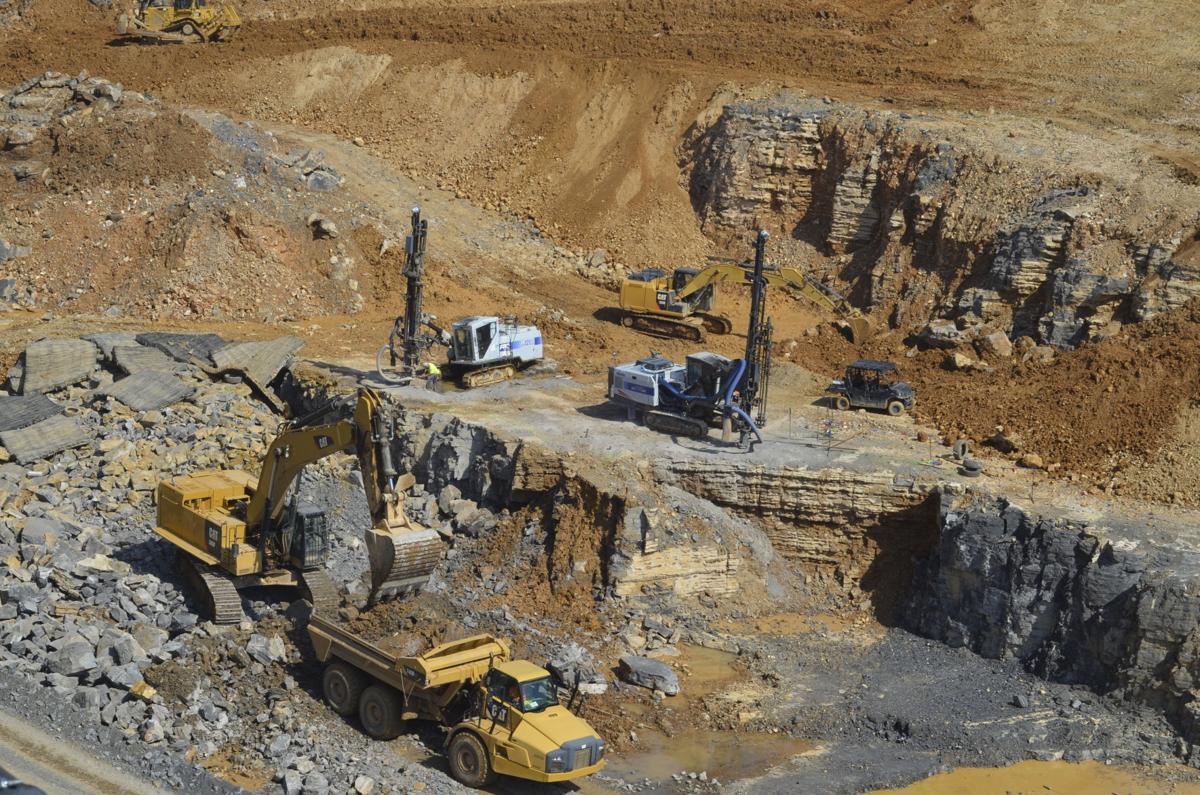 Excavation work continues on the site of the main chamber of the planned new 110-foot by 1,200-foot lock being constructed next to the existing 110-foot x 600-foot one, part of the Kentucky Lock Addition project. 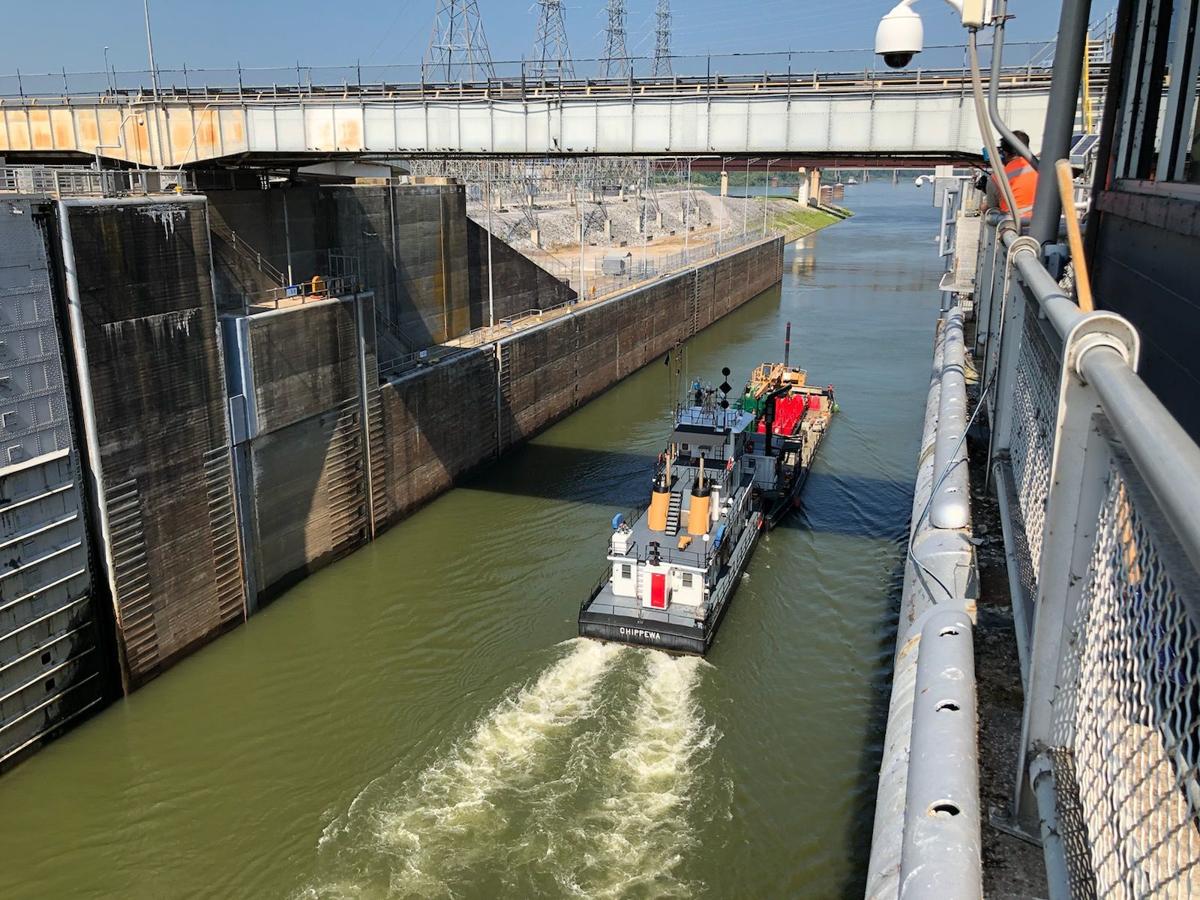 The U.S. Coast Guard Cutter Chippewa, an inland buoy tender, passes through the Kentucky Lock on Tuesday. U.S government vessels are given first priority in locking. 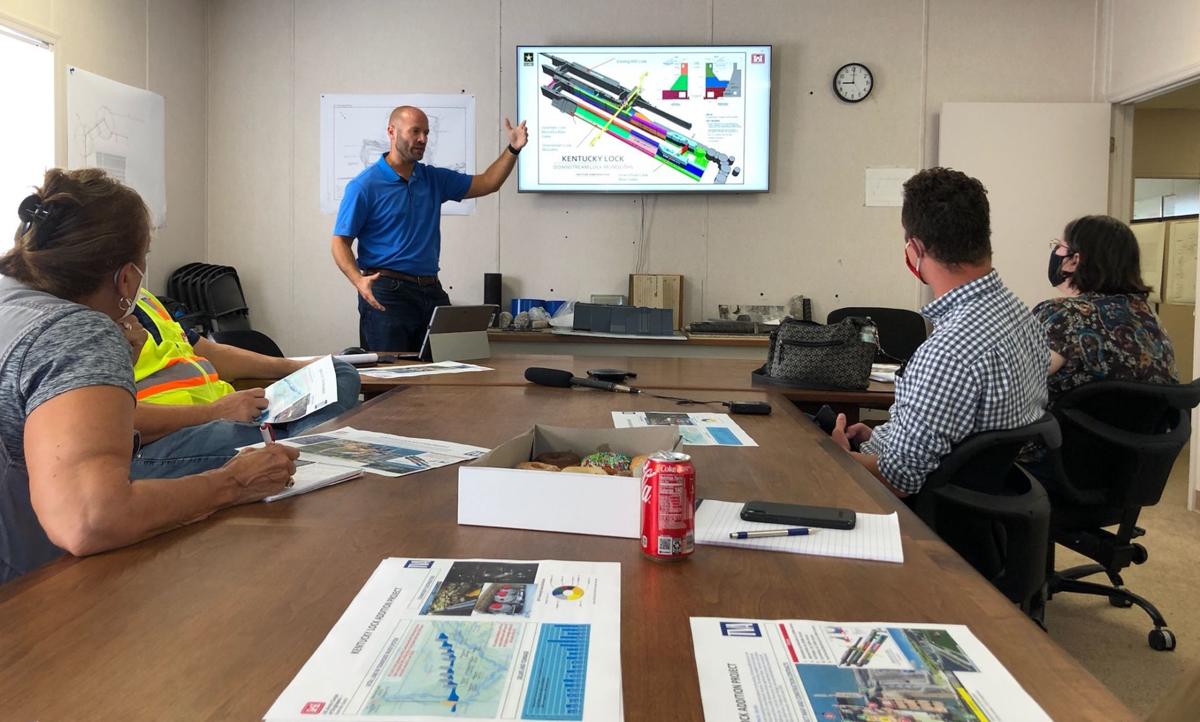 GRAND RIVERS — This week’s media tour of Kentucky Lock hosted by the Waterways Council Inc. — to highlight the importance of locks and dams to the inland waterways system — was particularly well timed.

The $1 trillion infrastructure bill approved by the Senate Aug. 10, which the House is expected to act on by late September, includes $2.5 billion for construction of inland waterways projects, according to the WCI, a national advocacy organization.

“While they may be more out of sight than roads or bridges, locks and dams are critical infrastructure that facilitates transport of our nation’s key bulk commodities that help bolster our economy,” said Deb Calhoun, WCI senior vice president.

“This infrastructure allows American farmers to get their products to the export market in the most cost competitive way to help the U.S. compete in foreign markets.

“Energy products like petroleum, fuel and coal, grain, aggregate materials (cement, gravel, sand, steel) for construction, and large cargoes like rocket boosters and wind turbine blades are all moving on our inland rivers,” she said.

According to the U.S. Army Corps of Engineers, Kentucky Lock is the third highest priority lock project in the U.S.

It serves as a gateway to the Cumberland and Tennessee rivers that comprise 29% of the Ohio River basin and carry 57 million tons annually valued at more than $10 billion.

The Kentucky Lock Addition project was initially authorized in 1996, with construction beginning in 1998. Getting consistent funding has been an ongoing concern, said USACE officials who briefed local and industry media on the project earlier this week.

“This project fundamentally started about the same time Olmsted did and both of those projects were grossly underfunded,” said Jeremiah Manning, project manager.

The Kentucky Lock project and Olmsted Lock & Dam projects were kind of running parallel to each other, when Olmsted’s funding was prioritized as having a greater benefit to the nation, he said.

“So here at Kentucky Lock, now that that project (Olmsted completed in 2018) is out of the way, that funding is flowing into the rest of the projects that are going on,” he added.

The current total project cost of the Kentucky Lock Addition is $1.23 billion, with $540 million spent to date. The forecast for completion is Fiscal Year 2029, Corps officials said.

The project is being completed in stages, with contracts being awarded at various intervals.

The project includes a new 110-foot by 1,200-foot lock being constructed on land next to the existing 110-foot by 600-foot lock, which will greatly reduce wait time for vessels locking through.

The new lock will allow a modern, 15-barge tow to pass through in one lockage. With the current lock, that tow would have to be broken up into two lockages.

“This year, we’re sitting at a 12 to 13 hours per vessel of delay time,” said Caleb Skinner, navigation manager.

“Their overhead rate averages around $500 an hour, so it doesn’t take long to do the math and realize how much money per year it is costing industry. Those costs then get passed along to the consumer all the way down to the end users, like ourselves as taxpayers.

“When this new lock is built — and we go to zero delay — that’s going to be a huge economic impact for all of our users,” Skinner said.

The current lock will remain in operation once the new one is completed.

“The existing lock, combined with the double-sized lock (1,200-foot), is going to allow us to accommodate those larger vessels in a single lockage while still being able to use that smaller lock for the tows,” Manning said.

Skinner said there are four basic categories of vessels locking through. They are, in order of priority: U.S. government vessels; pay-for-hire passenger vessels; commercial industry vessels (the bulk of those seen at Kentucky Lock); and recreational vessels.

Regarding that fourth category, “We’ve locked a raft with somebody rowing. You’d be surprised because taxpayers want to use their lock,” he said.

“So, anything from a kayak to a jet-ski (that you can sit on, not stand on). If they’re wearing a life jacket and they’re not in the water. If they can get through safely, we’ll lock them through.”

Calhoun said the media tours are one way to help remind people not directly involved with the inland waterway system just how important it is.

“The (inland waterways) system is such a gift to our nation and provides so many opportunities beyond just for commercial shipping, she said.

“The lock and dams enable recreation for fishing and boating, hydropower, municipal and industrial water supply and community and waterfront property development.

“The inland waterways are the safest, most fuel efficient, most environmentally friendly among surface transportation modes, and they relieve traffic congestion, which is important to all of us.”