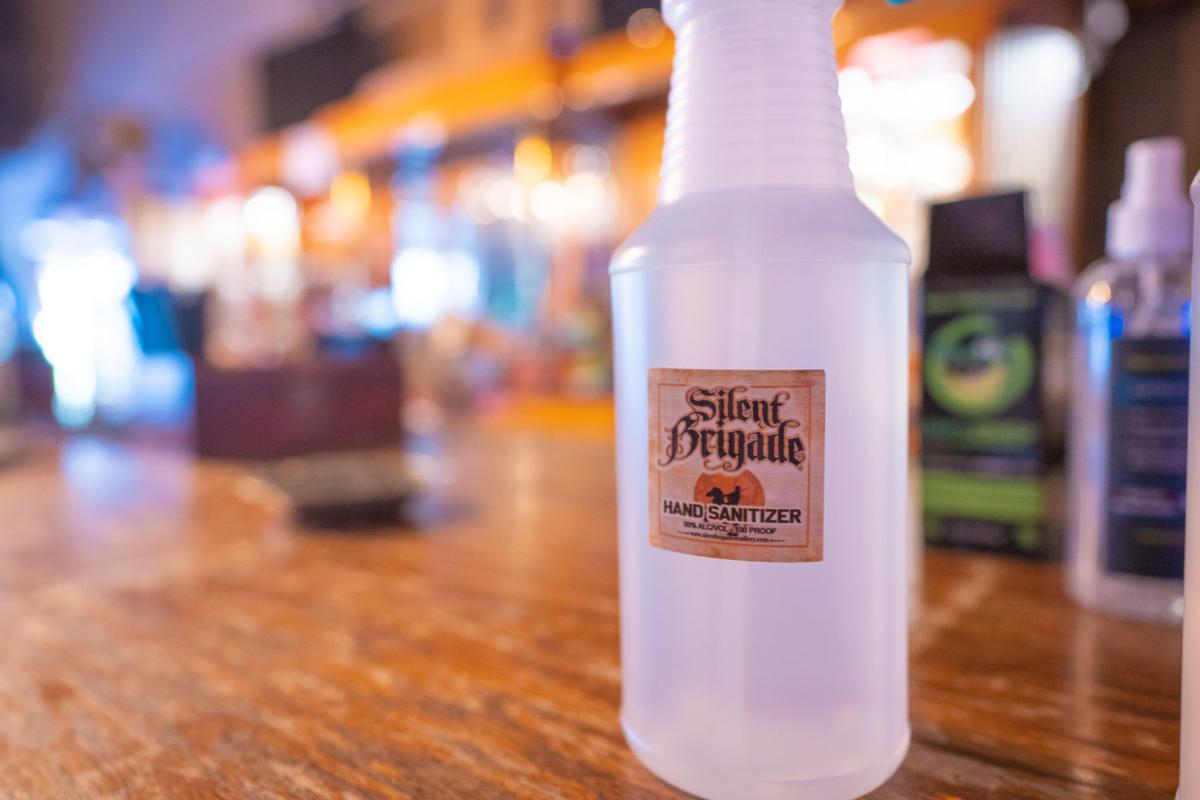 Silent Brigade Distillery in downtown Paducah typically makes and distributes moonshine in various flavors, but has been utilizing its distillation facility for the production of hand sanitizer in the wake of the COVID-19 pandemic. 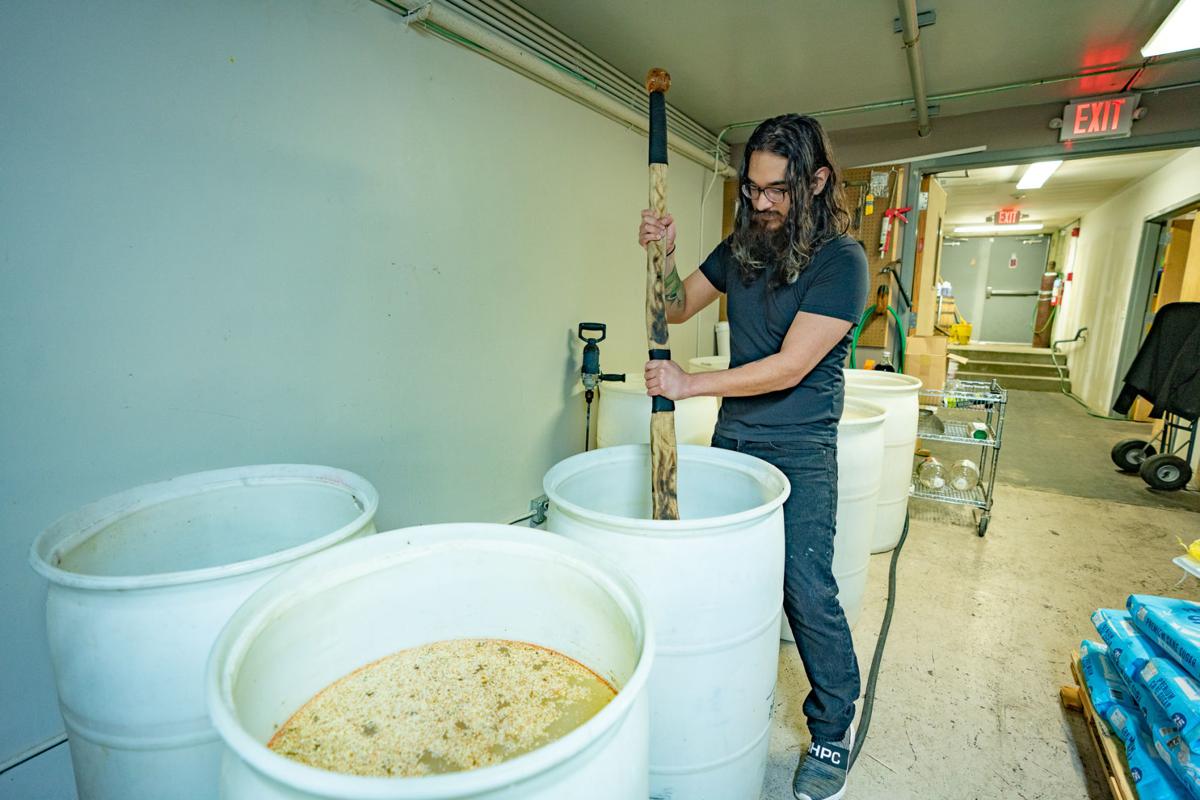 Octavio Ramos, Silent Brigade Distillery bar manager, checks on a batch of mash Tuesday at the distillery in downtown Paducah. Silent Brigade is making hand sanitizer and giving it to the public for free. Hand sanitizer has become a commodity in recent weeks due to the coronavirus pandemic. Check Silent Brigade’s Facebook page for updates on its supply.

Silent Brigade Distillery in downtown Paducah typically makes and distributes moonshine in various flavors, but has been utilizing its distillation facility for the production of hand sanitizer in the wake of the COVID-19 pandemic.

Octavio Ramos, Silent Brigade Distillery bar manager, checks on a batch of mash Tuesday at the distillery in downtown Paducah. Silent Brigade is making hand sanitizer and giving it to the public for free. Hand sanitizer has become a commodity in recent weeks due to the coronavirus pandemic. Check Silent Brigade’s Facebook page for updates on its supply.

Hand sanitizer is a commodity these days because of the coronavirus, and downtown Paducah's Silent Brigade Distillery found a way to help residents get their hands on some.

The distillery started making its own.

The distillery, 426 Broadway, is closed for regular business due to Gov. Andy Beshear's temporary restrictions for bars, restaurants and other establishments, but it's still selling moonshine products and now creating substantial batches of hand sanitizer. It joins a nationwide trend of distilleries pitching in by using facilities to make the product.

"We are giving it away to the general public for free," Silent Brigade bar manager Octavio Ramos said.

"There are those that want to buy multiple pallets, multiple gallons that we might end up having to charge just because they’re putting in a big shipment order for us to do, but as for right now, just to the everyday average customer, you can come in and get you a bottle. We’ll give you what we can.”

Owners John Brown and Keith Bundy came up with the idea to use alcohol that the business is already making and turn it into hand sanitizer with just a few extra steps, said Ramos, who explained the distillery wanted to do its part to give some peace of mind to people, in light of recent economic uncertainty with COVID-19.

Many people walked into the distillery shortly after noon Tuesday, where they picked up some hand sanitizer and/or bought moonshine. The hand sanitizer supply went quickly.

Paducah's Miranda Snodgrass and Benton's Barry McIntosh were two of the visitors and they both reported having trouble finding the typically available, everyday item at stores.

"I think it’s a great thing that they’re doing for the community to try to help out in a trying time," said Snodgrass, who heard about it on Facebook. "You know, we want to support our local businesses while they’re trying to support us.”

McIntosh said he'd been tired of being cooped up and heard Silent Brigade was giving away hand sanitizer and came down to pick some up and maybe to "do some business."

"Everywhere we go, they’re out," he said. "It’s like everything else right now — toilet tissue, meat — you’ve got to get there early. We were lucky to get this. I mean, this here will last us a long time.”

Silent Brigade's lead bartender, Ariana Mundy, added that Paducah has given "so much" to the distillery the past five years that the least the distillery can do is give back.

"My mom is actually a nurse and my grandma, she’s elderly in her mid- to late-80s, so they’ve both been really nervous about this whole thing going on," Mundy said. "I’ll take a little bottle to them every now and then and they just get so happy about it, so I just, I’m happy that the regular people who are struggling, that are scared, they have at least a little bit of relief from it.”

From start to finish, Ramos described the production process.

It involves making the mash, letting it ferment, running it through the still, distilling and cooling it, before turning it into hand sanitizer and bottling it. The "quickest rate" takes about a week and a half.

"Our batch — we’re doing it to keep it all nice and healthy for everybody, we’re only adding Aloe vera and coconut oil and a few other, like, gumming agents to it, so it’s all natural ingredients and super healthy and smells delicious as well," he said.

The first batch consisted of about 30 gallons, while a second batch — featuring a more gel-like consistency — was 15 gallons. Ramos said 350 gallons is now in the works in the back of the distillery.

"Once we go through that one, if we are still in crisis and we still need it, then we’re going to keep going because even after the COVID-19 is over, there’s still going to be a shortage and a high demand for sanitizer, so we’ll just keep on planning to make it until there’s no need anymore," he said. "We’ll just turn that alcohol that we were going to make sanitizer back into drinkable alcohol."

Anyone interested in Silent Brigade's hand sanitizer can check the distillery's Facebook page for updates on availability. It may also be contacted at 270-709-3242.