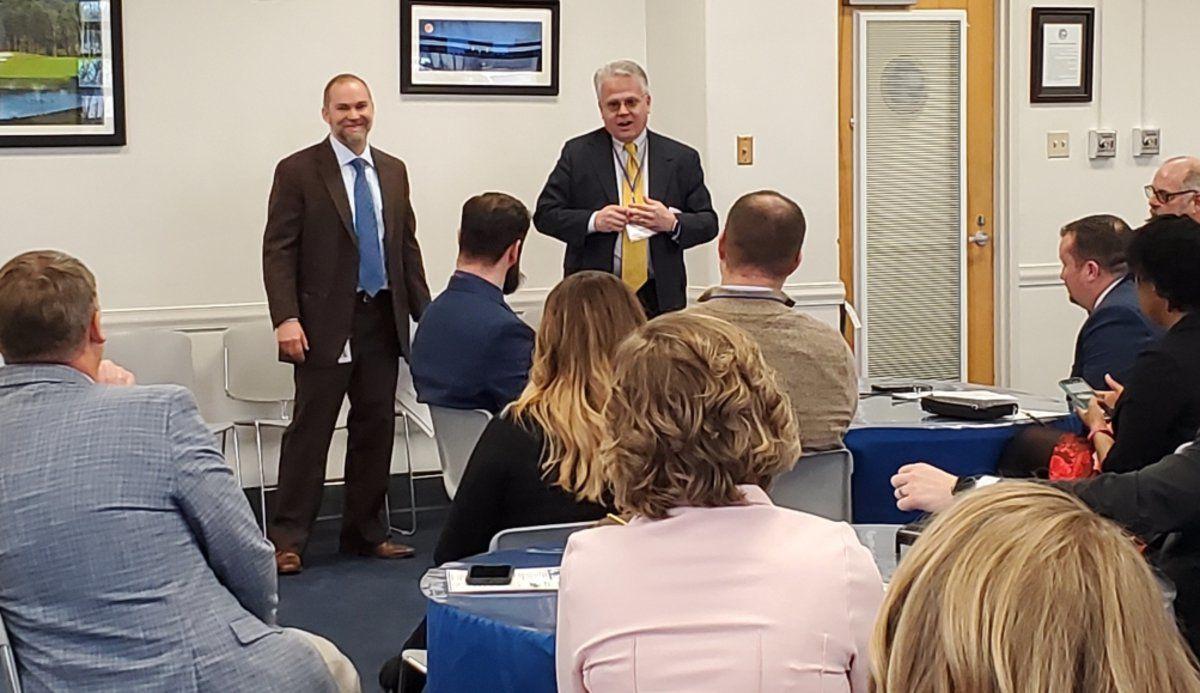 Glenn Denton (standing, center) introduces John McConnell (left) to members of the Paducah Area Chamber of Commerce in a breakout session as part of "Paducah Chamber Day in Frankfort" Thursday. McConnell, from Murray, is the executive director of boards and commissions. 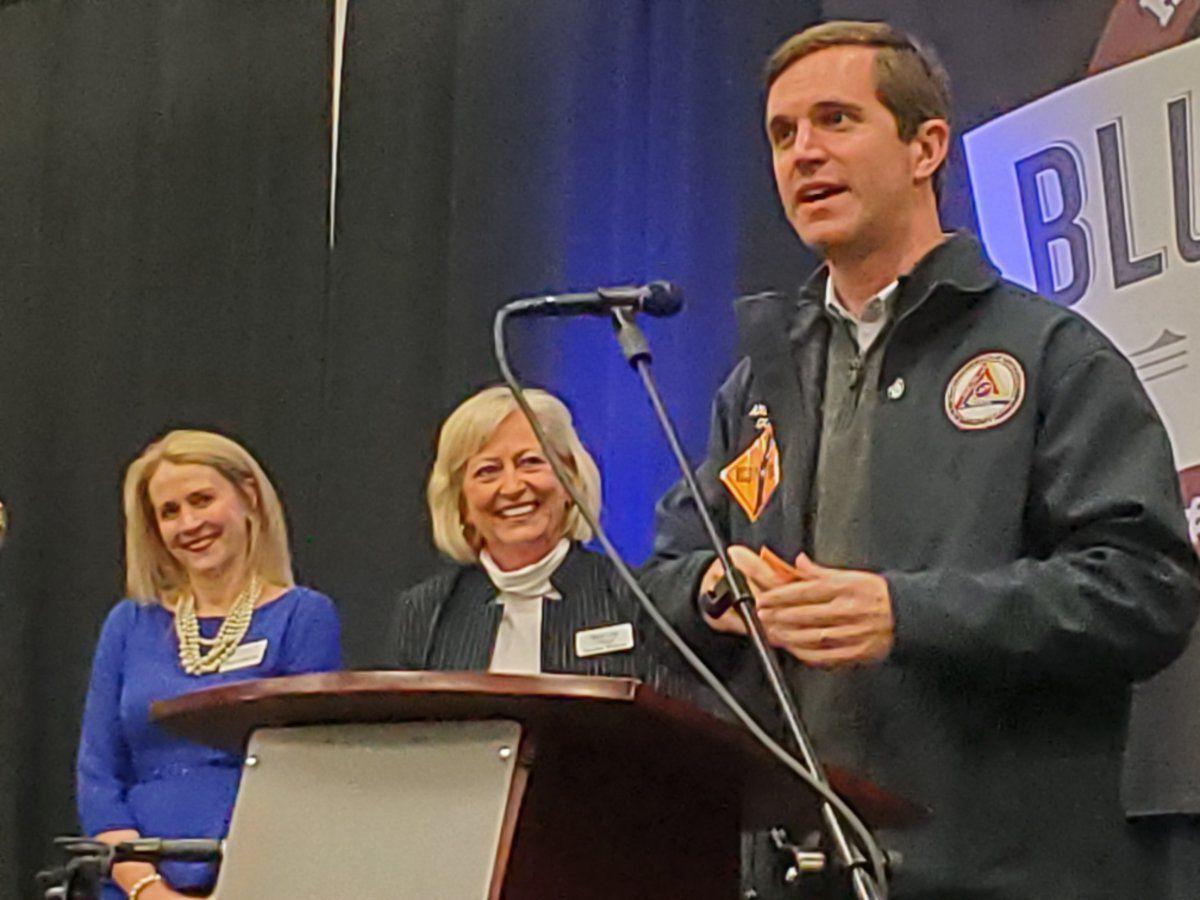 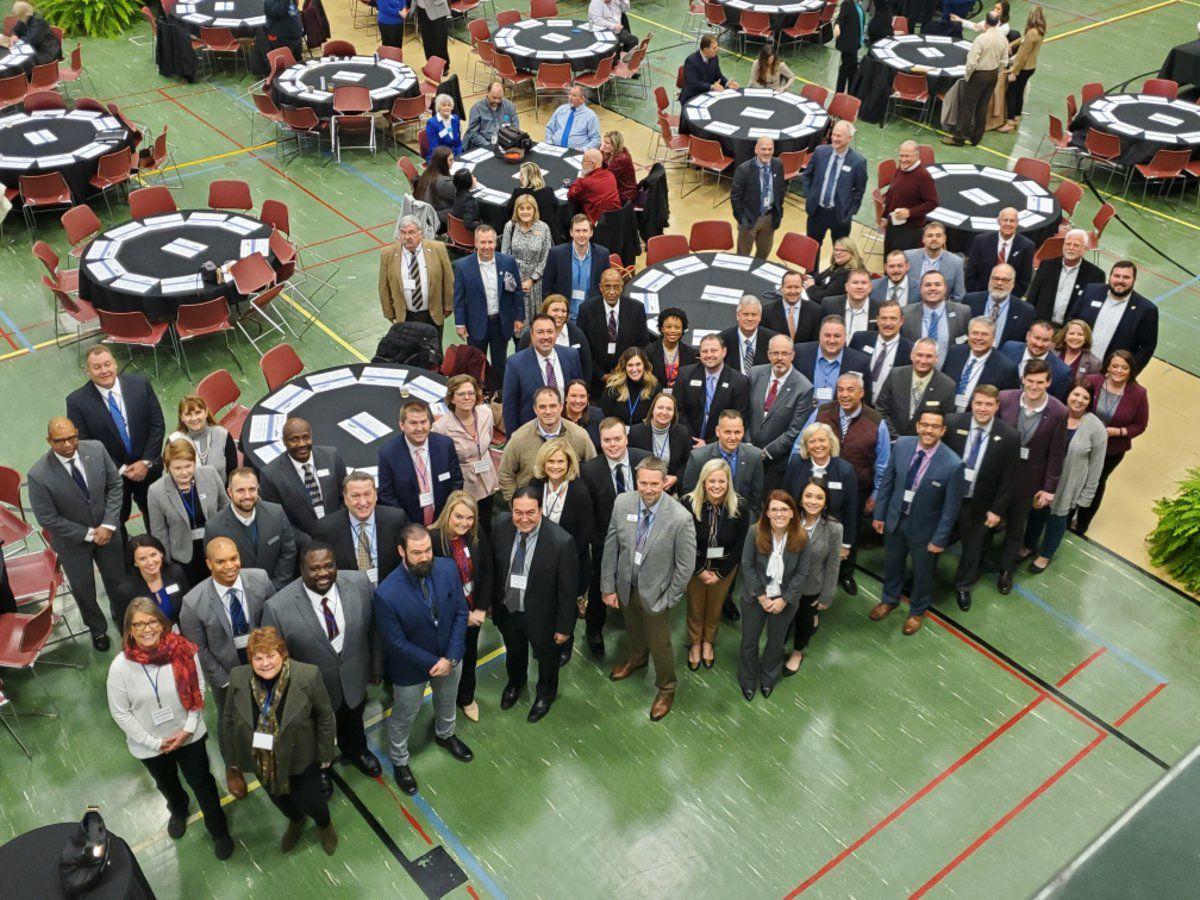 The Paducah Area Chamber of Commerce was well represented at "West Kentucky Thank You Night" Thursday at the Exum Center at Kentucky State University. The evening event, which featured a keynote address from Gov. Andy Beshear, drew approximately 400 representatives of 26 chambers.

Glenn Denton (standing, center) introduces John McConnell (left) to members of the Paducah Area Chamber of Commerce in a breakout session as part of "Paducah Chamber Day in Frankfort" Thursday. McConnell, from Murray, is the executive director of boards and commissions.

The Paducah Area Chamber of Commerce was well represented at "West Kentucky Thank You Night" Thursday at the Exum Center at Kentucky State University. The evening event, which featured a keynote address from Gov. Andy Beshear, drew approximately 400 representatives of 26 chambers.

The Paducah Area Chamber of Commerce contingent made the most of its "day" trip to Frankfort Thursday, meeting with legislators, state officials, cabinet secretaries, and hearing a keynote address from Gov. Andy Beshear.

"Paducah Chamber Day in Frankfort" is the business organization's annual trek to the state capital to advocate on behalf of projects and issues of interest to the local community.

Approximately 70 local community and business leaders made the trip.

"We had a great day," said Sandra Wilson, chamber president. "The process of what goes on in Frankfort is so important to our community to be involved in."

The day-long bus excursion included meeting with three new cabinet secretaries with the Beshear administration, including Transportation Secretary Jim Gray, who was the keynote speaker at a legislative luncheon at Buffalo Trace Distillery.

Kentucky's new governor, fresh off a flyover of the flooding in the eastern part of the state, addressed a crowd of approximately 400 representatives of 26 chambers at "West Kentucky Thank You Night," held at the Exum Center at Kentucky State University.

"West Kentucky is very special to me," the governor told chamber members from Owensboro to Hopkinsville, to Paducah and Fulton.

He spoke about the state's budget and how important it is for the two political parties to work together.

"None of the needs we have as a state are partisan. We can wake up and work on those issues together," Beshear said.

He also said part of his job is to attract high-paying jobs to the state and offer the right climate to get those jobs, which is why infrastructure is a top priority. He touched on funding for the Interstate 69 bridge connecting Henderson and Evansville, Indiana, and helping the state become a leader in agri tech.

"He talked about how it (transportation) is how people get to work, get to their families, go on vacation ... when you think about it, that's everything, highways, to rail, to river, to runways."

He also praised Paducah's successful effort to land a BUILD grant and for collaborating with area chambers for a regional approach.

In between the two keynote sessions, chamber members broke into groups and met with several other state officials, including Mike Berry, secretary of the Tourism, Arts and Heritage cabinet, and Rebecca Goodman, secretary of the Energy and Environment cabinet.

"We talked about our own (U.S.) Department of Energy site that she (Goodman) has strong ties with through the cabinet," Wilson said. "Our site contractors were there in a meeting with her and plan to have her down to the site for a tour."

"We appreciate the time our local legislators took to be with us and meet with representatives from our community while we were in Frankfort," she said.

"I've been (to Frankfort) once before with my Leadership Class, but this was the first time I've been in this capacity. I really enjoyed it," he said.

"We got to hear from John McConnell. He's from Murray and has a business here in town as well," Beyer said. "He's recently been named executive director of boards and commissions. He was very encouraging for us in this part of the state to be intentional and try to be active on those boards.

"We also got to hear from Jeff Taylor, of Hopkinsville, the commissioner of the office of business and community services. He's a great speaker. He owns property here in Lower Town and has a family connection here as well."

Taylor told the chamber, "I'm very impressed with what's going on in Paducah. In your downtown, river and rail, you have all the right ingredients."

According to Beyer, the group had several opportunities to remind state officials of the importance of the planned new terminal at Barkley Regional Airport.

"We need support from the state. We're still very hopeful that it (funding) will happen," he said.

"Right now, it's one of the most critical things that our community has in front of us for the long-term betterment. Hopefully, our presence there will have some effect on the funding of that."