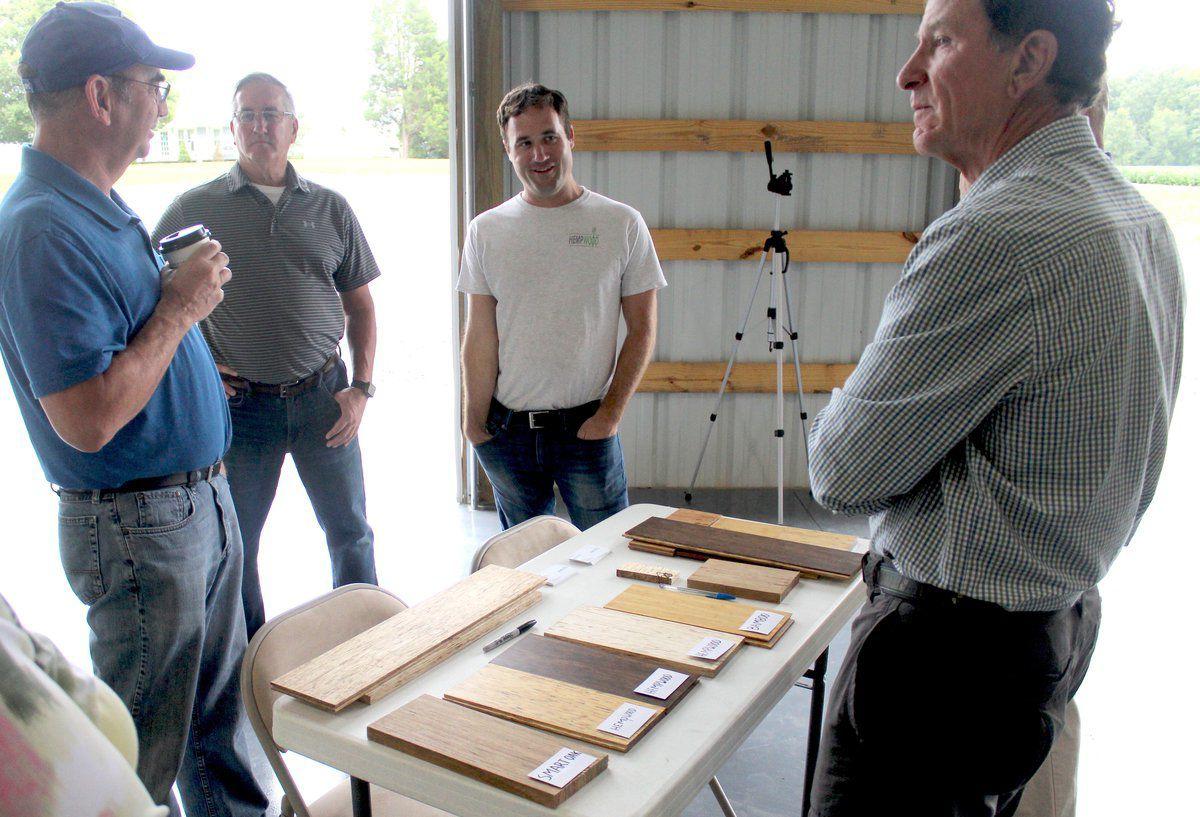 Greg Wilson (center) talks with attendees at the HempWood plant opening ceremony about the similarities between hemp wood and other woods on a display table, such as bamboo or smart oak, a eucalyptus-based product. According to hempwood.com, hemp wood can be used in every way that oak wood can and is 20 percent stronger. 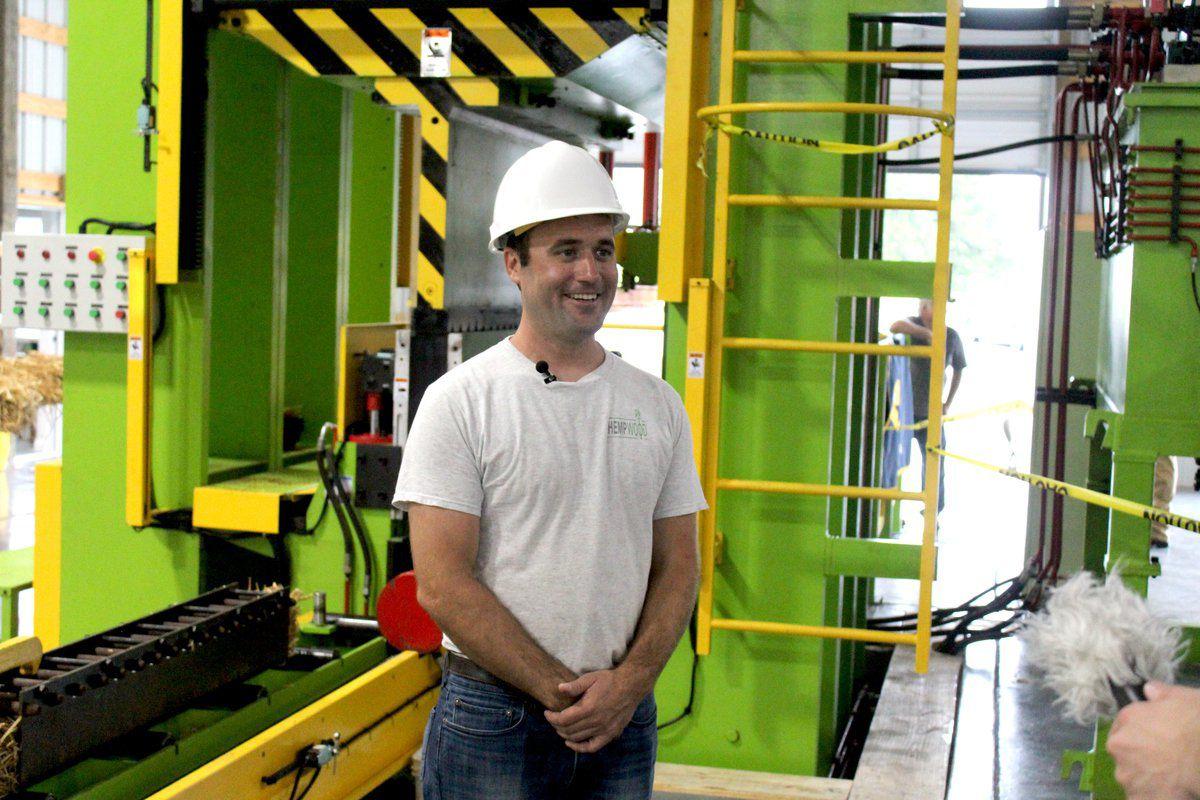 Greg Wilson (center) talks with attendees at the HempWood plant opening ceremony about the similarities between hemp wood and other woods on a display table, such as bamboo or smart oak, a eucalyptus-based product. According to hempwood.com, hemp wood can be used in every way that oak wood can and is 20 percent stronger.

MURRAY -- On Monday, a new business opened in Murray. It's the first-of-its-kind in the Kentucky, and in the nation.

Company leaders, along with local officials, celebrated as Fibonacci LLC opened their $5.8 million-plus HempWood manufacturing facility at 301 Rockwood Road, about 5 miles east of Murray off Ky. 94.

Following the project's announcement in March, Fibonacci leased a 16,500-square-foot facility for its automated HempWood manufacturing operation. The plant will produce sustainable wood made from hemp fiber and soy-based adhesives.

On Monday, the company's founder and CEO, Greg Wilson, said the wood made from hemp can be used in the same way that oak wood is used. The company website, hempwood.com, claims hemp wood is more eco-friendly, as there is no deforestation involved, and is 20 percent stronger than oak.

"We're taking the plant fiber - or the stalks from a hemp plant after people have already utilized the top of the plant - and then, we are converting that using a bio-based adhesive into a wood composite," he said. "We're taking something that grows in six months and we're able to replicate or outperform a tropical hardwood that grows in 200 years.

"About 60 percent (of the wood) ends up in flooring. About 20 percent ends up in furniture and cabinetry and things like that, and then about 20 percent goes to other products, like home woods or hobby wood - picture frames, cutting boards, skateboards, those kinds of things."

The hemp fiber being used comes from local farms, all within a 100-mile radius of the plant, with some coming from Oak Grove farms in Christian County.

"Murray is the epicenter for agricultural hemp in the United States," he said. "We've been working with Murray State University and Oregon State University to make this project make sense."

Wilson said running an agricultural hemp use business on a national or state level requires a license from the Kentucky Department of Agriculture.

"This license historically requires that we do a pilot program where we partner up with a university," he said. "I gave (Tony) Brennon (the dean of the Hutson School of Agriculture at MSU) a call three or four years ago and told him what my intentions were, and he said, 'Come on down. Let's figure it out.'

"So, we've been using the agricultural hemp grown on the Murray State campus as well as being introduced to Murray State University alumni, who are growing it on a large scale, to be able to get the raw material we need."

Wilson said the Murray plant would use over $1 million a year in raw materials and have more than a $1 million annual local labor impact.

"Each one of these presses will have 12 people working on it, plus three management positions per shift per press," he said. "Our plan is to eventually move into the building that's being built right next door so we can have two pressing operations going, hopefully turning into two shifts per press, which means having a maximum impact approaching the 50 employee mark."

Wilson added, for former Briggs & Stratton employees who may want to work at HempWood, the commute is just a few miles farther. Briggs & Stratton announced on Aug. 15 it was closing its Murray plant by fall 2020, putting 600 people out of work.

"On the heels of the recent plant closure, it is wonderful to see this announcement," Rogers said. "This product is innovative, sustainable and should have good prospects for growth. We are proud to have them in our area."

Wilson said HempWood is seeking workers, especially those with manufacturing experience. Applicants should send an email to work@hempwood.com.

"We already have eight people working here," he said. "We're hiring two people per month until the end of the year, and then, we'll reassess."

Calloway Judge-Executive Kenny Imes and all of the county's magistrates were in attendance for the ceremony, as were U.S. Rep. James Comer and state Rep. Richard Heath.

"I am always proud of projects that take advantage of our natural resources and provide good opportunities for our farmers," Imes said. "Working with Murray State and our other partners makes me confident that this and other hemp-related companies will do well in Calloway County."