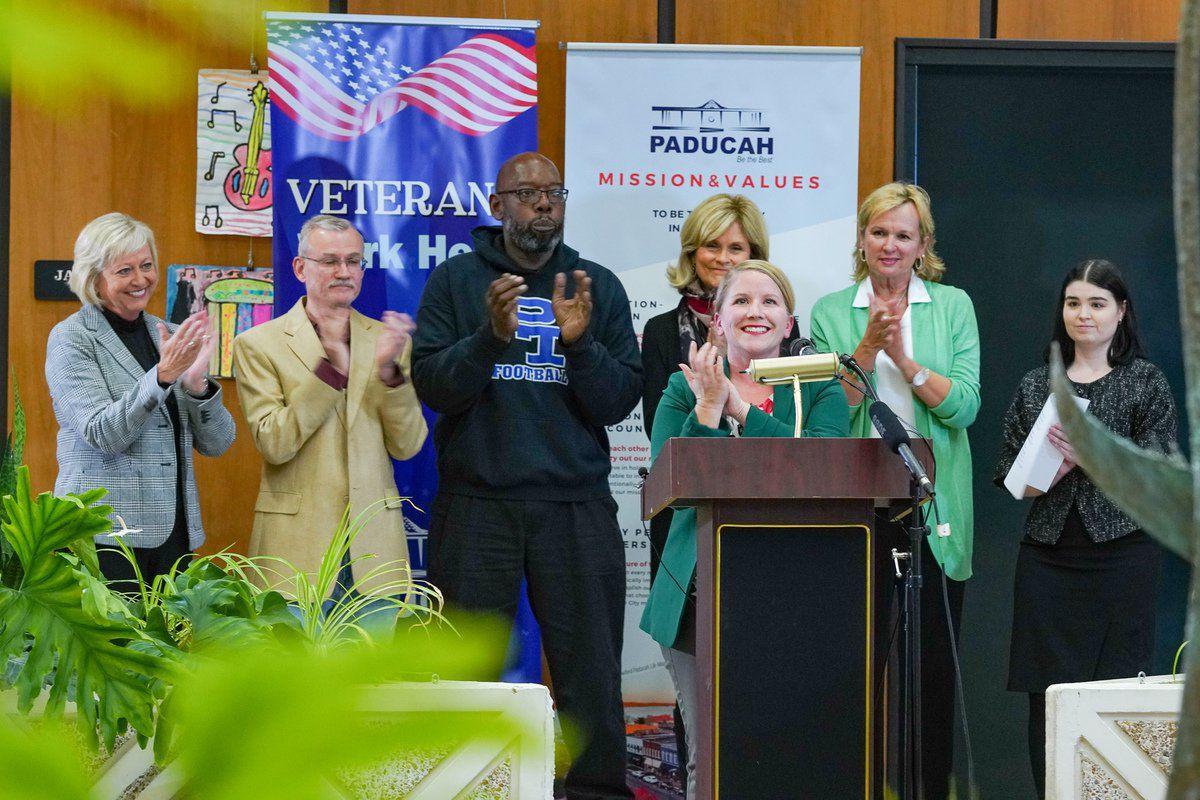 Paducah Mayor Brandi Harless (at podium) speaks at a press conference Wednesday at City Hall to celebrate a $10.4 million BUILD grant awarded to the city by the U.S. Department of Transportation for the Paducah Riverfront Infrastructure Improvement Project.

Paducah Mayor Brandi Harless (at podium) speaks at a press conference Wednesday at City Hall to celebrate a $10.4 million BUILD grant awarded to the city by the U.S. Department of Transportation for the Paducah Riverfront Infrastructure Improvement Project.

A press conference at Paducah City Hall on Wednesday afternoon celebrated the announcement that the U.S. Department of Transportation would be awarding $10.4 million toward the Paducah Riverfront Infrastructure Improvement Project.

The funds come through a DOT program known as the Better Utilizing Investments to Leverage Development (BUILD) grant, which the city applied for jointly with the Paducah-McCracken County Riverport Authority in July.

"What a big deal for our community," Paducah Mayor Brandi Harless said. "This investment in our riverfront will allow us to finish out the Riverfront Commons area, maximizing the connections between the convention center and downtown, provide a multi-modal experience for our visitors and our citizens, improve accessibility for our residents with disabilities, improve security on our riverfront, add Wi-Fi and broadband capabilities, add bus terminals and bike rentals and develop a steamboat excursion pier and plaza for the many riverboats who come to visit our city."

Harless thanked Senate Majority Leader Mitch McConnell and Department of Transportation Secretary Elaine Chao for their continued support of development in Paducah. The mayor went on to thank a litany of local elected officials, both past and present, who "kept pushing this ball down the court. We are proud to be making a slam dunk and finish what you started."

A release from McConnell, who contacted the assistant secretary at DOT in support of the project's application, preceded the press conference.

"The Paducah community continues to tap into its beautiful geography at the heart of our nation's inland waterways network," McConnell said. "With this BUILD grant, Paducah can continue creating new opportunities for tourism, recreation and commerce along the riverfront in support of good jobs and economic growth."

The initial proposal was comprised of two components, a Riverfront Commons -- increasing accessibility and safety in the area while adding an excursion pier, plaza, transient dock landing and improvements to the roads and paths -- and continued development of the riverport with the construction of a container transfer yard, which would allow the local riverport authority to handle general and containerized cargo. Only the Riverfront Commons portion received funding.

Because the riverport development portion did not move forward, the estimated project cost dropped from $16.8 million to $11.5 million. The city will be adding $1.1 million in matching funds from undesignated cash reserves to complete the project. Arndt estimates that the project could be complete in two years time.

Harless pointed out that this isn't the only development project in progress along the Ohio River.

"Between this project, the TIF (Tax Infrastructure Finance) district and the opportunity zone designation, our riverfront and downtown have a very bright future ahead of us," she explained.

The TIF project, which diverts state tax dollars for use in local development, would see the development of a new downtown hotel, additional off-street parking, public open space, as well as mixed-use residential and commercial buildings.

Opportunity Zones, a project that came as a result of 2017 federal tax legislation, allow local and national investors to receive capital gains tax benefits by investing in one of the 28 zones in Kentucky, two of which are in downtown Paducah.

Continuing to push the development of the riverfront area, Harless added, is of paramount importance when it comes to preserving the culture of our community.

"That river is what made us a city, and our downtown is what makes us unique," she said. "It's the beginnings of our existence here, and it deserves to be honored and for us to take full advantage of its potential."