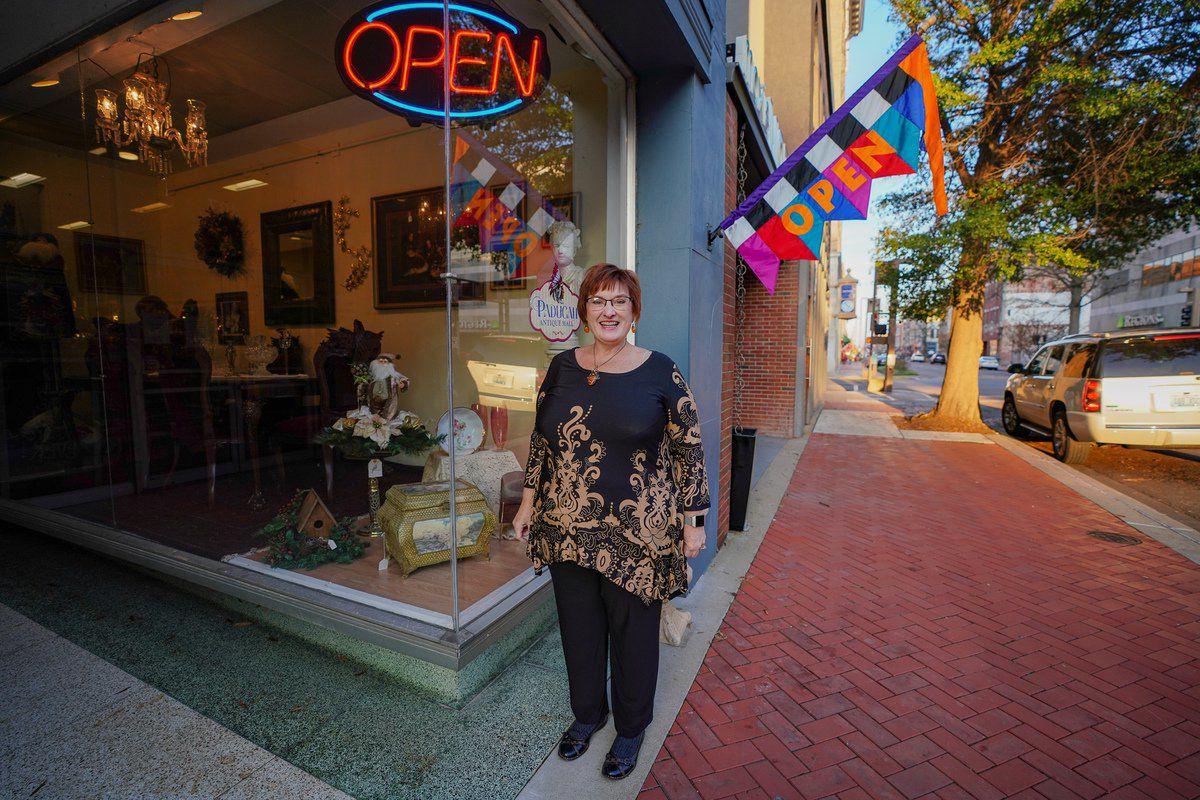 Rebecca Ausbrooks stands outside of Paducah Antique Mall at 407 Broadway Saturday afternoon just before the Christmas Parade begins. As owner of the antique mall, Ausbrooks believes parking will be an issue if the City Block project goes as planned and said she would prefer an alternate site. 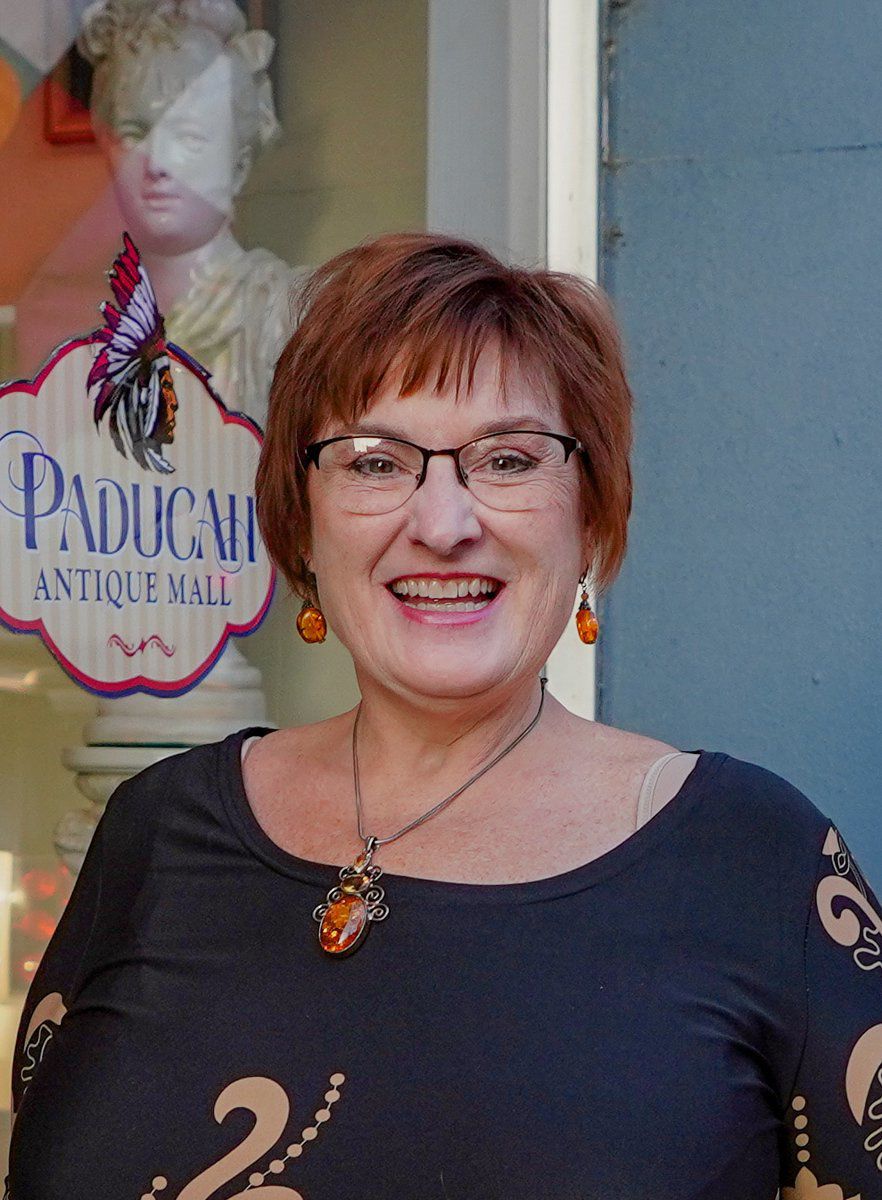 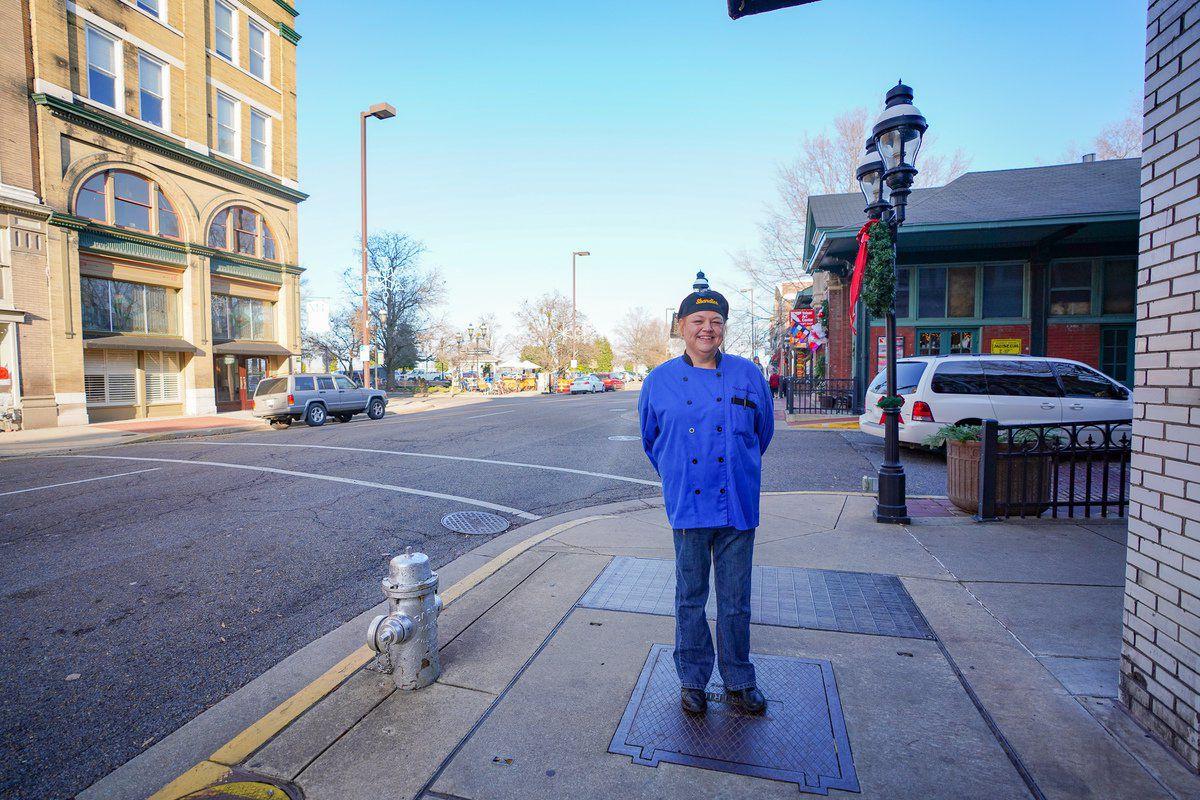 Shandie's co-owner Karla Lawrence stands on the corner of Broadway and Second streets across the way from the proposed site for the new City Block development project that would include a boutique hotel, mixed-use residential and commercial space, public parking and green space. Lawrence thinks the project can help revitalize downtown.

Rebecca Ausbrooks stands outside of Paducah Antique Mall at 407 Broadway Saturday afternoon just before the Christmas Parade begins. As owner of the antique mall, Ausbrooks believes parking will be an issue if the City Block project goes as planned and said she would prefer an alternate site.

Shandie's co-owner Karla Lawrence stands on the corner of Broadway and Second streets across the way from the proposed site for the new City Block development project that would include a boutique hotel, mixed-use residential and commercial space, public parking and green space. Lawrence thinks the project can help revitalize downtown.

Some local business owners generally agree with the city of Paducah's plan to bring a new boutique hotel to downtown, but the common ground diverges on where it should go.

Paducah officials are proceeding with plans to spur downtown development with the City Block project, which would include a boutique hotel, mixed-use residential and commercial space, public parking and green space in the city-owned parking lot at Second and Broadway.

The city parking lot is visible to patrons at Shandies Restaurant at 202 Broadway.

"I think it's a wonderful idea," Shandies co-owner Karla Lawrence said. "They've tried to revitalize this area for quite some time, and I think we're just kind of at a stalemate. It's a good idea for the progression of downtown. It would be awesome for business."

A chief concern raised among City Block opponents is parking. Lawrence said she's not concerned about parking overall, as long as there's a plan to accommodate parking for the disabled.

"They're not taking up the whole parking lot," she said. "People will ask, 'What are you going to do when the lot is full of parking for the hotel?' That means people are going to walk over here to eat. That's great."

While there are several other options for hotel rooms in Paducah, another downtown hotel would help attract national convention business, Lawrence said.

She said at conventions she attends, any time a potential new site is considered, easy access to hotels is a factor.

"That's why some of the bigger ones (conventions) wouldn't come down here."

Rebecca Ausbrooks is the owner of the Paducah Antique Mall, 407 Broadway. She has attended meetings of downtown business owners to get information on the City Block project.

Ausbrooks believes parking will be a big issue.

"People have always parked in that lot, it's like the center for activities," she said. "It does have such an energy, and people associate it with positive gatherings."

She expressed concern about not only visitors who come downtown, but local residents who regularly park there while patronizing local businesses.

Ausbrooks said the city needs to consider other possible locations that were included in the hotel study the city had commissioned. One of those locations, referred to as the site of a former nursing home, could help build up convention business, she said.

"There's lots of other areas if you're going to consider private property that some people might be willing to sell," she said.

Ausbrooks has been participating in an effort to gather signatures on a petition in opposition to the project.

"People might say we're against the development," she said. "No, we just don't think that's the right location."

Todd Blume is the owner of Paducah Beer Werks, 301 N. Fourth St. Count him among the City Block supporters.

"I'm for it for more than one reason," he said. "Yes, it will help me. I'm not directly downtown, but I get people walking from the Holiday Inn. They enjoy a beer and then they'll walk downtown.

"Having two (hotel) locations, another development downtown, is only going to create more foot traffic between myself, downtown, the convention center and Lower Town."

However, there is a "bigger picture" to consider, Blume said.

"Paducah is creating a better quality of life. We're doing the Greenway Trail, bike lanes, transient boat dock. All these things play into a much bigger picture. If Paducah has all these amenities, like the new aquatic center, that attracts bigger companies here," he said.

"I'm for Paducah. I believe in this town."

Bill Ford, a local business owner and artist, shares a passion for Paducah, if not the proposed location for the boutique hotel.

"I love Paducah and I just want things to go right for us," he said. "I just don't think it's a good decision. I'm not against a hotel, I think it's just going in the wrong spot. We need that parking lot. I was downtown the other day and it was almost half full ... and that was 2 o'clock in the afternoon."

Having a new restaurant in the former Whaler's Catch location also will increase the need for parking, he said.

He also expressed concern about the development impairing the view of the city's floodwalls, which he calls "a major focal point of our downtown area."

He, too, suggested having another hotel closer to the convention center would be beneficial and would complement the existing hotel.

He stressed, "I'm not resentful toward anybody. It's a free country and we can express our opinions. I have friends who are actually for it, and it hasn't affected our friendship."