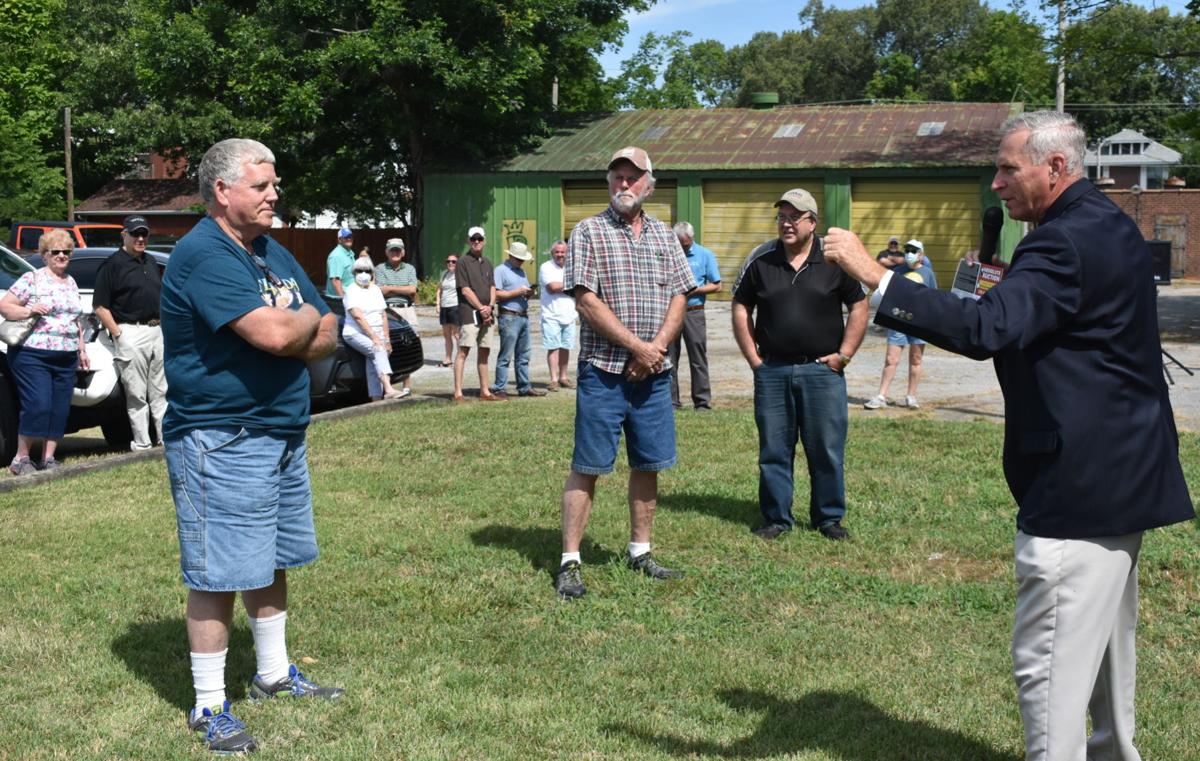 Auctioneer Chris Colson (right) conducts a bidding process Thursday, as Michael Conley (left) and others look on outside the historic Katterjohn building on Broadway in Paducah. Conley, who lives in Calloway County, made the top bid of $9,200. Conley said the building’s history sparked his interest. 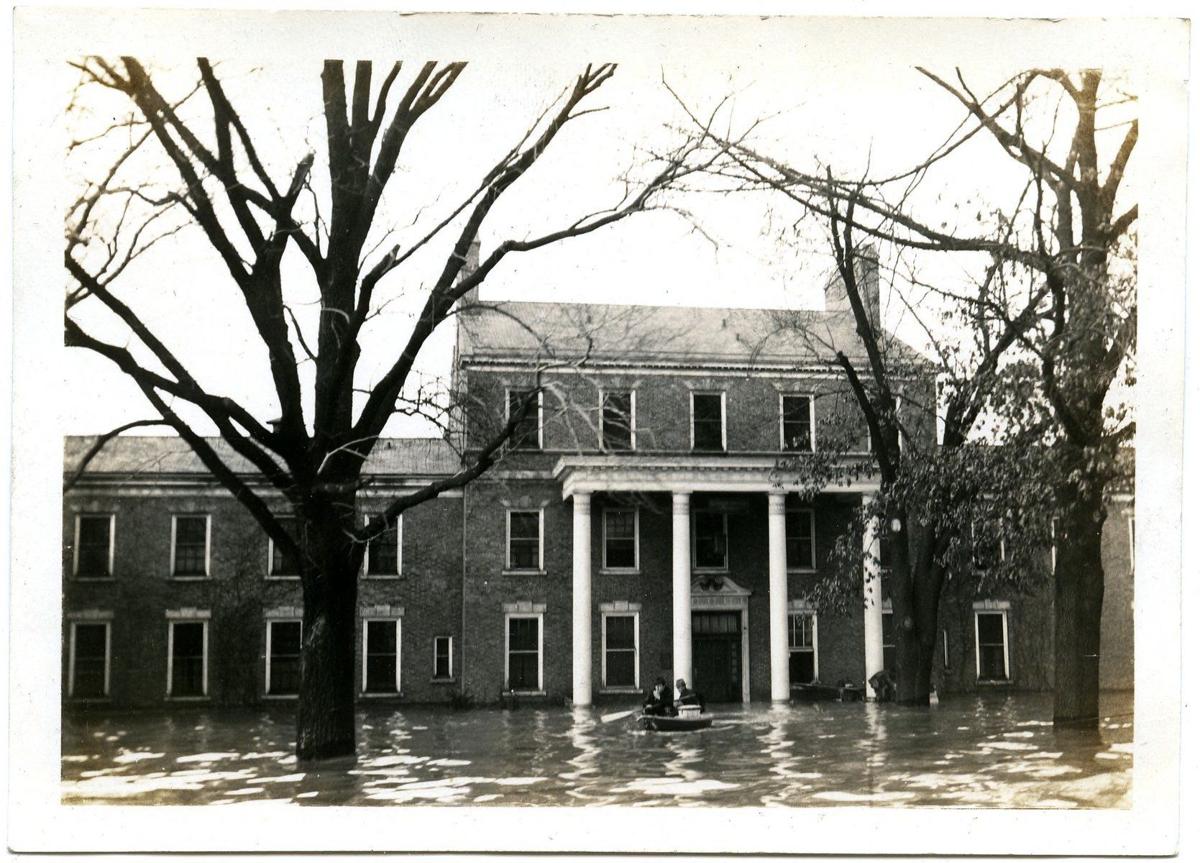 The historic Katterjohn building, as depicted in this photo from the 1937 Paducah flood, sold at auction Thursday morning with a top bid of $9,200 from Calloway County resident Michael Conley. It’s a former Illinois Central Railroad hospital that was purchased by George Katterjohn during the 1950s. The now dilapidated building once held offices and other spaces, but fell vacant in the early 2000s.

Auctioneer Chris Colson (right) conducts a bidding process Thursday, as Michael Conley (left) and others look on outside the historic Katterjohn building on Broadway in Paducah. Conley, who lives in Calloway County, made the top bid of $9,200. Conley said the building’s history sparked his interest.

The historic Katterjohn building, as depicted in this photo from the 1937 Paducah flood, sold at auction Thursday morning with a top bid of $9,200 from Calloway County resident Michael Conley. It’s a former Illinois Central Railroad hospital that was purchased by George Katterjohn during the 1950s. The now dilapidated building once held offices and other spaces, but fell vacant in the early 2000s.

Paducah’s dilapidated Katterjohn building has stood on Broadway for about 100 years, and its next chapter might’ve been decided at auction Thursday.

New Concord resident Michael Conley made the highest bid for the large historic property, in a roughly 11-minute bidding process by local auctioneer Chris Colson. His winning bid was $9,200, meaning the actual contract price is $10,120 after a 10% buyer premium.

“A lot of people here, and people that aren’t here, have a lot of sentimental and emotional attachment to this property, even myself,” Colson told the crowd.

“I used to come here and do business with people that were renting and leasing inside this building in the late ’80s and early ’90s, so I’ve been here myself. A lot of people have been interested, wanting to walk through it. It is what it is. Everybody’s seen it.”

The first bid was $1. It lulled for a bit at $2, but steadily increased and ultimately landed at $9,200 after different bidders jumped in. The crowd applauded Conley after it ended.

“I’m going to explore the possibilities to see if there’s any grant money out there to refurbish it,” Conley told The Sun.

“If not, it’ll have to come down and just use the lot for the highest and best purpose that we can get out of it. … I’ll look into salvaging the brick and different things out of it.”

The Katterjohn building, 1501 Broadway, rests on about 3.18 acres and has approximately 29,315 square feet on the three main floors, according to Colson’s website. Its history stretches back to the late 1880s, when railroad magnate Collis P. Huntington established a hospital for railroad employees in a frame building.

The former Illinois Central Railroad hospital later burned in 1917, was rebuilt in the same area and then reopened in 1919. George Katterjohn bought the hospital in 1957, which held offices and other spaces. Tenants eventually left in the early 2000s.

Conley, who’s retired from the military, said the history sparked his interest when he read about it in an advertisement. He also has a background in the auction and real estate business.

He describes the Katterjohn building as being in “pretty poor shape” and having storm damage. He plans to take a month or two to sort things out, make plans and see what they’re going to do with it, but doesn’t know the cost to renovate.

“I would just be guessing,” he said.

“I told someone a while ago, if a person was to go through this building from one end to the other … a million and a half dollars might not even cover it,” he said. “And it may cost half that much just to tear it down. I don’t know. A lot of unknowns.”

Conley said he was excited about getting the top bid, but pointed out there’s always that “lump in your throat,” and “Did I do the right thing?”

“It’s like any other investment. I may flip it and turn it over to somebody else, if somebody comes along with more money than I’ve got to spend on it,” he said.

Approximately 80 people attended the auction and several of them said curiosity was their reason for going. The crowd featured all ages and included former Paducah Main Street director Melinda Winchester, who has experience with historic preservation.

“I think it’s a great piece of Paducah’s history, so I hope whoever gets it here today will actually do a rehabilitation on it,” she said, before the auction. “It’s got really great bones. I hope they have the vision to see that, and I’m happy to help with tax credits if they need it.”

As for what’s next, Colson said the buyer has 45 days or less to close on the Katterjohn building. It’s been owned by Paducah Historical Properties, LLC, which bought it at auction for $253,500 in 2002. The group hired Colson in May.

Attorney Bobby Miller, a member of the group, explained in previous interviews that many have looked at the Katterjohn building over the years, trying to make it work from an economic standpoint. It’d take a significant amount of money to renovate due to its current state, and demolition would be costly.

“We’re pleased that someone has purchased the building, and hopefully they will have a game plan to do something with it (that will) be productive for the community as a whole,” Miller said.