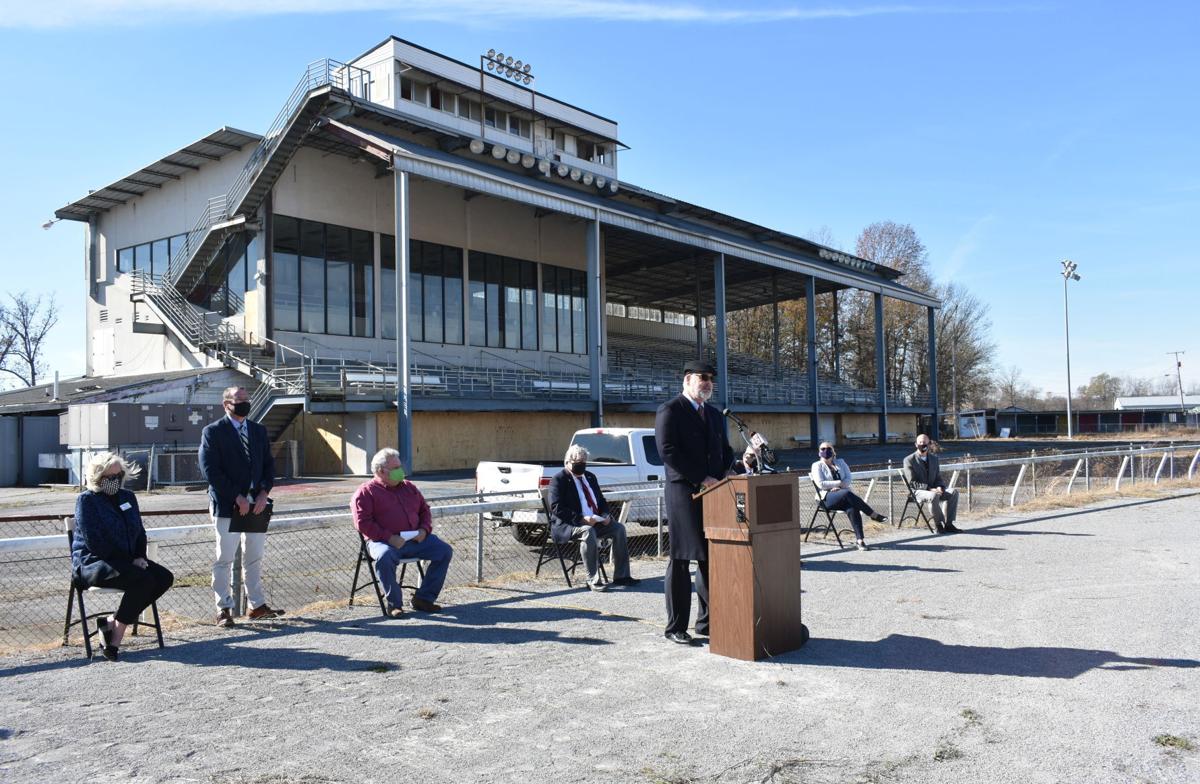 McCracken County Judge-Executive Craig Clymer (at podium) discusses a major announcement Thursday at Bluegrass Downs in Paducah, which involved the county receiving a donation of 50-plus acres from VICI Properties Inc. In addition, the county plans to lease approximately 10 acres. The site will be used for a recreational sports complex. 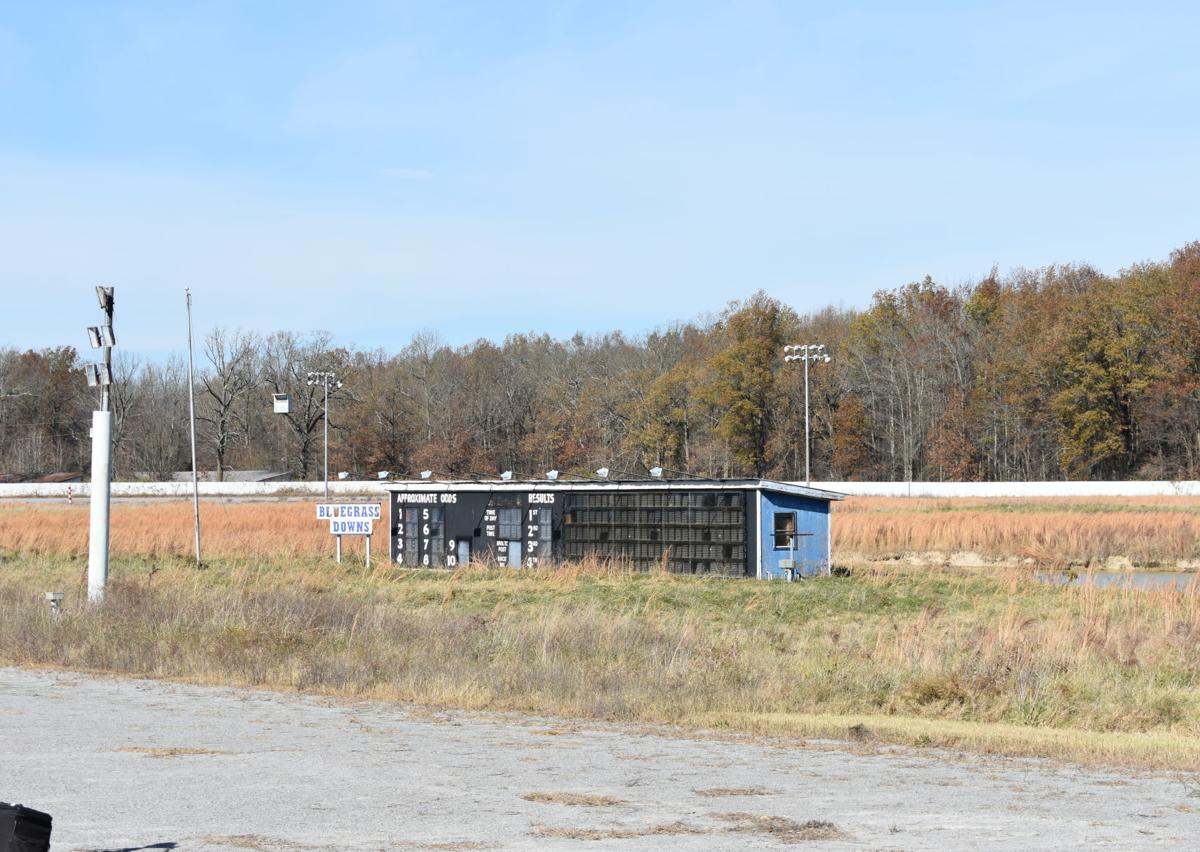 Bluegrass Downs, a longtime horse racing track in Paducah, will be used as the site of a future recreational sports complex. It ceased operations in fall 2019. VICI Properties Inc. is donating more than 50 acres of land to the county.

McCracken County Judge-Executive Craig Clymer (at podium) discusses a major announcement Thursday at Bluegrass Downs in Paducah, which involved the county receiving a donation of 50-plus acres from VICI Properties Inc. In addition, the county plans to lease approximately 10 acres. The site will be used for a recreational sports complex.

Bluegrass Downs, a longtime horse racing track in Paducah, will be used as the site of a future recreational sports complex. It ceased operations in fall 2019. VICI Properties Inc. is donating more than 50 acres of land to the county.

McCracken County sports tourism and facilities got a major boost Thursday, as local officials announced the donation of over 50 acres to the county for a future recreational sports complex.

The sports complex’s planned site is a familiar location for residents — Paducah’s Bluegrass Downs — where horses raced for decades off Park Avenue, before the track ceased operations in fall 2019. New York-based VICI Properties Inc. agreed to give nearly 58 acres of land to the county, through one of its wholly owned subsidiaries, according to a news release.

“It’s a property that’s valued at approximately $1.4 million dollars and we also will be assuming a couple of leases for approximately 10 more acres thereabouts, so it will be a large facility here that will accommodate our needs well into the future for soccer, baseball, softball.”

Clymer called it a “monumental achievement” that the county was able to get the property at no cost and recounted efforts to get it.

“Almost two years ago, when I took this office, one of my top priorities was sports facilities for our children here locally. Particularly, getting our some 1,200 children that play soccer in McCracken County a nice, quality place to play soccer, and baseball/softball as well,” he said.

“I wanted to get them off of the landfill and into a nice facility.”

Fast forwarding to Sept. 29, 2019, Clymer said he learned of Bluegrass Downs’ closure and got on the phone the next day to track down the person who “makes the decision” on what happens to the property.

He reached out to Sherry Wessel, senior vice president and general manager at Harrah’s Metropolis in Illinois, who put him in contact with VICI Properties officials, according to the county. He shared the sports vision for the site and VICI Properties expressed a “strong interest” in making the donation to benefit local youth. VICI is one of the country’s largest owners of gaming, hospitality and entertainment destinations.

Griffith, who served as a representative from Harrah’s, told attendees that it’s sorry to see the race track close last fall, but it’s “really excited” about the project. He paid tribute to Bluegrass Downs’ past and longtime manager, Jerry Bradley, who died in June. The track first opened in 1984.

“A lot of people came through there and made this property what it is, but the most important person, I think, that kept the property going was Jerry Bradley,” he said. “Jerry Bradley was here until the end in October (2019) and then sadly, he passed away this year, so we pay our respects to Jerry.”

In September, officials held a ribbon-cutting at the Bill and Meredith Schroeder Expo Center for multi-purpose sports courts that are expected to enhance basketball and volleyball tournament opportunities. That came after the creation of the McCracken County Sports Tourism Commission and its work.

The commission formed last year after an interlocal agreement was done, which involved the city and county. In her remarks, Harless cited the five-party interlocal agreement, which said they’re on the “same team.” Officials had gathered on the McCracken County Courthouse lawn in August 2019 to mark the occasion.

Bluegrass Downs, which is located at 150 Downs Drive, is an ideal spot to Clymer, who pointed out its proximity to the Greenway Trail, Noble Park, major roadways, as well as its existing traffic light and the grandstand for spectators, which will be a “gem.”

”It’s another step in the county pushing forward with sports. Indoor has already been set up at the convention center for basketball and volleyball and now the baseball, softball, soccer here. We have worked with the city on so many projects. We will be talking with the city, in hopes that they will be interested in going forward as partners on this, sharing ideas of what they believe would benefit our community.”

In a statement read by Ervin, Paducah Mayor-Elect George Bray voiced his excitement and support for the sports complex project.

“Like so many residents, I feel this is a project that will have the greatest impact on the quality of life for area families and will also serve to help those facets of our community that are part of the hospitality and tourism industries,” Bray stated.

“I am supportive of this endeavor and the city will seek to be a good partner with the county to make this project become a reality. I look forward to working with Judge-Executive Clymer and the county commissioners.”

As for Fiscal Court members, Jones called it a “tremendous gift” for the community and praised Clymer’s efforts in pursuing it.

Meanwhile, Parker charged his fellow officials to make the sports complex happen and praised Jones for his efforts. He added that it was Jones’ ”brainchild” to form the sports tourism commission.

Bartleman described it as a great day for Paducah and McCracken County, as he said providing first-class athletic facilities and fields has been a top priority for generations. He noted it’s going to take continued ingenuity, hard work, team work, tough financial decisions and time.

”This donation is the rocket ship that will take us to the moon,” he said.

The exact cost for the sports complex project is not known yet, as Clymer confirmed to The Sun, but he noted funding sources in the transient room tax, potential donations and naming rights.

He explained that it has to figure out what’s on the “wish list,” meaning what does it want and what can it afford. He also cited there is a certain amount of fields and amenities that are needed to attract tournaments.