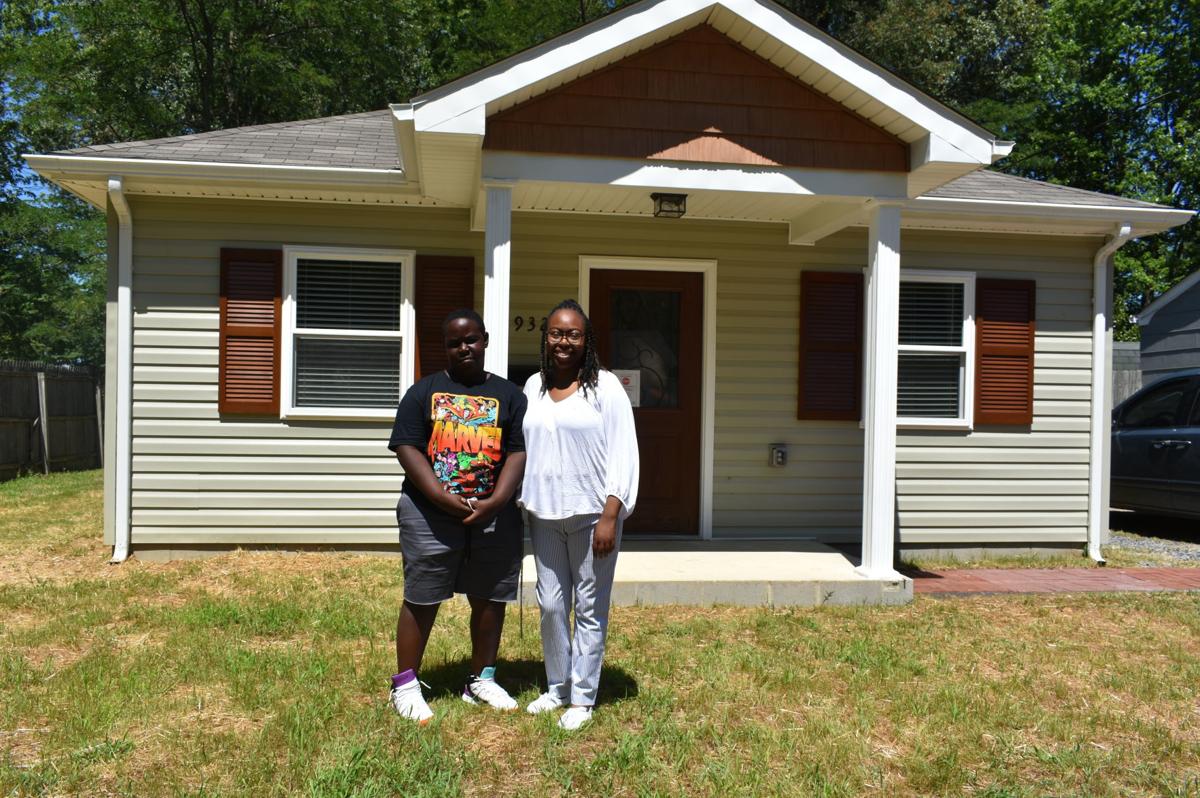 Paducah resident Phaith Crider and her 11-year-old son, Aiden, celebrated their home’s dedication Friday afternoon at 932 River Oaks Blvd. It marks home No. 73 for Paducah-McCracken County Habitat for Humanity, which was funded by a donation from Leadership Paducah Class No. 32. 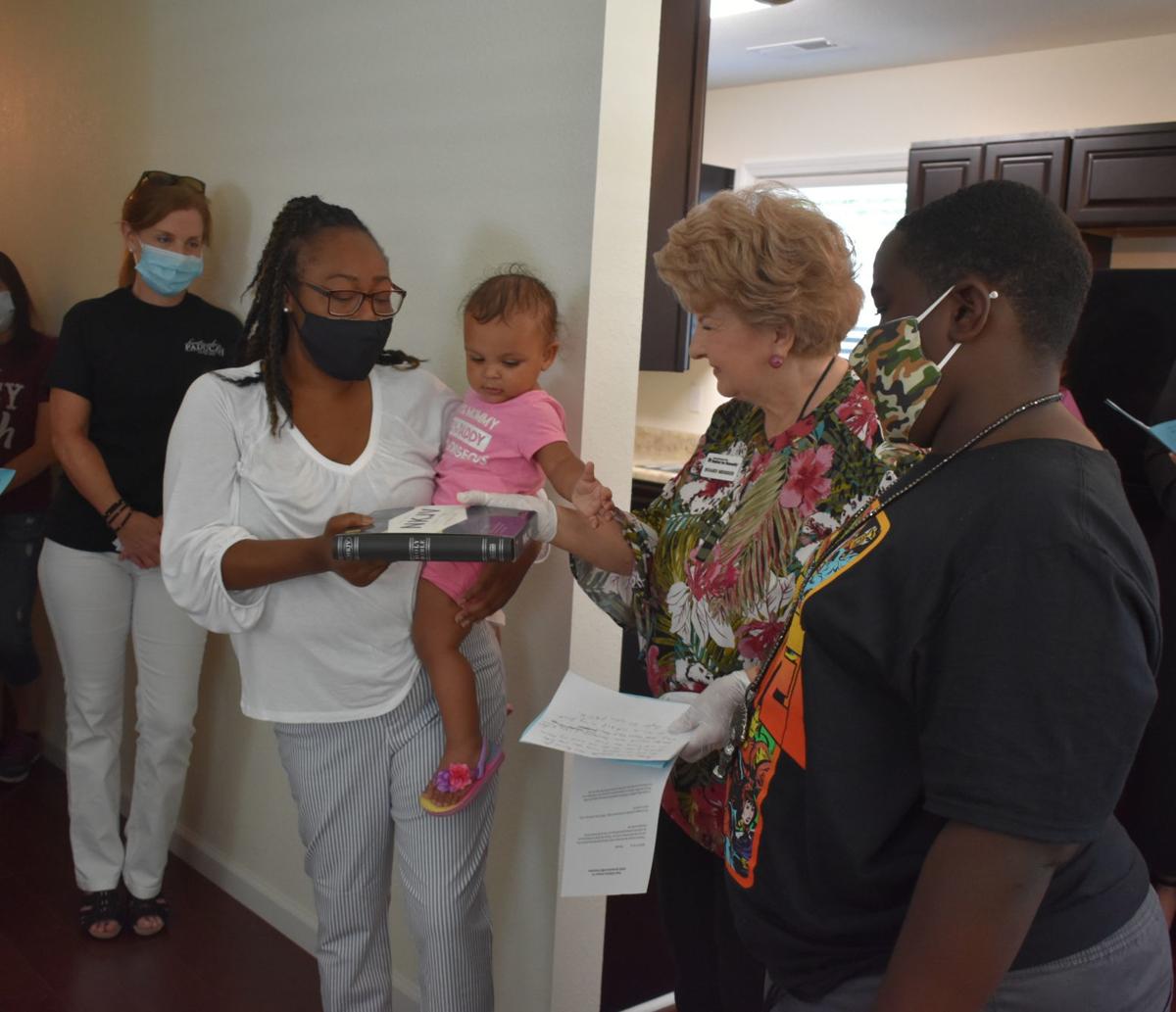 Paducah resident Phaith Crider and her 11-year-old son, Aiden, celebrated their home’s dedication Friday afternoon at 932 River Oaks Blvd. It marks home No. 73 for Paducah-McCracken County Habitat for Humanity, which was funded by a donation from Leadership Paducah Class No. 32.

It’s been exactly a year since Phaith Crider picked up a shovel to break ground on her home with Paducah-McCracken County Habitat for Humanity.

The once empty lot at 932 River Oaks Blvd. now has a brand new 1,115 square-foot house with fresh paint, shiny appliances and fixtures, sturdy walls and a world of potential. It’s all thanks to dedicated efforts by many people, including volunteers, contractors, Leadership Paducah Class No. 32, Habitat for Humanity and the homeowner.

“It’s what we think about and dream of when we’re little — having your own place and having children and getting married. Having a home is one step closer to almost any goal that I would have in life,” Crider told The Sun.

“This was one of my goals, so now it’s just like, ‘OK, we’ve got this.’ We’re here. It’s time to take a break or keep moving onto the next goal.”

Habitat for Humanity hosted a house dedication service Friday afternoon, where Crider and her 11-year-old son, Aiden, were joined by a supportive crowd to celebrate the moment with prayer, words of appreciation, scripture reading and the presentation of a Bible. Furniture is expected to arrive Saturday.

It’s a lengthy process filled with lots of work, such as required “sweat equity” — hours by the homeowner, such as painting the walls and other tasks.

Crider’s home marks No. 73 for the nonprofit.

It was funded by a $74,800 donation by Leadership Paducah Class No. 32, which also secured thousands of dollars of in-kind contributions from Ballard Plumbing Service, Beltline Electric and AirTite Insulation. There’s also money left over for Habitat home No. 74, which is planned for 2901 Virginia St., near Morgan Elementary.

“We are so honored to have participated in the Paducah (Area) Chamber of Commerce Leadership Paducah Class No. 32,” said Mary Katz, a representative for Class No. 32.

“To combine that with this Habitat project, it was pretty amazing. Our class had to choose from a variety of projects, but in the end, we really wanted something that would be hands on and that would be engaging long after the money was raised.”

Katz also told attendees the class wanted to choose a project with a “deep and lasting” impact for a family, noting the financial and emotional security that comes from being a homeowner.

After the dedication, many people took a tour during the open house and admired its different bathrooms, bedrooms and other spaces inside.

All the festivities aren’t a new experience for Brenda Langlois, executive director for Paducah-McCracken County Habitat for Humanity, but she’s excited just the same and looking ahead to the next one.

“It’s just amazing to think we stood here last year about this time (July 11), we stood on this vacant lot with our shovels.”

Langlois said it’s rewarding to watch every step of the way as the house gets built, where she sees the family’s involvement, the community’s support and others that help the nonprofit.

As for what’s next, Habitat for Humanity plans to reopen the family selection process again for home No. 74 next week. It’s still raising funds for the build and she hopes to start digging after Labor Day.

“We had that opened up the middle of February through the end of March and then COVID hit, so we suspended the process until further notice,” she said. “We’re planning on the 18th, next week, July 18 — starting the application process again, allowing people to turn in applications.”

Anyone interested in learning more can call 270-444-2060 or visit paducahhabitat.org.