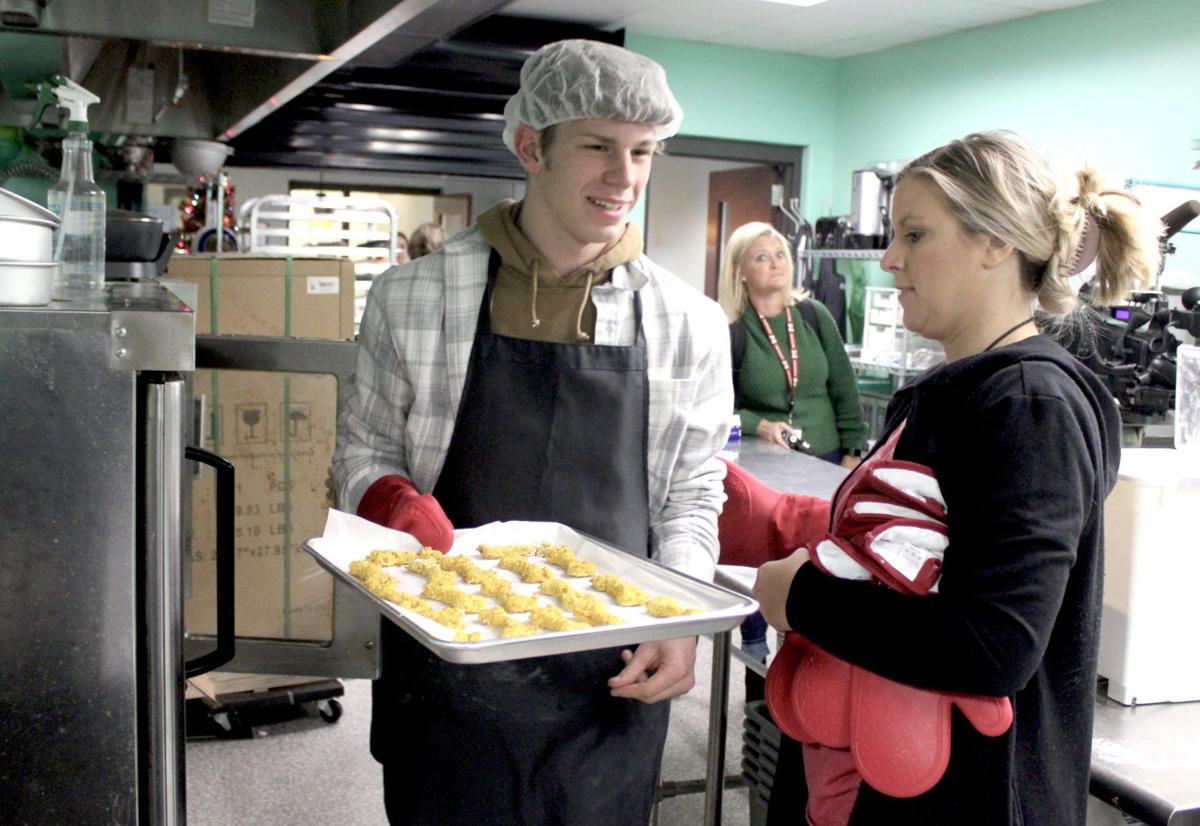 Trey Tucker walks past teacher Kelsey Miller with a tray full of doggie treats whipped up Friday by the McCracken County High School FCCLA Club for the Humane Society. 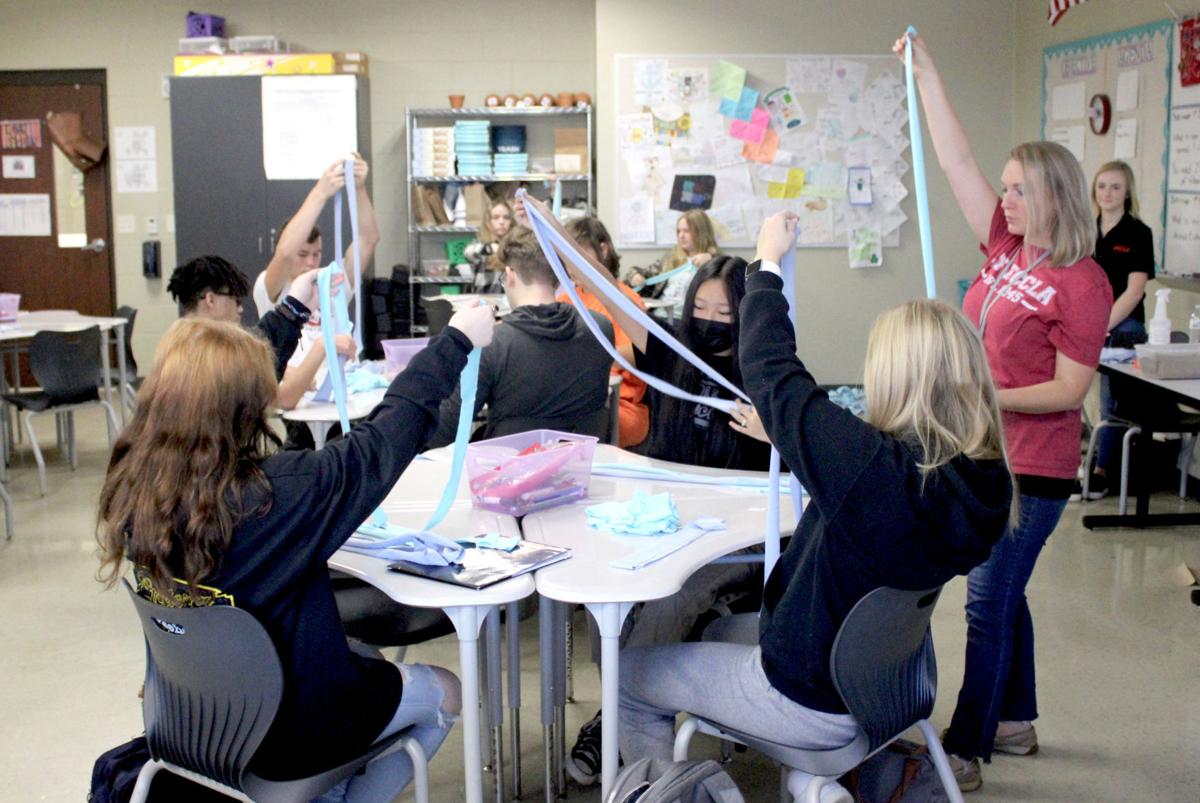 MCHS teacher Samantha Heath (standing at right) shows her class how to measure out fabric to make into a chew toy for dogs at the McCracken County Humane Society. The toys and student-made doggie treats were brought to the Humane Society on Tuesday. 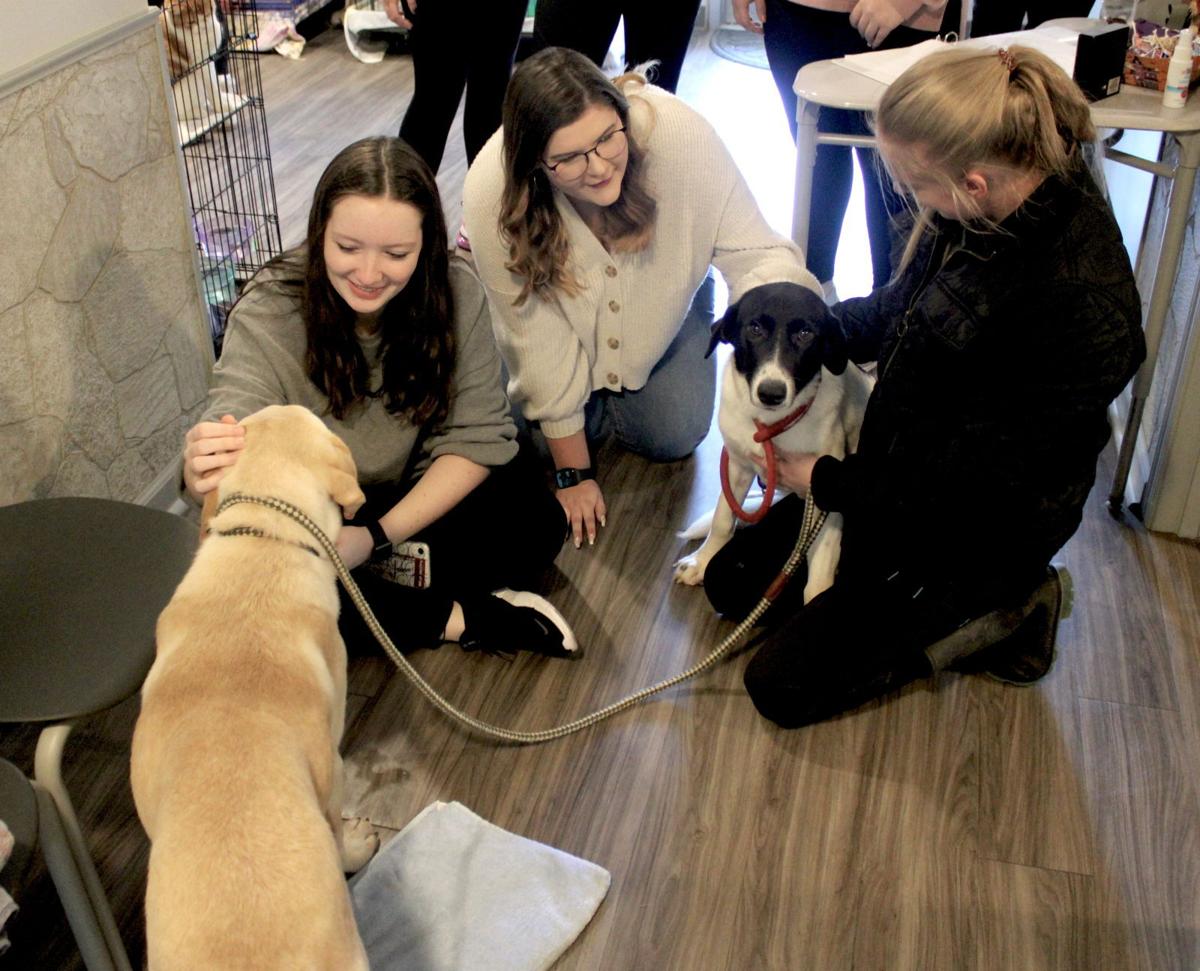 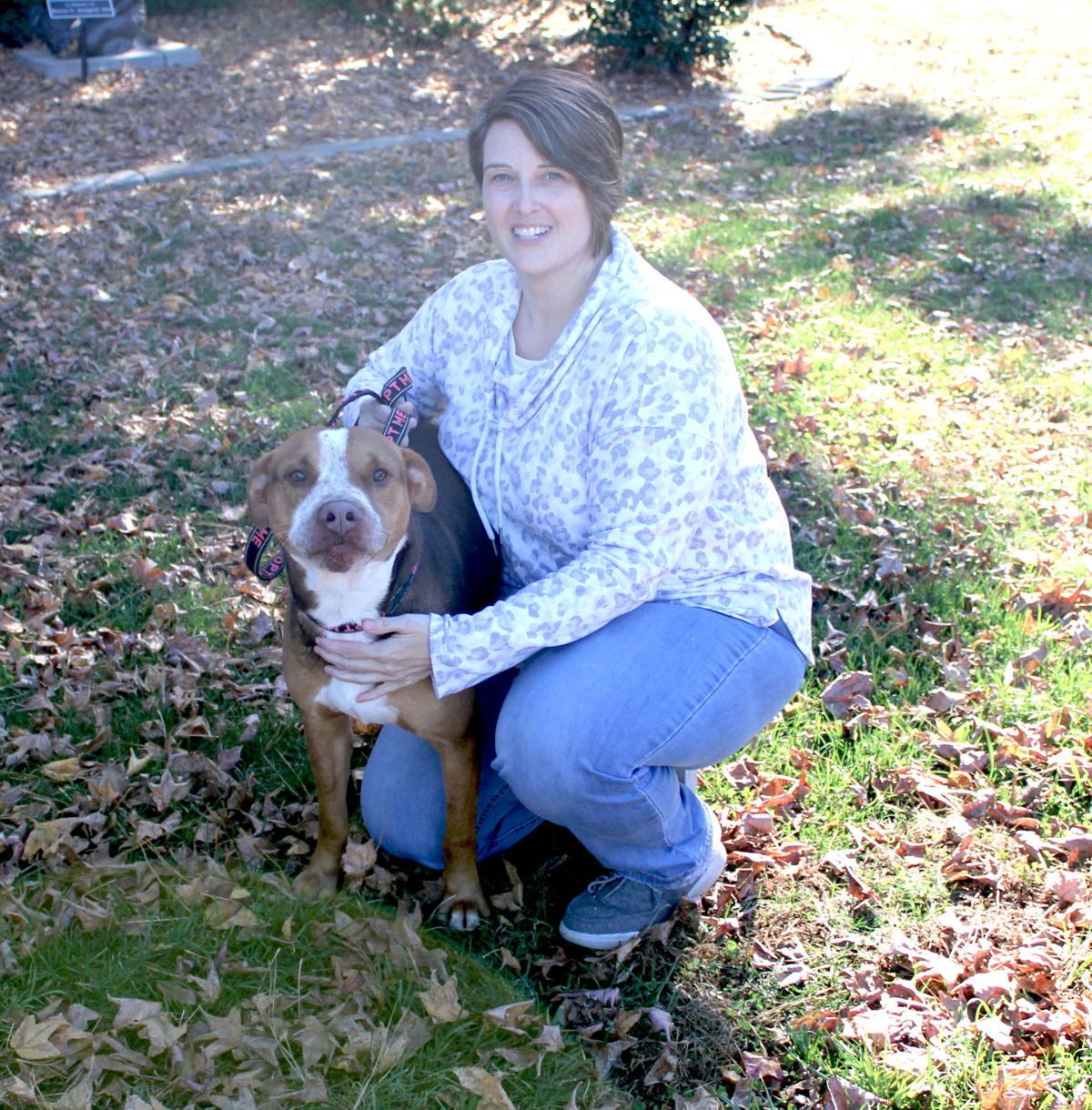 Traci Phelps, the executive director of the McCracken County Humane Society, poses with Murray, a terrier mix who will enjoy the student-made doggie treats and chew toys brought to the Humane Society on Tuesday.

Thanksgiving is a time for being thankful for food that we have, whether it was bought at a grocery store, raised ourselves or provided through the grace of others.

The Family, Career and Community Leaders of America Club at McCracken County High School wanted to help the dogs at the McCracken County Humane Society have something to be thankful for, so its members cooked up batches of doggie treats and made chew toys for them.

About 400 students worked on the puppy projects in school on Friday and delivered the presents on Tuesday.

Lauren Williams, a family consumer sciences teacher and the school’s FCCLA adviser, said the idea to make doggie gifts was a part of the FCCLA Families First project.

“FCCLA has seven national programs, and we do one a month,” Williams said. “With National Family Week being (this week), we did Families First.

“We were trying to think of a project that we could do in class and have them do at home, so the students wanted to do something for their pets.”

“We get to incorporate our organization (FCCLA) into our classroom,” she said. “They get to get a little community service time and donate back to our community.”

“It is super-easy,” Miller said. “With foods and nutrition, we learn basic kitchen skills. This gets them in (the class kitchen) with something that is relatively easy and allows them to practice the skills that we teach in the classroom.”

While some students mixed the ingredients together, another group used a bone-shaped cookie cutter to shape the treats.

Other students put the treats into the oven to bake, then put a handful of treats into a plastic bag, and others were in charge of cleaning the kitchen and utensils after they were used.

“From start to finish, they are in charge,” Miller said. “Some people have little bitty dog bones, while others used a regular cookie cutter. They turned out pretty cute, just like little dog treats.”

Miller said that nearly 100 students from every food and nutrition class made the treats, totaling about 500 treats for the canine connoisseurs.

“(The students) love lab days,” she said. “That is what they look forward to with foods and nutrition. The classroom stuff is fun, but when they get to come in (the kitchen), they come out of their shell. They just love it, doing things hands-on.”

Students in Samantha Heath’s classes made chew toys for the dogs out of strips of material woven together like a rope. They made about 250 dog toys for the different sizes of dogs at the Humane Society.

Traci Phelps, the executive director of the McCracken County Humane Society, said this helps to fill needs there.

“Coming into colder weather, we always need blankets, sheets, towels, dog beds and cat beds, especially for the dogs, because they sleep on concrete floors,” she said. ”There is heat, but concrete floors get cold, and I wouldn’t want to sleep on a concrete floor.

“Everybody has a blanket, everybody gets a bed. This time of year is one of the biggest issues because we go through them pretty fast.”

“They get bored; they’re just like people,” she said. “If I sat in this room all day and only went out to play for a little while — they get limited time to just run and run, so we have to find a way to keep them engaged.”

Phelps said the thing that would most help the Humane Society would be pet adoptions.

“If people want to know, ‘How can I help? I’ve thought about getting a dog, but I don’t know’ — yes, get one,” she said. “We will introduce you to every dog in the facility until we find the right one for you.

“The only way that we make more space to take in (animals) from the public and to take in from animal control is to do adoptions.”

Phelps said the Humane Society commonly takes in medium- to large-sized dogs, so the need for beds is for that size of dog.

She said adoption should be a well-thought-out process instead of impulsively adopting an animal.

“We want it to be a good match for each family, not just ‘Come and get a dog,’ ” she said. “You need to think about what your lifestyle is like. Do you have time for a dog? When you go home, what do you like to do?

“People think, ‘What does that have to do with me adopting a dog?’ It has a lot to do, because if you like to go do marathons in your time off, but you want an animal, you want a dog that can run with you.”

Phelps said the staff works with the animals and even brings their own children to play with the dogs to help see which ones are good with children.