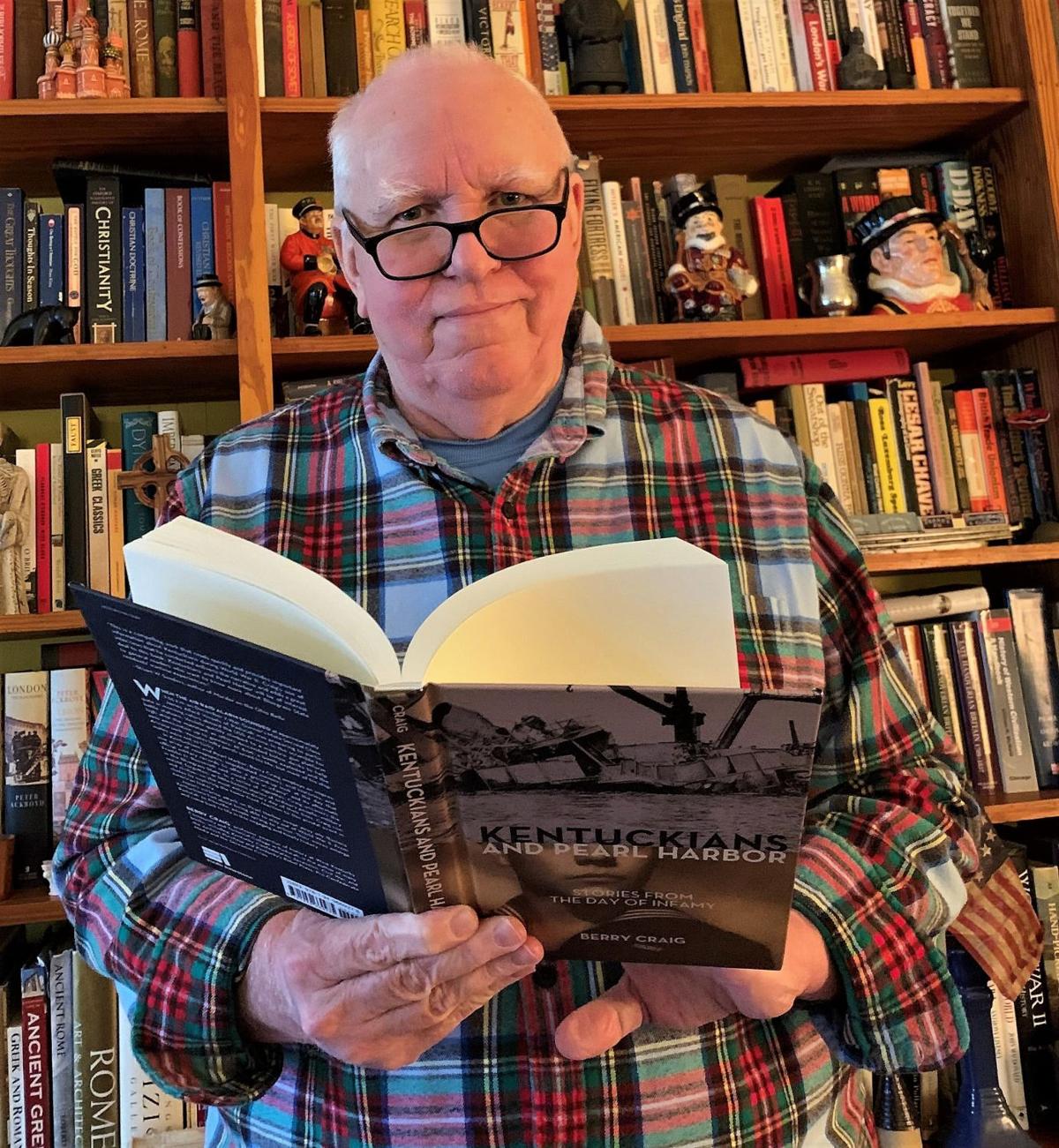 Mayfield historian and author Berry Craig has penned his seventh book, “Kentuckians and Pearl Harbor: Stories From the Day of Infamy,” from the University Press of Kentucky. It recalls stories from his personal interviews and outside research of those who survived the Dec. 7, 1941 attack on the U.S. and propelled the nation into World War II.

James Allard Vessels of Paducah was a survivor of the attack on Pearl Harbor. He was aboard the USS Arizona when it was destroyed. At his fiancee’s Fancy Farm home, she and their parents were listening to the radio and celebrating their engagement when news broke of the attack.

Mayfield historian and author Berry Craig has penned his seventh book, “Kentuckians and Pearl Harbor: Stories From the Day of Infamy,” from the University Press of Kentucky. It recalls stories from his personal interviews and outside research of those who survived the Dec. 7, 1941 attack on the U.S. and propelled the nation into World War II.

James Allard Vessels of Paducah was a survivor of the attack on Pearl Harbor. He was aboard the USS Arizona when it was destroyed. At his fiancee’s Fancy Farm home, she and their parents were listening to the radio and celebrating their engagement when news broke of the attack.

Like many of Berry Craig’s generation, he is well versed in the bravery of those who fought and served during World War II. Having been born on December 7 — albeit eight years after the attack on Pearl Harbor that threw the United States into war — created a deeper connection for him.

Along with being “a date which will live in infamy,” as then-President Franklin D. Roosevelt dubbed Dec. 7, 1941, Craig also knows the personal significance of it for his father’s sake.

Berry Craig Jr. was a high school senior in Knoxville, Tennessee. A baseball player, he had signed a minor league contract with the St. Louis Browns but the Japanese attack on Hawaii put that on hold.

“He joined the Navy and thought he was going to play service baseball, but the Navy had a different idea and they put him on a landing craft and sent him to the Pacific,” the son recalled.

Following the war, his father moved to Mayfield to play for its Kitty League baseball team and went to Murray State University on the GI Bill. Then that December date took another turn in the elder Craig’s life.

“December 7 is a rather remarkable date for me. It’s the postponement of one of my dad’s careers and ended another,” his son said. “I was born Dec. 7, 1949, and he quit college and never went back.”

That 1941 date didn’t just cause a ripple effect but a massive wave that propelled American from the Great Depression into more trying times but eventually established the country as a global military and economic superpower. Still, its effects were felt at home and touched the lives of many Kentuckians.

Those are the stories Craig, a former newspaper reporter, educator and author, collected during his lifetime and described in his latest book, “Kentuckians and Pearl Harbor: Stories from the Day of Infamy.” He said of the seven books he has written and two he has co-authored, this book was one he enjoyed researching and writing the most and is the most meaningful.

“I think part of this is I’m a (baby boomer) and it really means a lot to people of my generation,” he said.

The Stories of Infamy

The literary link to Dec. 7, 1941, and Pearl Harbor was forged during Craig’s days at Mayfield High School when he read Walter Lord’s 1957 book, “Day of Infamy.” Then in 1976 when Craig was a reporter for the former Paducah Sun-Democrat, he was given a list of Pearl Harbor survivors by Murray State history professor Dr. Jim Hammack.

“I started looking down that list to see how many were in our area and there was a remarkable number,” Craig said.

One of his first survivors he interviewed was the late James Allard Vessels of Paducah. Vessels was a gunner’s mate second class on the U.S.S. Arizona, which sank in Pearl Harbor with 1,102 of its 1,177 sailors still on board.

“This guy could remember in graphic detail the whole day: what time he got up, went to chow, playing a card game called Acey-Deucy,” Craig recalled.

According to his account, Vessels was 90 feet above the water atop the Arizona’s main mast when the bomb destroyed the ship. The blast tore off most of his clothing but left him unhurt, though he was shot somehow in his leg and had to dig the bullet out with his pocketknife.

Meanwhile back home in Kentucky, Vessels’ parents had taken a recently received package from Hawaii to the home of Anita Hodge, his fiancé. It was an engagement ring and wedding band.

After she tried her rings on, they all gathered around the radio to listen to music when news came of the attack. The Arizona was reported gone and no one knew Vessels’ fate until they received mail weeks later informing them he was alive.

Craig said the tales of not knowing if loved ones were alive or not were agonizing to imagine. He said some would get telegrams from the military weeks later saying their sons were killed, then only to receive a correction that they were in fact alive.

“You can imagine the horrifying roller coaster they went through,” he said. “Most of these telegrams arrived around Christmas so you can imagine this bleak, horrific, terrible Christmas that all of a sudden turns into a joyous occasion. A woman in Louisville got the first telegram and the second and she didn’t believe it until her son came home.”

Others he had interviewed or learned of over the course of his journalistic career included Joe Sanders, V.C. Kidd and Tommy Lewis and Luby Saxon, all of Mayfield and who had stories of their own experiences that day. Countless other stories were found through newspapers.com and other archives of soldiers, sailors, Marines, airmen and Coast Guard members from Kentucky who survived Pearl Harbor and then went on to fight throughout the war.

“For a lot of these guys,” Craig noted, “Pearl Harbor was just the opening of (fighting in the war).”

The Impact of Infamy

The process of writing the book (which is available through kentuckypress.com) spanned 44 years from that first interview to the idea in 2018 to visiting Pearl Harbor and seeing remnants of bullet holes and explosions to the final printed product. Craig said he hopes the book will honor the lives of the survivors, fallen and their families from that fateful day of Dec. 7, 1941, as well as underscore the remarkable period of history when the country — service member or not — came together for the greater global good.

Craig recalled a comment from the late Dan Garrott of Mayfield. Garrott, who was awarded the Silver Star and French Croix de Guerre in WWII, said that time was when all Americans were fully invested into the effort to combat the Axis of Germany, Italy and Japan. Locally, that included ration boards, Meritt Clothing factory in Mayfield adjusted their productions to create overcoats for the Army, and an ammunitions plant was built in the community of Viola.

“He said it didn’t matter what you did in the war, it didn’t matter if you never left the United States, you were part of the effort,” Craig recalled. “We were all in this together. It was the only war America ever fought where the population was damn-near 100% behind the war.”

Eric Walker is news editor for The Mayfield Messenger and Marshall County Tribune-Courier. He can be reached at ewalker@mayfield-messenger.com or editor@tribunecourier.com.

Eric Walker is news editor for The Mayfield Messenger and Marshall County Tribune-Courier. He can be reached at ewalker@mayfield-messenger.com or editor@tribunecourier.com.