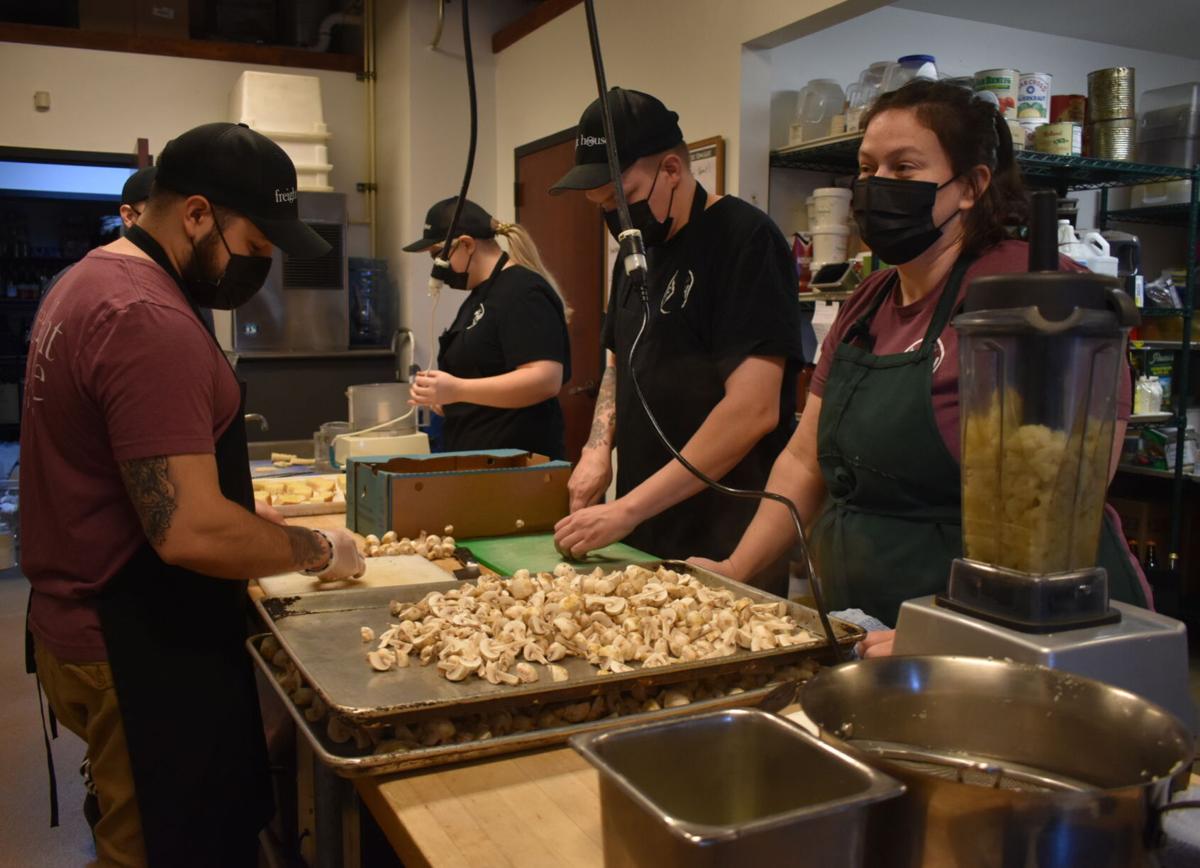 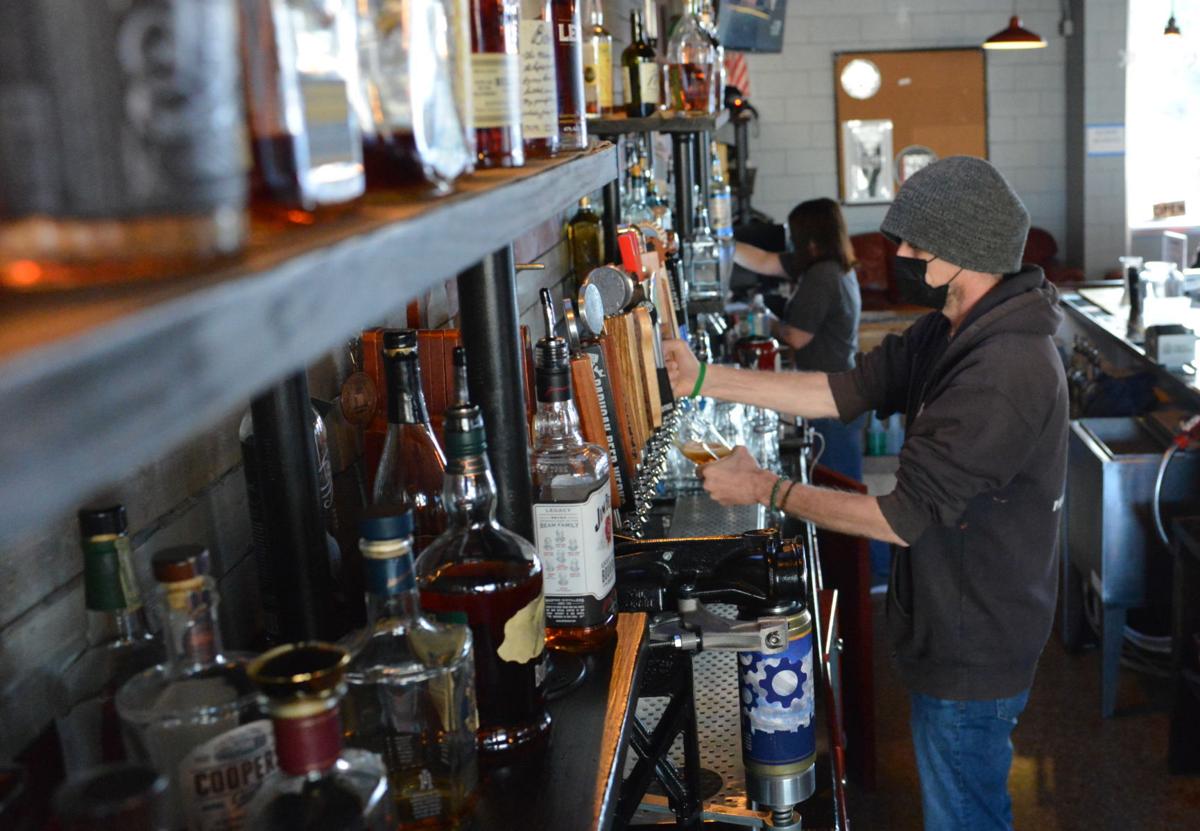 J.P. Birchfield pours a glass of beer Wednesday afternoon at Paducah Beer Werks. The business’s owner, Todd Blume, said it’s helpful the city of Paducah has waived 2021 alcohol license renewal fees for certain types of licenses, explaining that it allows them to reinvest it into their businesses. The waiver is expected to benefit 108 Paducah businesses, such as Paducah Beer Werks, Freight House and Strickland’s Seafood.

J.P. Birchfield pours a glass of beer Wednesday afternoon at Paducah Beer Werks. The business’s owner, Todd Blume, said it’s helpful the city of Paducah has waived 2021 alcohol license renewal fees for certain types of licenses, explaining that it allows them to reinvest it into their businesses. The waiver is expected to benefit 108 Paducah businesses, such as Paducah Beer Werks, Freight House and Strickland’s Seafood.

The new city commission unanimously approved an emergency ordinance Tuesday, which waives 2021 renewal fees for certain types of licenses that are due Jan. 31. It joins several other city actions to aid businesses amid the pandemic, which included $2,000 grants through a Small Business Relief Fund and providing more outdoor dining space near Market Square in 2020.

According to the city, the Kentucky Department of Alcoholic Beverage Control has allowed for a 12-month fee waiver on certain license types and this action “mirrors” the state. The city expects its ordinance to provide a total benefit of approximately $96,830 for 108 local businesses, which have 201 licenses.

“Because we’re a microbrewery, we have a brewer’s license, a microbrewer license. We have an NQ-2 retail (license),” Paducah Beer Werks owner Todd Blume told The Sun.

“So, we have multiple licenses that we have to purchase, in order to function. What this has allowed us to do is to take that money that we would normally spend on these licenses, and save it. Basically, reinvest it into our business.”

He called it really helpful.

“It’s just like when they gave us the grant, that was a huge, huge help,” Blume said. “It’s a drop in the bucket, but at the same time, every little bit counts, especially in the economy that we’re in.”

Another local owner, Freight House’s Sara Bradley, had previously written a guest column that was published Dec. 10 in The Sun titled, “Local restaurants need federal help,” in which she also asked for support from local city government.

On Wednesday, Bradley expressed appreciation for the city’s action to waive the fees and noted its past assistance with the $2,000 grants last year.

“The last commission, they didn’t have time to do it (before the year ended), so they made sure to make sure it got on the agenda, and we’re so happy that the new commission and the new mayor voted to approve the ordinance,” she said.

Bradley described it as leniency that’s been granted toward businesses and noted that her restaurant license costs more than $1,000.

She also pointed out the mandated closures and limited indoor dining capacity that has ranged from 25% to 50% at different times in the pandemic.

“As businesses, we weren’t able to fully capitalize on the business license and the liquor license that we paid for. So, I think that it was just a really great gesture ... from the commission and the new mayor to show their support for us and show that they understand the hardships we’re facing,” she said.

Blume and Bradley’s sentiments were echoed by Strickland’s Seafood co-owner Laura Strickland, who said the ordinance saves the restaurant $1,200.

“It’s due this time of year, and this is a restaurant’s slowest time already — January to March,” she said. “And then with COVID on top of it and our sales plummeting with the increased cases, it really helps us tremendously.”

Strickland is thankful and shared that she was part of a meeting with several other restaurant owners, where they met with Paducah Mayor George Bray, before he was sworn-in.

“He attended this meeting with us and we expressed to him our concerns with that and how the state had already made that effort to help us with the ABC license,” she said. “And that we would really like to see the city do what the state had done, to try to help us get through these rough patches, because it’s been a very, very difficult year for restaurants and bars.”

Paducah businesses are required to send the city finance department a copy of their 2022 state alcoholic beverage license on or before Jan. 31, for them to receive a local alcohol license, according to the city.

They need to have a current business license and be up-to-date on payroll and property taxes to get their local license, the city states. It also states the waiver is only for businesses renewing annual licenses, while new applications must make a payment.

Before Tuesday’s vote, Bray said the city is known as a restaurant town and said it’s an important part of the economy, which has been “affected greatly.”

“This will not make the difference as to whether or not a restaurant will keep their doors open or not, but this is a signal from the city that these restaurants are very important to us,” he said.

He referenced the city’s efforts to help restaurants last year, such as closing down part of the Market Square area for outdoor dining, and said it will continue to work with restaurants in the future.

The city provides answers for frequently asked questions and a list of alcohol license types that aren’t being waived at its website, paducahky.gov.