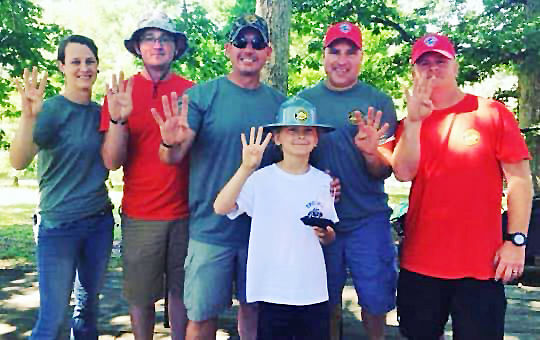 From left, Sarah Burgess, Jody Cash, Sean Wint, Brent White and Derryl Redwine pose with a camper at Trooper Island. The camper had just won an award and was staying in Cabin Four; hence the four fingers. White, the Lyon County sheriff, shared that Cash had contacted him and told him they should bring their kids, who were close in age, to Trooper Island. 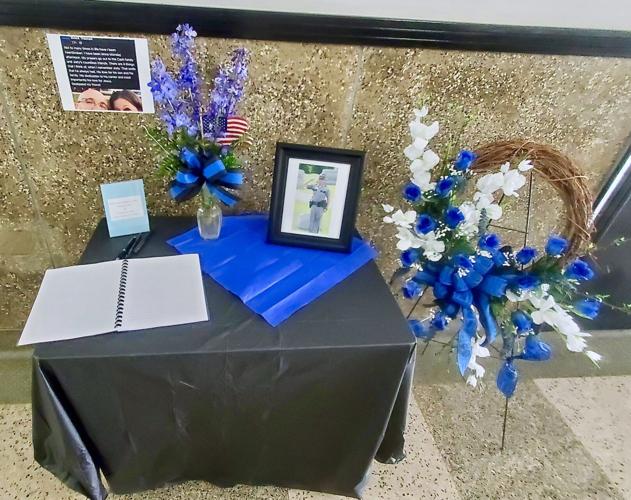 A memorial to Calloway County Sheriff's Office Chief Deputy Jody Cash, a Princeton native, was set up this week in the Caldwell County Courthouse. Visitors are encouraged to sign their name and leave a note or story in honor and memory of Cash. 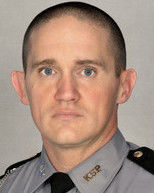 From left, Sarah Burgess, Jody Cash, Sean Wint, Brent White and Derryl Redwine pose with a camper at Trooper Island. The camper had just won an award and was staying in Cabin Four; hence the four fingers. White, the Lyon County sheriff, shared that Cash had contacted him and told him they should bring their kids, who were close in age, to Trooper Island.

A memorial to Calloway County Sheriff's Office Chief Deputy Jody Cash, a Princeton native, was set up this week in the Caldwell County Courthouse. Visitors are encouraged to sign their name and leave a note or story in honor and memory of Cash.

“I went to church with him, and when I first started as sheriff, I wanted to hire someone that I knew was a good man, and was a good Christian man, and he had the community at heart. Jody fit the bill. As a matter of fact, he exceeded the bill. He was probably one of the best deputies I’ve ever had because he had a love for the Lord, and for his family and especially for the community.”

Hudson said Cash had the potential to be anything he wanted to be, but he chose law enforcement because he truly loved it.

“He loved law enforcement and he loved helping people and serving and protecting people,” Hudson said. He also noted that Cash was very intelligent and actually wrote Hudson’s first policy and procedure manual.

“He loved his brothers and sisters in law enforcement and everybody loved him,” Hudson added. “It’s just a tragic loss that we’ve lost someone like that, because finding people like Jody Cash is hard to find. He’s just one of the few that you’re fortunate enough to meet during your lifetime, and we’re just really going to miss him.”

Retired Times Leader editor Chip Hutcheson also paid tribute to Cash this week, sharing that Cash had grown up with Hutcheson’s son John Mark. Cash had been a baccalaureate speaker alongside Hutcheson’s son, when their class graduated in 1996. Hutcheson shared his own memories of Cash in an column for Kentucky Today (see D1 for column) and noted that “you’d be hard pressed to find someone who didn’t know Jody, his parents Wayne and Teresa Cash, or other family members.”

“Our family has so many fond remembrances of Jody from his school years in Princeton,” Hutcheson told the Times Leader.

“He was one of the easiest people in the world to get along with, and everyone who knew him will remember that terrific smile that was on his face regardless of the circumstances he faced. Whatever he tackled, he always did 100%, and there was no quit in him. Princeton and Caldwell County take great pride in the people that call the community their hometown, and Jody made us proud.”

Ronnie Sivells was Cash’s pastor at Southside Baptist Church when he was a teenager.

“It was my privilege to have served the church where Jody attended and spent his teenage years, the Southside Baptist Church in Princeton,” Sivells said. “Even in those early years, Jody displayed humility and kindness to all people he was associated with. It was obvious back then that he was a special young man.”

Sivells continued to say he had “a keen interest in law enforcement. Even though it seemed Jody didn’t fit the part, his interest never waned. He exhibited bravery that on the surface didn’t seem to fit his makeup, but his courage was always evident. No one could have been more caring that Jody for kids. He was a helper and a doer, coming to the aid of anyone who needed it. Our region has lost a great man as we say goodbye to officer Jody Cash.”

Jaime Green, former Eddyville police chief, remembers Cash when he was working at Murray State and described him as “one of the kindest, sweetest men you’d ever meet.”

“I was doing accreditation and policies and procedures,” Green recalled.

“I would go meet with Jody at Murray and he would go over stuff with me to kind of guide me and teach me as to what was required and how to do those kind of things.”

Green had seen him recently at a lunch meeting held for law enforcement agencies that used federal overtime grants, and described him as the exact same then.

“I sat right next to Jody,” she said, “and he is one that, if you had a frown on your face, or you were having a bad day or you were down, within 10 seconds that man would put a smile on your face. He was just that kind of person. He was wonderful.”

Cash pursued a career with Kentucky State Police in 2011 and he was valedictorian of his cadet class, and was later recognized as Post 1 Trooper of the Year. He served for a number of years alongside current Lyon County Sheriff Brent White when they were troopers at Post 1.

White shared that he remembered the first day Cash worked for the Caldwell County Sheriff’s Office. White was already a trooper at the time.

“He was very much family oriented,” White said.

“And he loved everybody. He had a drive for public service like no other, but he also had a love for his fellow man and exhibited empathy in a time where it was hard for some of us to do that.”

“I don’t think anybody at the time pictured Jody being a police officer,” White continued. “He was soft spoken, he was so easy going, and many times when you meet a police officer, they’re that Type A personality. And there’s a reason for that, but they can sometimes be viewed as standoffish -well, that was not Jody Cash. Jody had a warm disposition about him that just made you feel glad to be around him.”

Cash had shared with White some of the struggles he faced during his time at the academy, and White felt that it was because the instructors didn’t think Cash had what it took to be a trooper.

“He was soft-spoken, he was so good-hearted,” White said, “that they looked at that, I believe, as a weakness. But that was a calculated error on their part. Jody Cash was anything but weak. Jody Cash had a determination and a tenacity about him that was so admirable, but so hidden from view, in many cases you didn’t see that side of Jody unless you worked with him on a daily basis. What they didn’t know was that Jody Cash was not a quitter.”

White had actually hoped that he had a voicemail from Cash, because he always started his calls in the same way. “It always started out like this: ‘Hey, buddy, how you doing?’,” White said, adding “and you were just instantly pleased to hear Jody say that to you.”

He continued by saying that any time Cash asked for assistance, you were eager to provide it, because you knew that he would pay back in kind — or probably already had.

“I think that’s why you see the outpouring of love and affection for Jody and his family at the point of his death,” said White, “because we all have guilt associated with how inadequate we’ve reciprocated to Jody, with what all he’s done for us.”

According to White, Cash attended a Post Critical Incident training seminar put on by state police and even sought out additional training on his own, all because he saw the need. At the time of his death, he was pursuing his Master’s degree in regard to mental health counseling.

“Jody was very dedicated to helping his fellow first responders,” said White, “and none of that should surprise anybody that knew Jody.”

Cash retired from state police with the rank of sergeant and had been serving with the Calloway County Sheriff’s Office.

“In the years to come at this ceremony,” wrote Knight, “I have no doubt he will still be standing at attention, still beaming with pride, but we will have to remember his smile because the playing of ‘Taps’ will be in his honor.”

“End of Watch” is a phrase often used in law enforcement to refer to the date of death of an officer killed in the line of duty.

“It is with tears in my eyes, a heavy heart, and a somber spirit that I must attach the three most painful letters in law enforcement to my dear friend Jody Cash’s name, EOW. Chief Deputy Sheriff of Calloway County Jody Cash End of Watch (EOW) May 16, 2022. Rest easy brother, we will take it from here, you will be missed, but we (will) never let you be forgotten,” he concluded.

A funeral service for Cash is set for 1 p.m. Saturday, May 21 at the CFSB Center in Murray. Gov. Andy Beshear ordered for flags at state buildings to be lowered to half-staff from sunrise to sunset Saturday, in Cash’s honor.