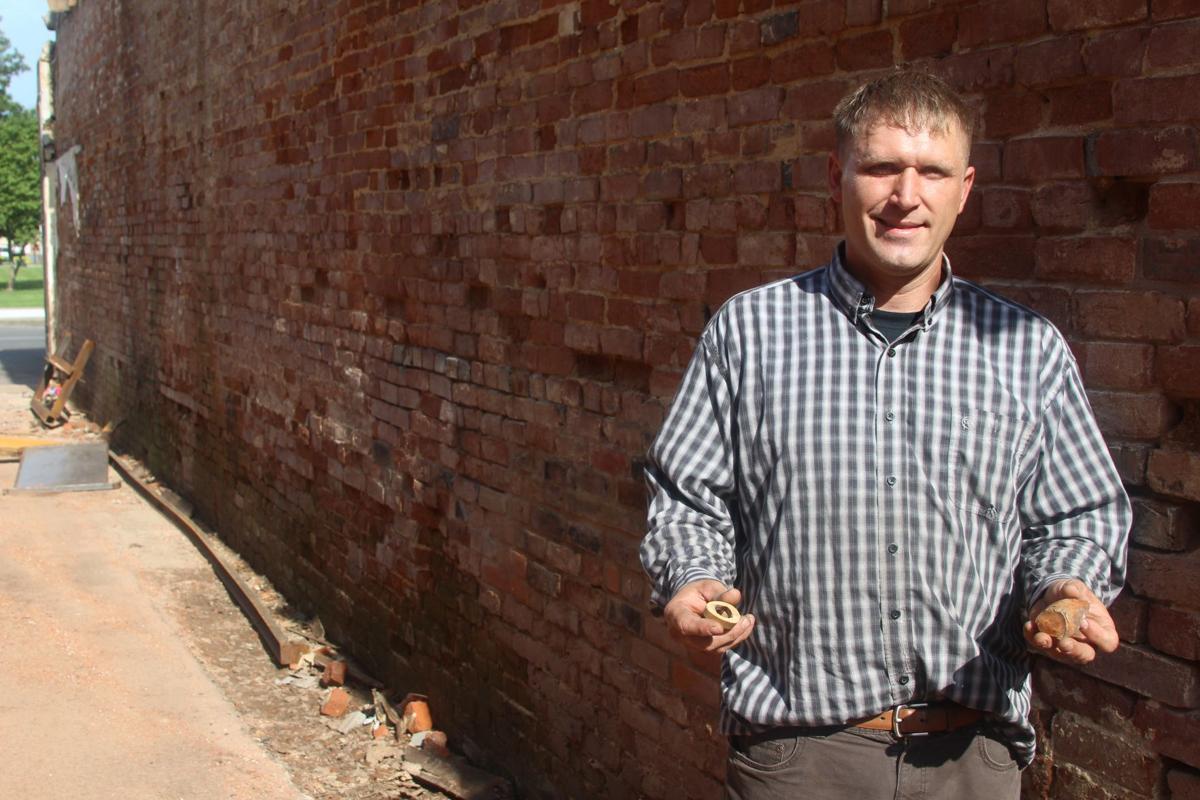 Jonathan Riley holds two fragments of bone he discovered doing demolition work in Mayfield’s downtown area. Some of his finds were turned over to Mayfield Police and the local coroner for closer examination. 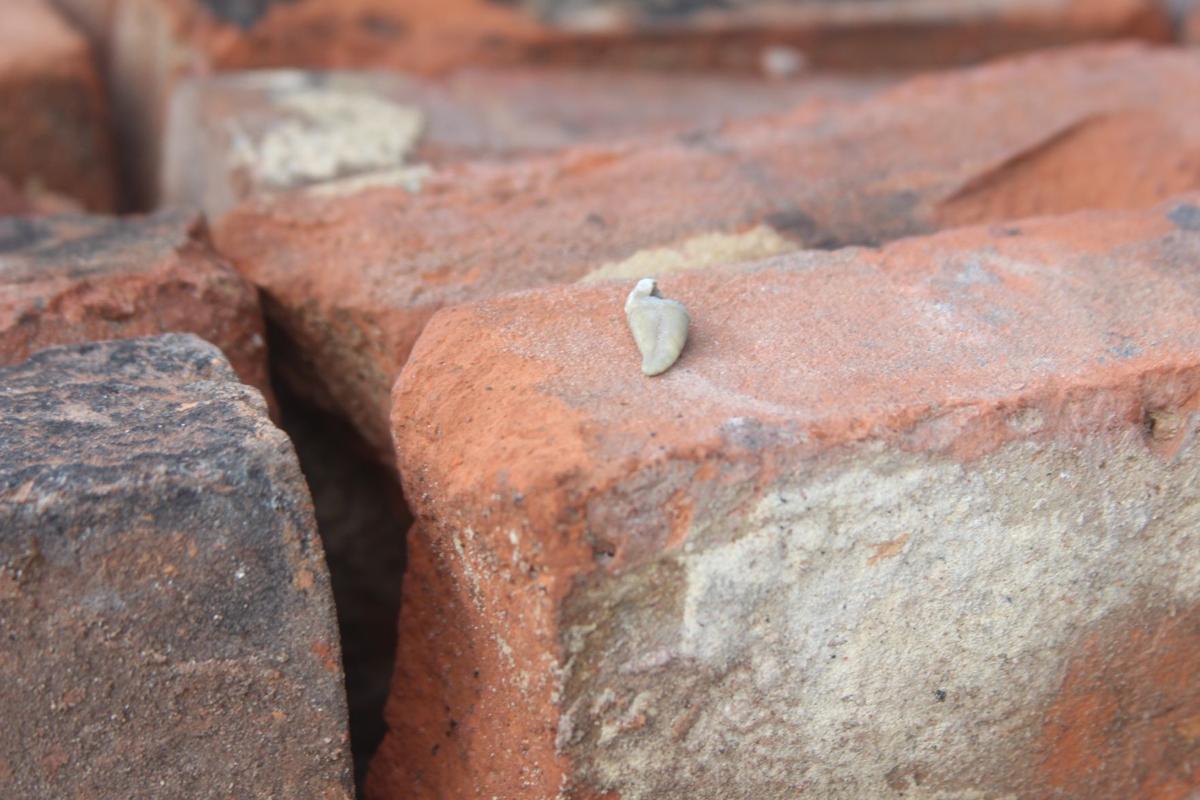 Shown is a canine-like tooth Jonathan Riley found at a building site he is working to demolish. He said he had found more than 200 teeth at the location, which may have housed a dental office in the late 19th century. 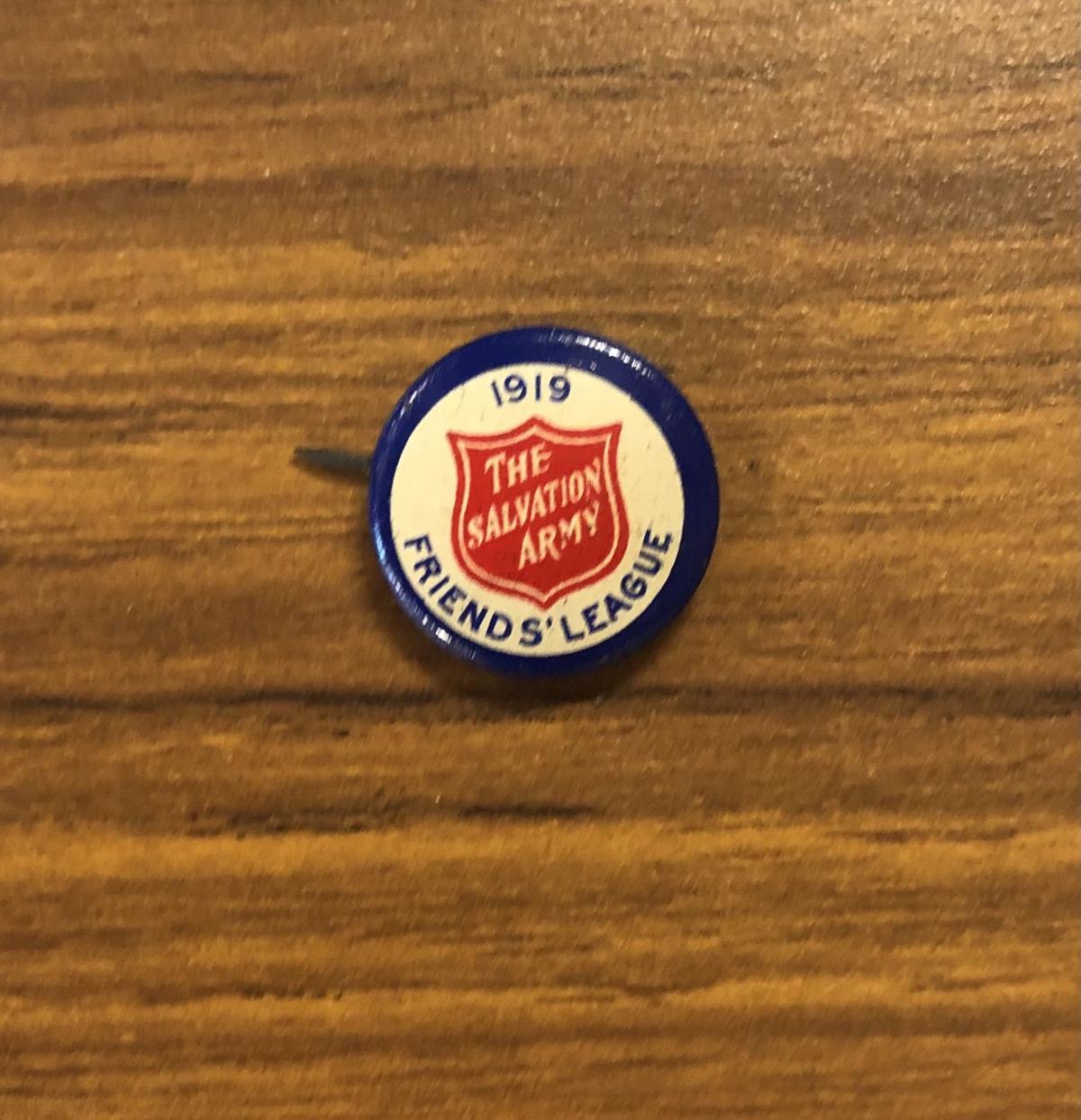 Pictured is a 1919 Salvation Army pin discovered at a Mayfield building site being torn down. Despite the demolition, the pin was in near perfect condition and ushered in some other unique finds.

MAYFIELD — Jonathan Riley has gone from simply taking part in demolishing some buildings downtown to playing the roles of part Indiana Jones and part Sherlock Holmes with some of the discoveries he’s made.

Recently tearing down the buildings along Mayfield’s court square at 105 S. 7th St. and 110 and 112 W. Broadway, which had been damaged and partially collapsed after a powerful 2019 storm, Riley had come across a 1919 Salvation Army stick pin as one of his unique finds, but more notably had discovered a trove of teeth and bones in the rubble and walls.

He figured he has found approximately 200 teeth and five other bones at the site. Riley admitted he wasn’t that surprised to make some interesting discoveries sifting through debris, though bones and teeth were not what he expected.

“The bones? That was a bit freaky,” he added.

Riley handed his first discovery over to Mayfield Police to investigate. Police Chief Nathan Kent said an email from Det. Lt. Mark Watkins indicated the bone was examined by Graves County Coroner Brad Jones and a local dentist and that both do not believe it was human.

Watkins told Kent it is believed some dentists also doubled as veterinarians around the turn of the 19th and 20th centuries. Riley also said he had spoken to local historian and former Graves County Sheriff John Davis and learned there was a dentist who practiced out of the west side of the courthouse square around that time.

Riley said he believed the structure to have been built around the 1860s. Watkins added in his email to Kent that Mayfield Police had previously been called to the same site during a renovation when teeth had been discovered and came to a similar conclusion.

Jones, the chief added, was to send photos of the bone to the state medical examiner this past week.

Ben Crawford, who has an equipment rental business and who had rented some of the equipment Riley was using in his demolition work, said the story was a bit fantastical when he first heard it while working on a repair at the building site.

“I’m sitting there fixing my machine and he said, ‘You know, I’ve been finding bones in this building,’ ” Crawford recalled. “I’m like, ‘Well, that’s interesting.’ I figure the bones could be from anything.”

Sensing some skepticism, Riley went hunting for a bone or two and in the span of a few minutes produced a brick with an approximate inch-thick slice of bone in the mortar.

“It looked like one you’d find inside a country ham, but it was larger,” Crawford said. He said it had to have been placed there when the bricks were being laid because the mortar was through the hole in the middle of the bone.

Crawford asked Riley if he had it stashed away so he could easily find it to show. “He said, ‘No, they’re all over the place. I went through the pile and found it.’ ”

Crawford said Riley then came back with two more bones. “I’m thinking 120 years ago or however long it was, some guy laying brick maybe he had country ham for lunch and put that little bone in there,” he said, “but you can’t eat that much country ham or steak for lunch.”

Then Riley shared about the teeth he had also found.

“I’m not a dentist. I’m a mechanic. He was just picking a random pile of rubble and starts handing me teeth,” Crawford recalled. “Every one I saw had some sort of problem with it.”

He said his mind started racing to them both standing at a potential crime scene from the past, but learning the building had housed a dental practice and the teeth may have been discarded remains of extractions made more sense. Riley also wondered if bones had been used to make mortar for the bricks.

“I think you can make concrete or cement out of bones. I think people have done it for years with seashells,” he said.

The unusual nature of it all reads a tad like a mystery that may or may not be one, which sort of adds to the mystery.

“Unlike Paul Harvey, I don’t fully know the rest of the story” Crawford said, referring to the late radio storyteller and his catch phrase, “but it makes for an interesting tale.”