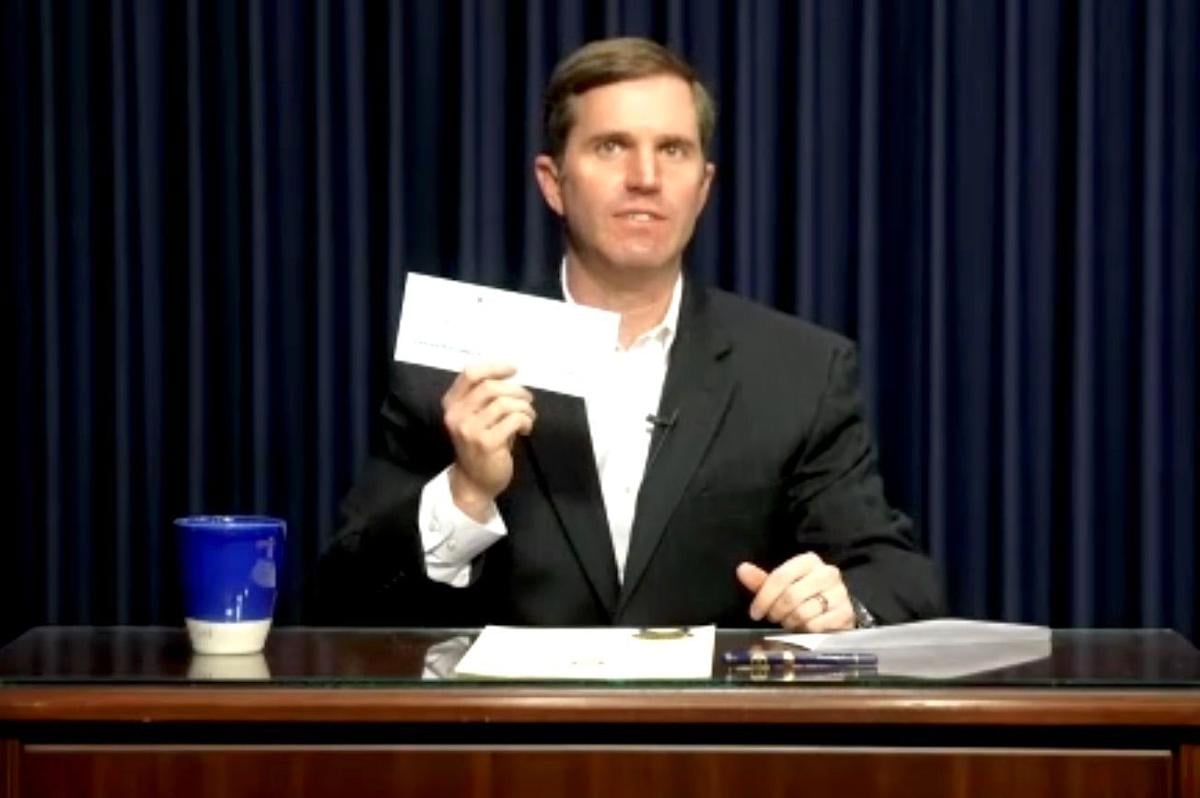 Gov. Andy Beshear holds up a check for $15,673 — part of the surplus from his inauguration fund — that he donated to Feeding Kentucky to help with its efforts to stop hunger statewide. 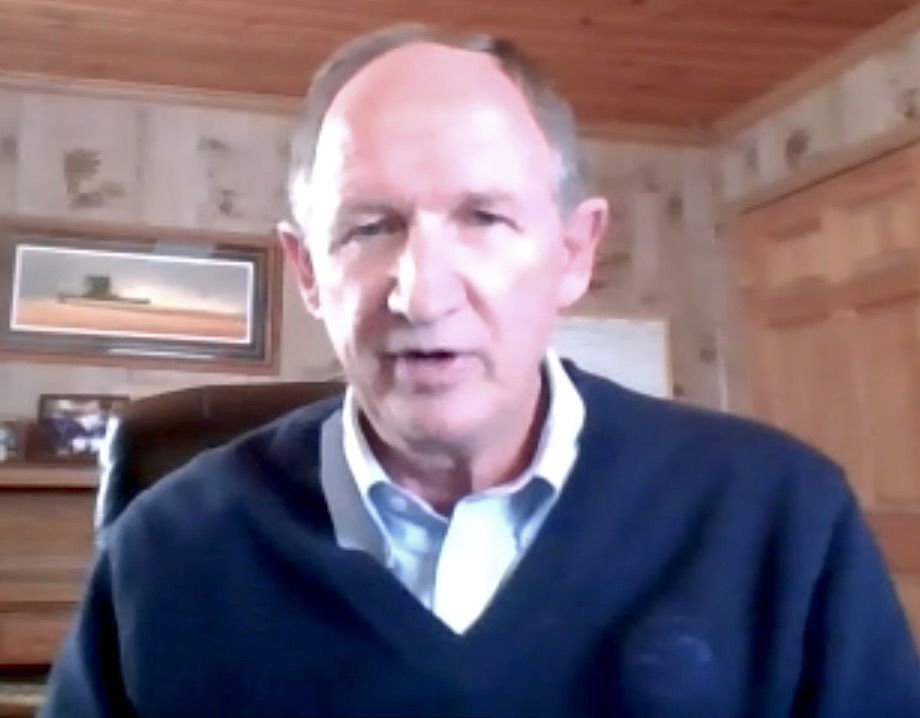 State Rep. Richard Heath (R-Mayfield) serves as the chair of the House Agriculture Committee and spoke about the efforts the General Assembly is making in the fight against hunger. 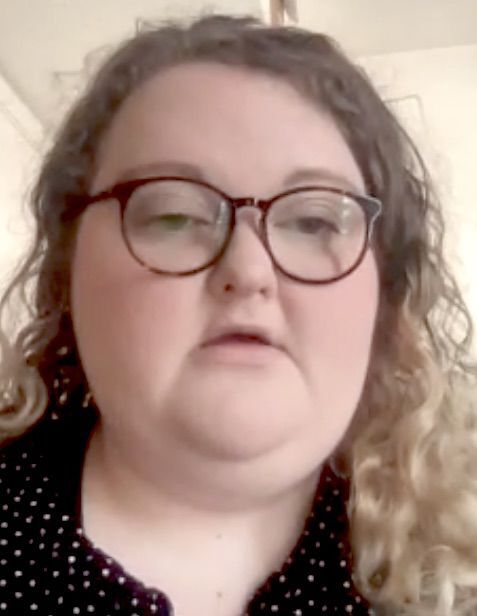 Gov. Andy Beshear holds up a check for $15,673 — part of the surplus from his inauguration fund — that he donated to Feeding Kentucky to help with its efforts to stop hunger statewide.

State Rep. Richard Heath (R-Mayfield) serves as the chair of the House Agriculture Committee and spoke about the efforts the General Assembly is making in the fight against hunger.

The guest speaker was Alisha Mays of Lexington, who grew up in Richmond, Kentucky, and is a food anthropologist pursuing her Ph.D in anthropology at the University of Kentucky.

Mays said her history of food insecurity began from birth.

“My food story begins on Jan. 7, 1991, in Richmond, Kentucky,” she said. “I was born to an undernourished 15-year-old woman. My first meal, Enfamil, made me sick. That was the first time Mom worried about her children eating.

“My mama — a young mother raised in Kentucky’s foster care system — has worried about food her whole life. As a child, she grew up in food-insecure and abusive foster homes, and as a mother, she prayed for WIC (Women, Infants and Children) vouchers and borrowed money when infant formula seemed to vanish from the container.”

Mays said she grew up in Kentucky, “a state known for being an agricultural powerhouse with a pocket in the east also known for grinding poverty.”

“My food story is hungry tummies, yet memories filled with Thanksgiving feasts so big, the whole family ate for weeks,” she said. “My food story is characterized by sharing and never eating the last one of something because somebody else might want it.”

Mays said she has shared her story with professors, students and people in soup kitchens.

“Each time I share this story, I always feel something different,” she said. “However, the response is typically the same. I am met with a wave of people coming to privately talk to me and say, ‘Hey, me, too. Your story is my story.’

“I am then left to deal with the pain and anger that my hardest moments are still a reality for the people I pass on the street, students I teach, our neighbors and fellow Kentuckians.”

Gov. Andy Beshear signed a proclamation making Thursday “Hunger Free Kentucky Day,” but before he did that, he made an announcement regarding Feeding Kentucky.

“Just about every governor — when they’ve been inaugurated — after the inauguration, has some dollars left in their inauguration fund,” he said. “That was the same with the Beshear-Coleman Inauguration Fund. As we have gone through COVID and watched different organizations rise to the challenges they face, I’ve been so impressed by everything this organization has done to help all our Kentuckians in every part of this state.

“So, the great news is we ended up with a surplus, and today, I’ve got a check for $15,673, which we’re going to be donating to Feeding Kentucky to help with the outstanding work you’re doing to keep people from going hungry.”

“We must all continue this important work,” he said. “The economic hardships caused by COVID-19 are deep, and they’re going to be with us even after we beat this virus, which we are going to do in 2021.

“We must work together until not one child in Kentucky goes to school hungry and not one single Kentuckian has to decide between eating or paying their bills or buying their medication.”

State Rep. Richard Heather (R-Mayfield), who represents District 2 — which includes Graves and part of McCracken counties — is the chairman of the House Agriculture Committee and spoke about hunger.

“As we all know, Kentucky has one of the highest percentages of food insecurity in the country,” he said. “Over 186,000 children are food-insecure, and 1 in 5 children struggle with food hunger, and that was before the pandemic hit, and I’m sure those statistics are even worse now.

“These numbers are startling, but they are also evidence that we still have a great deal of work to do. While the issue is complex, the General Assembly is committed to understanding the factors that play a role in hunger and then working to solve these pervasive problems.”

Heath mentioned policies that have been put in place in the last few years by the General Assembly to help resolve food insecurity. He listed making the Wednesday of Farm Safety Week designated as Farmer Suicide Prevention Day, a bill that implements the Food Safety and Modernization Act and Produce Safety Rule and a bill that ensures that Kentucky consumers are aware of how the meat they are eating was raised and prohibits cultured animal meat — known as “fake meat” — as “meat.”

Kentucky Commissioner of Agriculture Ryan Quarles spoke about the work that Feeding Kentucky has done.

“The need is great, but we still have a lot of work to do,” he said. “I am confident that, had it not been for Feeding Kentucky and the infrastructure that you already have around the state, things would have been worse.”