Paducah’s city stopped at Ninth Street — running between its intersections with what are now Tennessee Street and Martin Luther King Jr. Drive to square off a boundary that began at the banks of the Ohio River. Everything else was McCracken County.

Since 1860 those limits have stretched miles to the west and south to encompass the mall area, some of Lone Oak and other former county territories. The way this growth happens is through a process called annexation.

Though it’s all in McCracken County, whether or not a home or business is in the city of Paducah matters for more than cultural cachet. It has a lot to do with the tax revenue for both the city and county governments.

“Annexations occur over time based on opportunity, based upon requests from people whose property is contiguous with the city and also based upon intentional efforts of the city to go out and grow and provide land for specific purposes,” Paducah City Manager Jim Arndt told The Sun. “You’ll see a lot of areas where we have annexed property for industrial developments and residential ones, as well. Really just over time it kind of takes on a life of its own, where you don’t have that nice, precise square box.”

What’s played out over the decades is an awkward push and pull as both governments fight for growth. The city limits now are far from a standard box. There are curves, twists and turns in the map, odd little fingers and offshoots stretching to surround single properties and even a few islands of county land almost completely surrounded by city.

All that’s required for the city to bring a new property into its bounds are that it be bordering on current city land. In the case of both residential and commercial properties, the developer or landowner can choose whether or not to be annexed. Residential neighborhoods can be annexed if a majority consents by vote or if the developer opts into annexation prior to residents moving in — this often is secured by paying back developers in ad valorem property taxes as the city takes care of infrastructure costs like curbs, gutters and streets.

Once a property is slated for annexation, “no real action can be taken on the county’s part to counter,” said McCracken County Community Development Project Manager Steve Ervin, also a retired city planner for Paducah.

The slow stretch of the city limits into the county can be problematic for county government, as the number of businesses annexed into the city prevents the expansion of the county’s tax base.

“They’re just exercising their right to do what they’re allowed to do on the one hand, on the other hand is, of course, the fact that the annexation of property outside the city, in a lot of cases, means there’s revenue that the county loses,” McCracken County Judge-Executive Craig Clymer said. “We’re not adversaries. What’s good for the city is good for the county, but there is that aspect that the city is taking what would be ours and benefiting from it.”

Annexation was established as one of the current city commission’s priorities in March.

“In the long run, annexation is really important to the city for growth and prosperity,” Paducah Mayor George Bray said. “When you look at new developments both residential and commercial, whether or not those developments are in the city can make a difference. The city in the past has had a bit of an uneven — maybe uncertain — strategy about annexation.

“I feel like our strategy needs to be very intentional and thoughtful.”

Annexation, McCracken County Commissioner Bill Bartleman said, “hurts the county because every time there’s a commercial development the city will annex it, and that means they’ll get the payroll tax, so it doesn’t allow us to increase our tax base by collecting the net profits tax that we’d get from businesses that operate there.”

Bartleman said he feels things should change regarding how the city goes about annexing properties, hoping for more open communication on the matter and potentially more revenue-sharing deals between the two entities.

“If you look at our revenue over the last 10 years from the payroll tax it’s only been a slight increase, and some years there’s been a decrease because of the annexation.”

Arndt understands the county’s perspective, but annexation, he noted, isn’t a total loss for the county and it’s not just free money for the city.

“They could see it that way. At the same time, it’s one of those things where it’s still whatever’s in the city is in the county,” the city manager said. “It doesn’t disappear — the population still counts as population and they get credit for that, they still get those property taxes. The only difference, primarily, would be that the payroll taxes would come to the city, but it’s still for all intents and purposes a county property.”

“When you grow, you want to make sure you do it strategically so that you can support those service requests (law enforcement, fire protection, utilities).”

One of the more contentious annexations by the city over the years was the portion of Lone Oak taken into Paducah after it dissolved its civic status in 2008 — many of the businesses along Lone Oak Road were annexed while subdivisions immediately adjacent were not — leaving the county responsible for providing fire, law enforcement and other services to the residents in those residential areas. This tactic is known as corridor annexation.

“They just targeted the employers and the jobs,” McCracken County Commissioner Eddie Jones said. “Why would a city want do that? Well, because of the 2% occupational tax they have. Once that employer is annexed, that is basically the city adding to its tax base and the county losing that from theirs. So the employees pay more, the city gets more and the county loses. 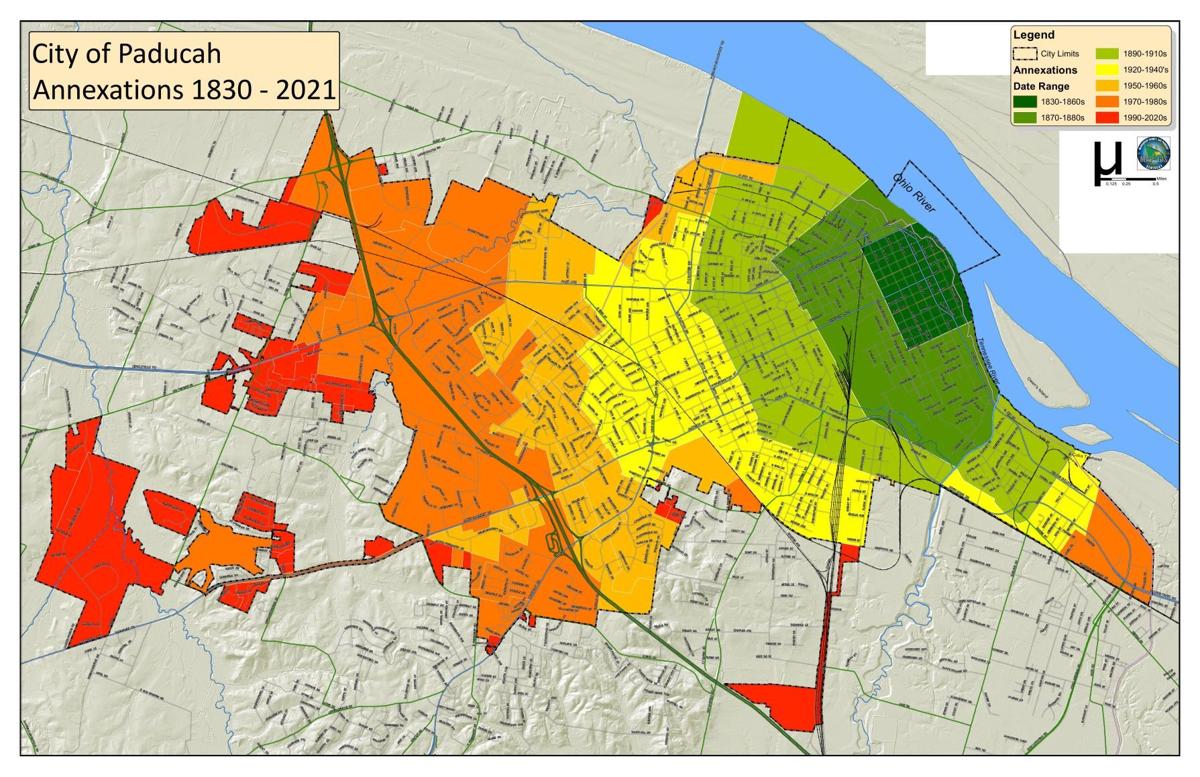 “It can truly cripple a county budget. You budget a certain employee force and then 90 days later they’re not there. It’s like a tornado.”

Both Bray and Arndt indicated there is a specific area in mind for the city when it comes to annexation in the immediate future. The city has annexed one property so far in 2021 and, as indicated during a budget workshop Tuesday, five more are planned.

“What we’re focused on is trying to continue to grow on the west end, just like the rest of the community is, and making sure we’re advantageous in trying to work with developers on commercial as well as multi-family residential developments,” Arndt said.

Bartleman estimates the county missed out on as much as $80,000 in annual payroll taxes just from the annexation of the Menards property in west Paducah alone.

There is a level of concern among the fiscal court that the city is planning to go after McCracken County High School as part of its westward expansion.

“If they start targeting the McCracken County school, it’s going to be a problem,” Jones said. “That’s what happened in Mayfield. They won and Graves County took a hit.”

The city of Mayfield’s 2016 decision to annex part of the Graves County School system’s property made waves statewide, resulting in a barrage of lawsuits and protests. Bartleman is hoping the same doesn’t happen in McCracken County.

“There’s some concern that at some point they’re going to try to annex the high school,” he said. “Obviously, the teachers who teach there would protest that but if they did that there’s very little that could be done other than maybe a court challenge.”

While Bray made no mention of the school in the city’s plans, he did say what he believes his strategy will be regarding annexation.

“The city is really not talking about annexing residential neighborhoods. That’s not our focus,” the mayor said. “Our focus is to make sure that we have the opportunity to annex those areas that grow that are contiguous to current city boundaries, for the most part voluntarily.”

This strategy, Bartleman said, is precisely why annexation isn’t good for the county.

“They don’t go in and annex the Farley area on the Southside because it’s a residential area and they won’t get a good bang for their buck on the payroll tax,” Bartleman said. “They’re not annexing residential areas to help those areas, they’re annexing the commercial areas to get the benefits of the revenue.

“They cherry-pick and they take the fruit from the top of the tree and then they leave what’s left over for the county.”

His fellow commissioner believes Paducah has been better than other cities with regards to its annexations in the past.

“I think historically, Paducah’s strategy toward annexation has not been nearly as harmful as other cities’.”