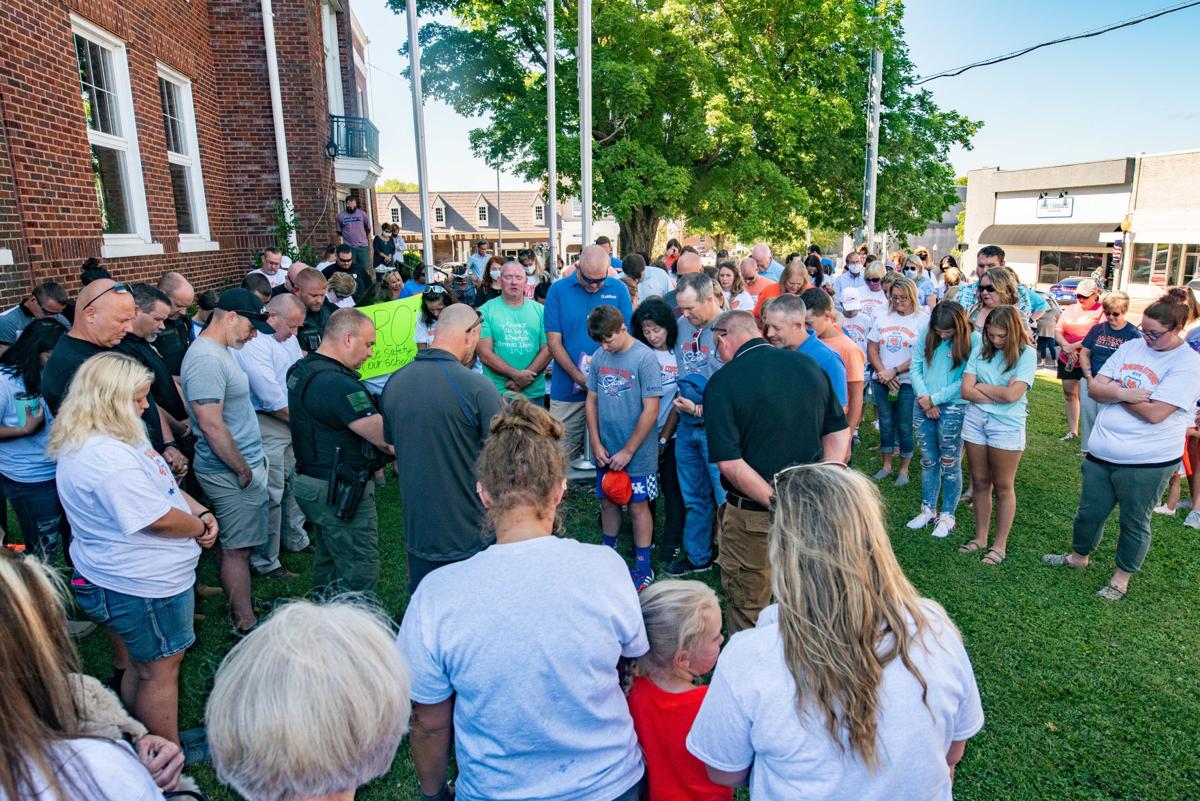 A crowd at the Marshall County Courthouse including (center-right) Brian Cope, his wife, Teresa Cope, their son Maddox, and Jasen Holt (center) prays after a rally in support of the school resource officer program shared between the county and the school system. The Marshall County Fiscal Court fully funded its part of the program in the recommended budget Tuesday afternoon. 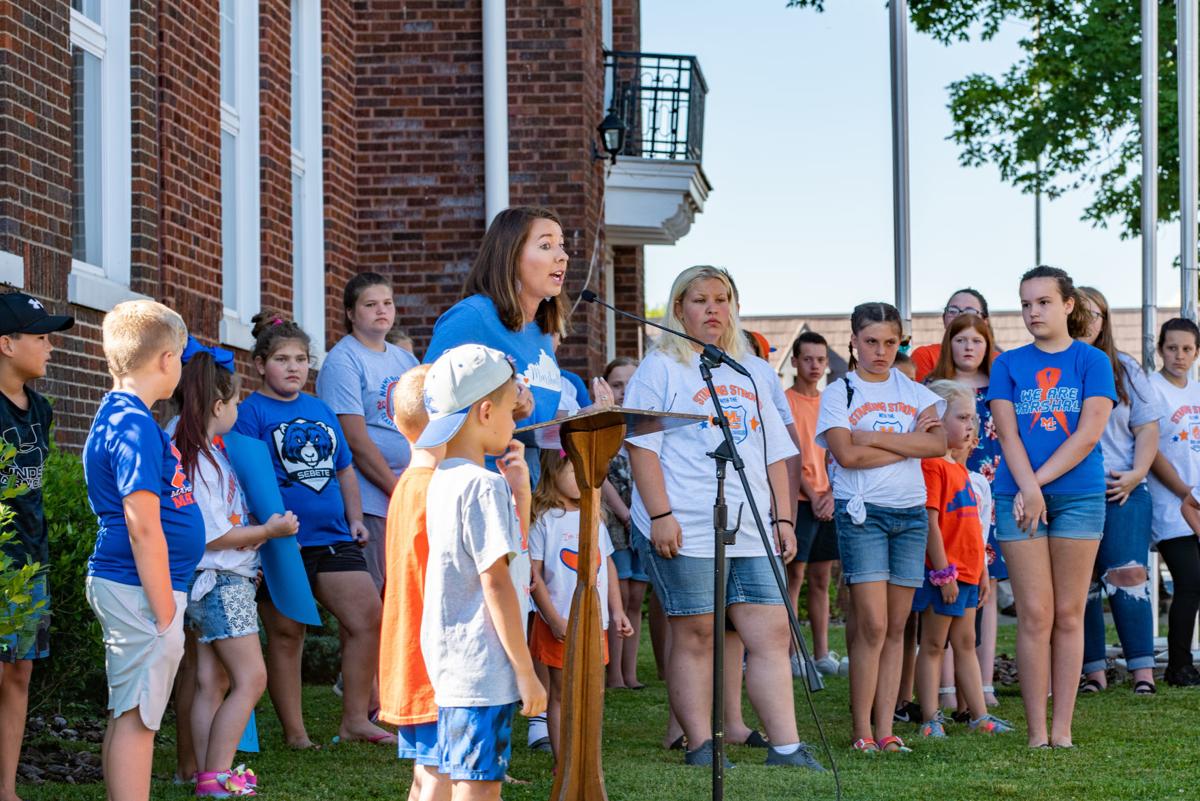 Jessica Scillian, the mother of a Benton Elementary School student, speaks among a group of children at a rally outside the Marshall County Courthouse on Tuesday morning. 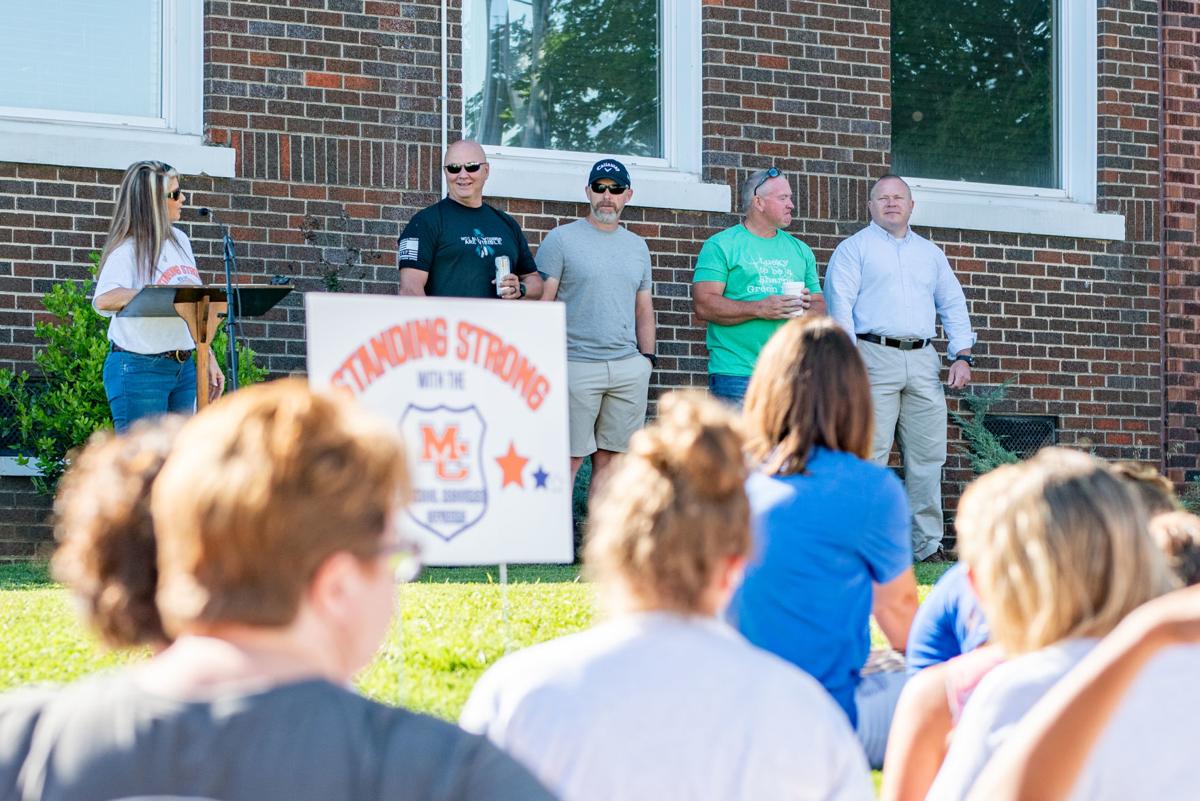 A crowd at the Marshall County Courthouse including (center-right) Brian Cope, his wife, Teresa Cope, their son Maddox, and Jasen Holt (center) prays after a rally in support of the school resource officer program shared between the county and the school system. The Marshall County Fiscal Court fully funded its part of the program in the recommended budget Tuesday afternoon.

Jessica Scillian, the mother of a Benton Elementary School student, speaks among a group of children at a rally outside the Marshall County Courthouse on Tuesday morning.

BENTON — Hours after a large crowd turned out for a rally at the Marshall County Courthouse on Tuesday in defense of the school resource officer program, the county fiscal court recommended not only funding its share of the current eight resource officers, but adding three more positions.

That recommendation, if the budget is ultimately approved, would help to provide at least one officer in each school in the county and keep the program administrated by the sheriff’s office.

County Commissioner Monti Collins said the county’s cost-sharing agreement with the school system leaves the county on the hook for about $140,000 for its share of all 11 officers.

The rally, organized after recent comments from Judge-Executive Kevin Neal that the county should not have to support the program, featured speakers including Sheriff Eddie McGuire, Brian Cope — whose son Preston was killed in the January 2018 shooting at Marshall County High School — a current school resource officer, a teacher and a parent.

Just four days after shooter Gabe Parker was sentenced to serve life in prison, Cope advocated for the presence of an officer in every school.

“We don’t want any parent to have to go through what we experienced two years ago,” Cope said.

He said he would even be in favor of a small tax increase at the state level to exclusively fund school security across the commonwealth, but he said the idea hasn’t taken hold among legislators.

“I’m tired of people listening and not doing anything,” said Cope, before announcing that he’s pledging $5,000 of his own money to start a foundation or fund to help defray local costs for school security.

After the rally, Cope drew attention to school systems across the country being underfunded, and said that perhaps taking a chunk out of their security costs could help “take that money … and let them put it back into our children and into our education system that’s broken.”

The event wrapped up just before the fiscal court meeting began, with an emotional performance of Alabama’s “Angels Among Us” by Marshall County student Ellie Hack.

Following the rally, the fiscal court conducted its meeting and budget session, during which the commission decided to keep funding for the program and fund three more retired officers to bring the total of school resources to 11.

The budget still has not been approved, but commissioners said it could be voted on and approved as soon as Monday.

McGuire called the budget “a win for our kids.”

McGuire said he thought the protest may have helped cement the commissioners’ decisions to keep funding the county’s share of the program.

“This is what the citizens want, and not just what Eddie wants,” he said.

Marshall County Schools Superintendent Trent Lovett said he was pleased with the outcome, and hopes the budget wins approval.

“To me, what could be more important than student safety,” Lovett said after the workshop.

“I was proud to see the support from the community.”

Lovett said he already believed the commissioners would be in favor of keeping the program under the sheriff’s office.

“I don’t think you can put a price tag on safety,” Lovett said. He said the school system is expected to provide about $475,000 for its share of the officers during the school year.

He said if the budget is approved and three additional officers are hired, the high school will keep three officers, with one assigned to each of the rest of the county’s schools.

“Our elementary schools aren’t any less important to me than the high school,” he said.

Commissioner Kevin Spraggs, who vocally opposed Neal’s statements about the program, said he was “100% supportive” of the current agreement with the schools to fund the officers, and appreciated the turnout at the rally.

“The public support behind this whole thing was just overwhelming,” he said.

“I do think … it was instrumental in getting things done.”

Collins said it didn’t take him long to feel the community’s support for the program.

“Over the past two weeks, I’ve been contacted on this subject by more than probably any other subject in the first 18 months of my political stint here,” he said.

“It resonated with a lot of folks.”

Collins said he had talked with Cope and appreciated the idea of the fund to help with security costs.

“I feel like we’ll be able to, publicly and privately, be able to raise some money to help that cause,” he said.

McGuire said that, pending final approval, he hopes to get the three positions filled as close to the beginning of the fall school term as possible.

“We’re going to work our tails off to try to recruit the best officers we can,” he said.