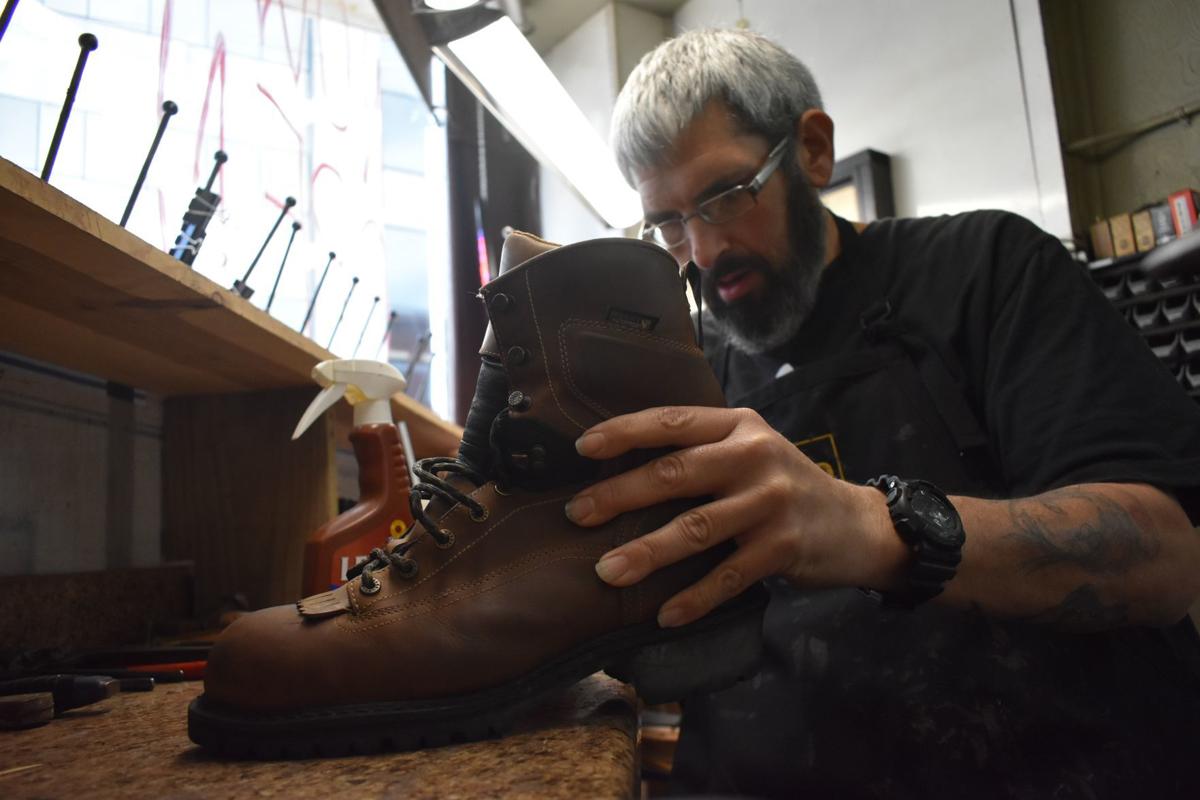 Jimmy Garland — one of the new owners of Boaz Shoe Repair, along with his partner Marquitta Woodford — works on a boot Thursday. The couple reopened the shop about two weeks ago, nearly five months after the 101-year-old local business closed its doors. 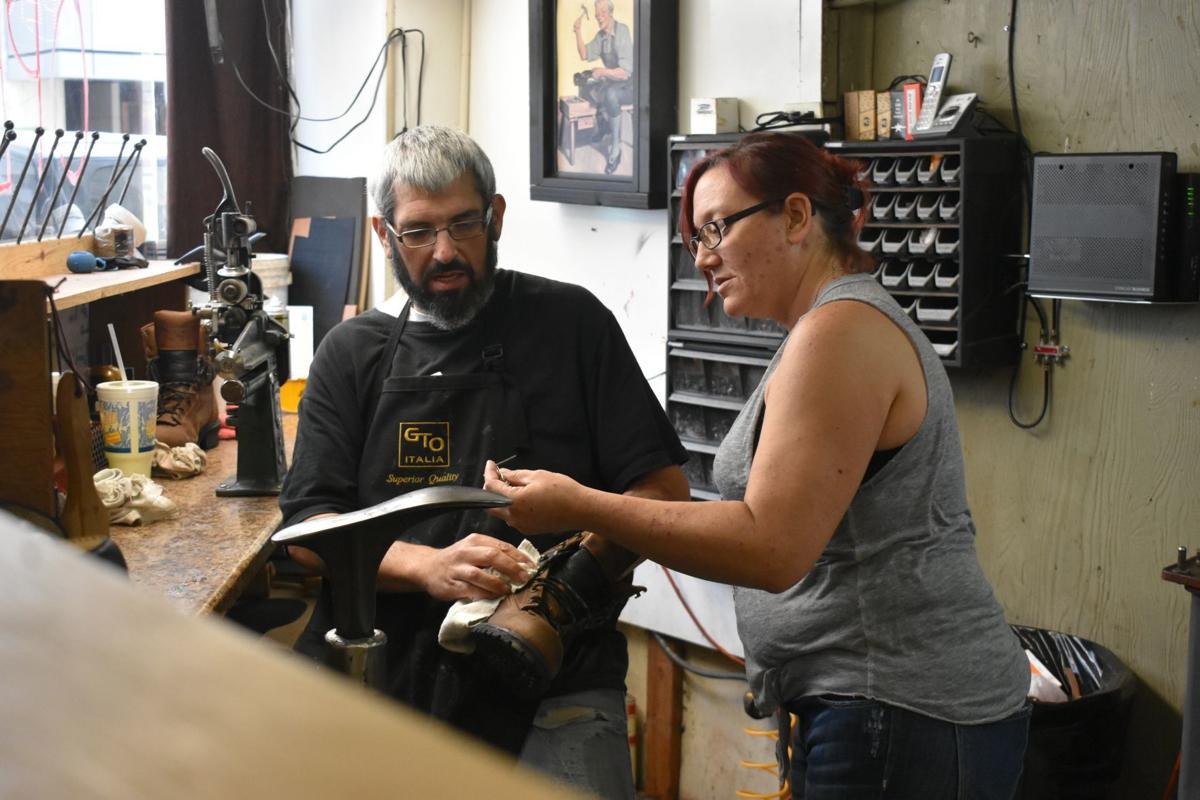 Marquitta Woodford shows Jimmy Garland — her partner and co-owner of Boaz Shoe Repair — a zipper for a purse she was repairing Thursday. Woodford and Garland bought the century-old shoe repair shop from Dewayne Boaz in February and reopened its doors in mid-June.

Jimmy Garland — one of the new owners of Boaz Shoe Repair, along with his partner Marquitta Woodford — works on a boot Thursday. The couple reopened the shop about two weeks ago, nearly five months after the 101-year-old local business closed its doors.

Marquitta Woodford shows Jimmy Garland — her partner and co-owner of Boaz Shoe Repair — a zipper for a purse she was repairing Thursday. Woodford and Garland bought the century-old shoe repair shop from Dewayne Boaz in February and reopened its doors in mid-June.

When Paducah’s Boaz Shoe Repair — a 101-year-old local business — closed its doors in December, west Kentuckians’ soles cried out over the loss of the legacy downtown shop.

After nearly five months with the lights off, the business is open again under the ownership of Paducah couple Jimmy Garland and Marquitta Woodford.

“I’ve always wanted a business of my own and I knew right off the bat this could be perfect,” said Woodford, who had been friends with the Boaz family decades prior to acquiring the business.

Garland’s thoughts were along the same lines.

“Who doesn’t want to be their own boss? I worked the same job for 11 years and before that another one for six and another one before for 10,” he said. “I thought we’d give this a try and see if we could make a go of it.”

When it first opened on Armistice Day in November 1918, the shop was known as Spillman & Burroughs Shoes. When they sat down their shoehorns and retired, H.G. Slaughter took it over for a few decades before selling it to Loyd Samuel Boaz Sr. in 1954.

About 20 years later, the Boaz family sold the business. It would change hands a few more times before Dewayne Boaz — Loyd Samuel Boaz Sr.’s grandson — took the shop over from 2015 until it closed in 2019. All the same, it’s been known as Boaz Shoe Repair for the better part of seven decades and the new owners never thought about touching the name.

“There wasn’t even a thought about it. This is what it’s always been. I came here with my dad as a little kid for him to get his boots fixed,” Garland said. “It’s always been Boaz for me, even when other people owned it through the years. I see no need to change that.”

Though the couple acquired the business in February, COVID-19 derailed their plans for a March opening. Since that time, they’ve been cleaning up the shop and getting ready.

“We came in and just cleaned it up and went from there,” Woodford said.

Thankfully everything from the last owners was transferred over with the purchase.

“When we got the place it was turnkey — inventory, equipment, zippers, laces, polish, everything,” Garland said.

Boaz Shoe Repair is open Monday to Friday from 9 a.m. to 3 p.m. or by appointment. Appointments can be set through the shop’s social media channels or by calling 270-201-2384.

The shop will continue to offer shoe, boot, belt and purse repair, as well as, cleaning, polishing and some leatherwork to its customers with the intent of eventually expanding its online presence and service offerings.

“We’re just getting on our feet here,” Woodford explained. “We want to bring a little bit of modern times into it … and eventually go online. I’d like to turn it into selling shoes. I want to do a whole lot more with it.”

While Garland and Woodford haven’t been repairing shoes very long, they’ve been practicing and learning some tricks of the trade from Loyd Samuel Boaz Jr., son of the shop’s namesake.

“(When we started into this) I knew I had Sam,” Woodford said. “A lot of it goes back to Sam. He’s a good man and he’s done a lot for us. He’s really been here for us and helped us figure out what we needed to.”

Garland added: “We’ve got Mr. Boaz at our disposal at pretty much any time we have questions. Sam is our go-to guy.”

Since reopening the doors on Fourth Street nearly two weeks ago, the pair has been blown away with the response.

“We were amazed. As soon as we put that ‘now open’ sign up, we were slammed right away,” Woodford said. “A lot of them are just glad we’re back and that it’s open again because it’s been here for such a long time.”