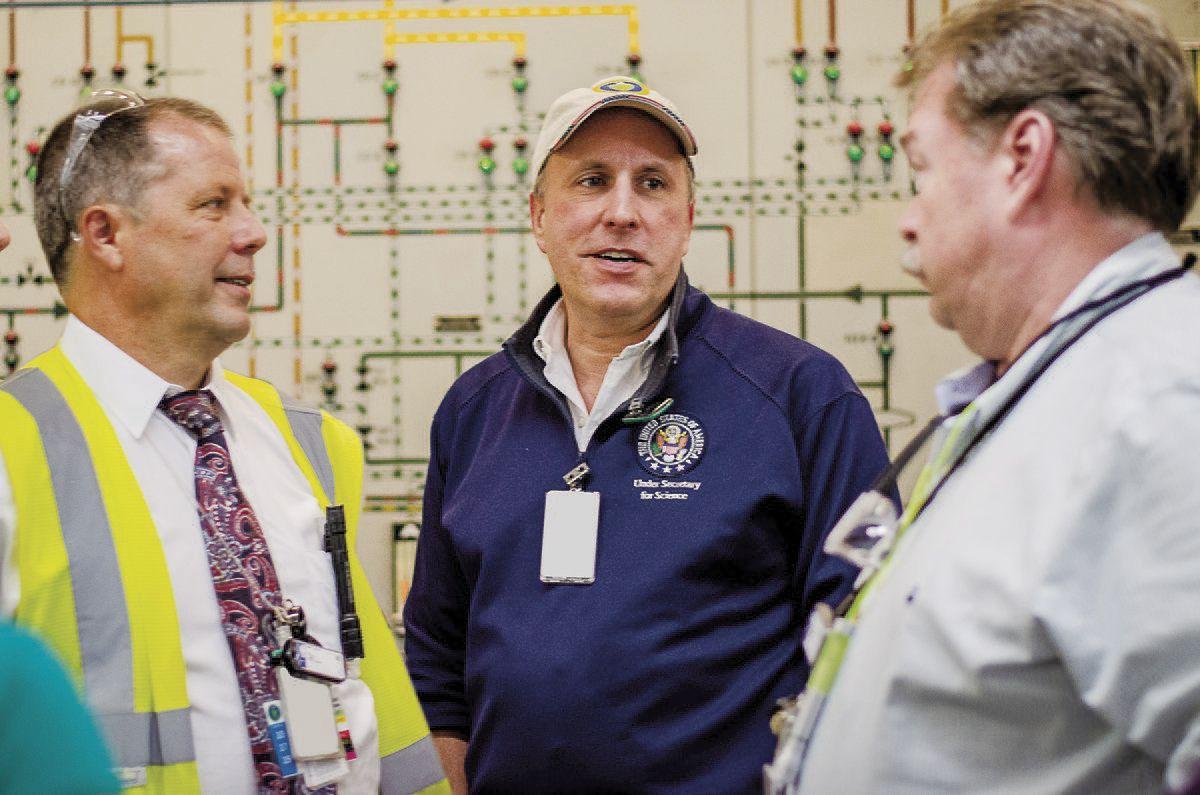 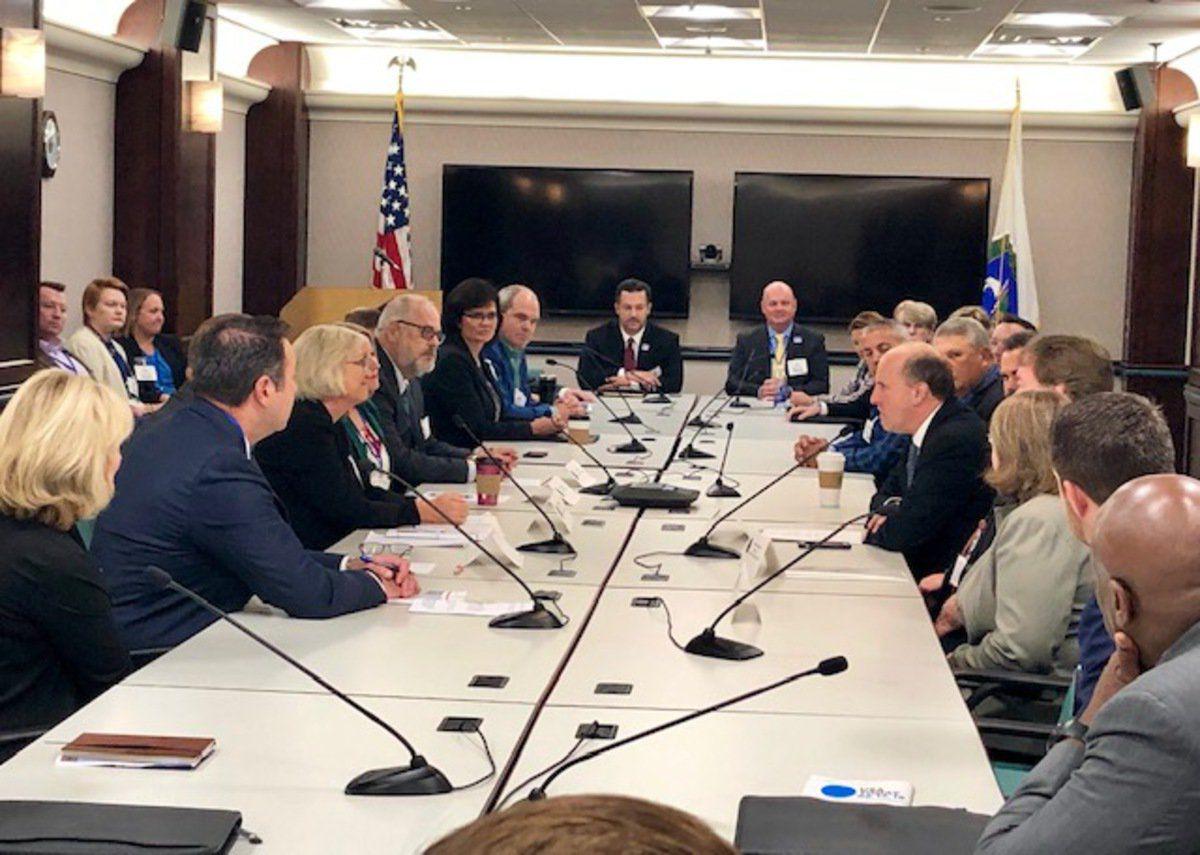 Paul Dabbar, at right in middle, meets face to face with members of the Paducah Area Chamber of Commerce during the organization’s annual D.C. Fly-In held Sept. 10-12.
Contributed photo 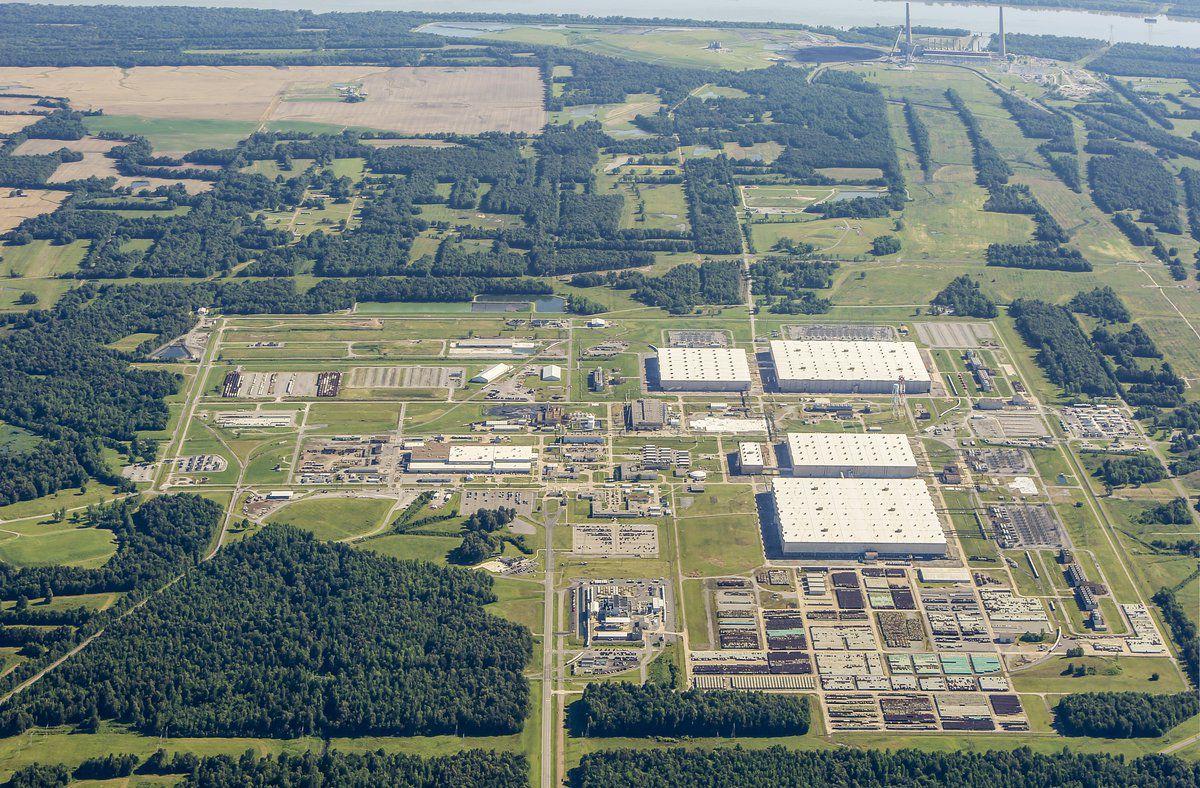 The U.S. Department of Energy’s Paducah Gaseous Diffusion Plant was constructed in 1952 to produce enriched uranium, initially for the nation’s nuclear weapons program and later for nuclear fuel for commercial power plants. Commercial enrichment was conducted under lease from 1993 until 2013, when operations ceased and the facilities were returned DOE for decommissioning and cleanup.
Contributed photo
1 of 3

Paul Dabbar, at right in middle, meets face to face with members of the Paducah Area Chamber of Commerce during the organization’s annual D.C. Fly-In held Sept. 10-12.
Contributed photo

The U.S. Department of Energy’s Paducah Gaseous Diffusion Plant was constructed in 1952 to produce enriched uranium, initially for the nation’s nuclear weapons program and later for nuclear fuel for commercial power plants. Commercial enrichment was conducted under lease from 1993 until 2013, when operations ceased and the facilities were returned DOE for decommissioning and cleanup.
Contributed photo

Paul Dabbar, the U.S. Department of Energy's under secretary for science, was familiar with the DOE's Paducah Gaseous Diffusion Plant before he took his first actual tour of the facility recently.

"I actually spent a bit of time dealing with the site when I was working on the privatization of USEC (United States Enrichment Corporation), so I knew quite a bit about it," Dabbar said, in an interview following the tour.

"Obviously, it was the last enrichment site in the country. And, so I think that transition that's occurred over the last few years from operation to environmental stewardship and cleanup, it's actually gone quite well."

He also manages the environmental and legacy management missions of the department, addressing the U.S. legacy of nuclear weapons production and government-sponsored nuclear energy research. Prior to becoming under secretary, Dabbar worked in operations, finance and strategy roles in the energy sector.

While the cleanup is going well, according to Dabbar, the process is going to take time.

How long, "is clearly measured in a few decades, not in the next 10 years," he said. "You want to move through things very methodically. There's not only just decommissioning, there's also depleted uranium that's also on the site. And, that's processing.

"It's basically a chemical processing of a gas. That's actually (going on) in parallel with the cleanup, so those two major missions are kind of concurrently going on at the site."

The long-term goal of site cleanup is to prepare it for future use.

"If you take a look at all the different sites across the Department of Energy that have been doing cleanup, when we started there were 107 sites around the country," Dabbar said. "We have completed cleanup in the last 30 years on 91, a very, very large amount. Of that 91, there have been 45 different locations in which commercial or recreational reuse has been handed over.

"So, basically that's around half of the sites we've completed cleanup and handed over for use by the community, whether it's business or industrial or recreational."

Industrial reuse is among the options for the Paducah site, Dabbar said.

"I know a lot of the conversation has been potential industrial reuse. Over the course of time and cleanup, depending on what the community wants to do, we want to be part of a dialogue."

Because of the long history with the site, the area's skilled workforce plays a key role in the ongoing decommissioning and cleanup efforts. Current staffing levels at the Paducah site are estimated around 1,100 people.

"We (the DOE) are not the largest employer in the area, but I think we're pretty close," Dabbar said. "We very much appreciate the capabilities of the workforce. This (workforce) is at the top end of performance of all the sites that we have. Things have gone very smoothly here. We work very well with the state and the local community."

The involvement of the community is also a plus, according to the under secretary.

"I get to engage with local communities across this country (where DOE has missions) and I can tell you that the chamber (of commerce) and the (members of the) community that comes to Washington, in terms of their ability to sit down with extremely serious, senior policymakers across a spectrum is at the highest level of any community," Dabbar said.

"They make people in Washington see that and, conversely, they get to meet with more senior people than any community."

Beyond what is going on at the Paducah site, Dabbar spoke about what he sees as the future for nuclear energy.

"Nuclear kind of runs like a spine through the Department of Energy," he said. "It really cuts across our defense, our science mission and environmental for power and applied areas.

"We think that nuclear has a great future in a number of those areas. If you take a look at some of the things that are going on, clearly, we think, nuclear power is incredibly important as a non-emitting source of power. That's baseload, meaning it's available 24/7."

According to Dabbar, the country has been looking at nuclear for Department of Defense power applications that can be used for mobile power, especially in mobile bases and islands and remote areas.

"Another thing that we've been doing for nuclear is that we have a very large kind of work stream looking at nuclear propulsion for spacecraft," he said. "Solar panels alone will not actually power a large moon base."

The department supports the mission of NASA, he said.

"They (NASA) are already purchasing components for the moon base. It's in execution. For us to do that, and ultimately go to Mars, we need a much more dense power source. We actually have a whole research string on how to build reactors for propulsion on rockets for moon and Mars colonies."

"If you look back, 10 to 15 years ago, the U.S. was a large energy importer. And, as a result of that, we were heading in the wrong direction," he said. "The amount of energy being produced in this country was slowly decreasing over the course of time.

"Over the course of the last decade, in particular the last couple of years, that has significantly turned around. We've turned from a big importer of energy to basically parity for the first time since the 1950s. And, we're about to be a net energy exporter and that's been driven by American technology and innovation.

"Across the board, there's been this giant increase in innovation, which has driven down coasts and increased the amount of available energy," he said.